India’s sewer cleaners keep working as they have no option 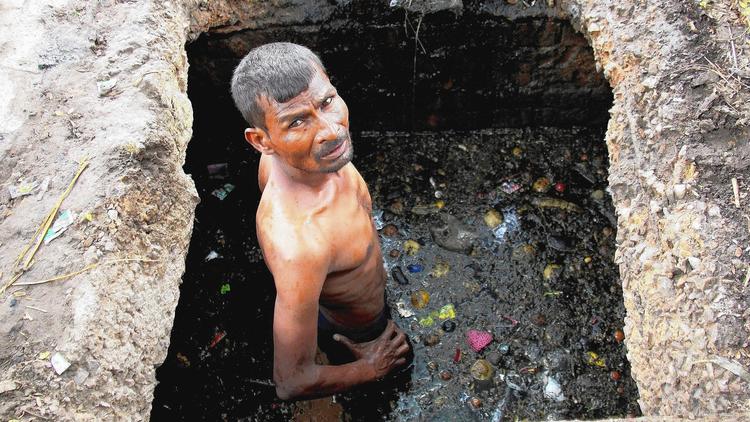 Devi Lal cleans a drain in New Delhi in 2012. A study found that 80% of sewage cleaners in India die before age 60 because of work-related health problems. (Sagar Kaul / Barcroft Media)

Dharamani Kale emerged from the manhole, sewage clinging to his body. Next to him, Sona Bai gathered filth in a small round basket and carried it on her head to the end of the street. The unpleasant process had started at dawn and would continue for at least 12 hours.

This is how sewers are cleaned in most Indian cities, including Mumbai, the nation’s booming financial capital: Workers use metal scrapers, brooms or their bare hands to clear drainage and sanitation lines twice a year, before and after the annual monsoon rains.

In gutters, workers who earn about $5 a day stand in the waste, which reaches chest high, and use long wooden sticks to clear jams. In some areas, workers crawl through the sewage, wearing no protective gear.

Even though we suffer from health problems and hear stories of workers dying in manholes, we cannot do anything other than carry on with our work. We have no choice.- Dharamani Kale, a sewer cleaner

Mumbai’s skyline is rising by the day, but the growth has come on the beleaguered backs of workers like these. Manual scavenging, as their work is known, was ruled illegal last year, but private contractors hired by the municipal government continue to employ them. Hundreds reportedly die from the work each year.

Many scavengers say they have no alternative.

“I have never been to school. But I want my kids to be educated. Therefore, I have to do various small jobs and this is one of them,” said Kale, a man in his mid-40s with wrinkles on his hands and face, who cannot read or write. “Nobody has ever told me that this is banned.”

“Filth and human excrement are a given, but sometimes we come across a dead dog or a dead rat as well,” he said. Broken bottles lurk in the pitch-black sewer system too, he said, pointing at his leg, which was covered with scars and cuts.

Although sewage cleanup has become mechanized in some areas, government figures suggest that 770,000 people either work as sewage cleaners or are supported by them.

The Tata Institute of Social Sciences, an educational and research organization, found that 80% of the workers die before age 60 because of work-related health problems. In Mumbai, an average of 20 sewer workers die each month from accidents, suffocation or exposure to toxic gases, the study found.

“Had an upper-caste [person] been entering the sewage system, we would have seen an uproar. But if a lower-caste worker dies, who cares?” Ranade said.

Activists say the government has not enforced a 2013 law that made it illegal to employ such workers. However, the law itself is contradictory because it also specifies tests that should be conducted before workers enter manholes, reflecting the difficulty of outlawing a job that employs so many Indians who would lack alternative work.

India’s new prime minister, Narendra Modi, promised to emancipate the poor and promote economic development, but advocates say that getting rid of jobs such as manual scavenging is not immediately practical. In 2007, the Ministry of Social Justice and Empowerment launched an effort to place sewer cleaners in other jobs; last year, it reported that 78,941 of the workers had been given assistance, a fraction of the total workforce.

Implementation of labor laws is generally poor in India, said Mihir Desai, former director of the India Center for Human Rights and Law, a nonprofit organization. Passing laws allows the Indian government to argue that it is in line with international standards, but politicians are less interested in ensuring that standards are enforced, he said.

The law, for which India’s high court set guidelines, applies nationwide. One of its manhole tests is simple: A candle is placed inside, and if oxygen levels are too low, the flame goes out. If there are toxic gases, the candle explodes. Assuming the situation is safe, workers must be fitted with harnesses before descending into manholes, which are as deep as 20 feet.

Kale, who said he doesn’t know his age, has been a manual scavenger since he was a youngster. He said he’s never seen tests carried out or even a first-aid kit at a work site. Standing on a narrow street lined by covered gutters, wearing a tank top and a dirty handkerchief around his right palm, Kale said that if he asks for gloves, his boss ridicules him.

“Boss wants us to get the job done at any cost,” Kale said. The boss was away from the work site, they said, and could not be reached for comment.

“They have not even offered us a cup of tea,” said Sona Bai, his co-worker, a middle-aged woman wearing a sari. If any suffer a workplace injury, getting the hospital bills covered is “a long shot,” she said.

The $5 wage for a 12-hour day is modest, even by the standards of India’s lower classes. But despite the dangers and the pay, few express second thoughts.

“We are illiterate and there is not much we can do to earn our bread,” Kale said. “Even though we suffer from health problems and hear stories of workers dying in manholes, we cannot do anything other than carry on with our work. We have no choice.”