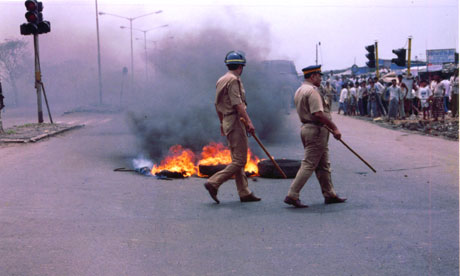 Police at a demonstration in India (from the film Jai Bhim Comrade) Photograph: Anand Patwardhan

Anand Patwardhan, whose work will be featured in the Sheffield documentary festival next week, is the foremost Indian documentary maker of his generation. Time and time again, in landmark films such as Bombay Our City (1985), In The Name of God (1992) and War and Peace (2002), he has exposed the glaring realities about topics on which modern-day India, wedded to its own PR flannel about becoming a first world economy, does not care to dwell: the rise of nuclear nationalism, the role of political and religious leaders in stoking communalism, the continuing oppression of poorer castes.

Yet Patwardhan, who was born in 1950, never wanted to be a film-maker. Nor, when in 1970 he arrived in Brandeis University, Massachusetts, on a scholarship, did he see himself as particularly political. “It was the most exciting time that one could have been in the US. The anti-Vietnam war protests were a turning point: I went on demonstrations and was sent to jail a couple of times. Other Indian students were more interested in being white than in identifying with black Americans, but I was reading Fanon, excited by the Black Panthers and taking classes in the black studies department.”

Documentaries have always been made in India (and in recent decades there have been prominent examples by directors such as Shyam Benegal, Mani Kaul and Meera Nair), but they rarely receive the distribution or critical attention afforded to Bollywood movies. What’s more, when Patwardhan was starting out in the 70s, having gone back to India and become involved in a people’s movement in the state of Bihar, all non-fiction features were government controlled and, as he puts it, “straight-forward propaganda of ministers cutting ribbons”.

Waves of Revolution (1974) chronicled the upheavals in Bihar, giving voice to a broad coalition of dissenters – students, Gandhians, poor people – excluded from mainstream discourse. Made for virtually no money, using Super-8 film and a cheap cassette recorder for the sound. It established Patwardhan’s reputation as a fearlessly independent maverick operating outside the system. According to Nair Anand was and remains an anomaly. “There’s no one like him …He’s always pursuing an uncomfortable zone and actualising the conflicts in his films. He’s a barometer of integrity.”

One of Patwardhan’s most celebrated films, Bombay Our City, spotlights the immiseration of Dalits whose make-do shelters were constantly being torn down by developers, as well as the casual contempt for them on the part of local elites. Patwardhan depicted Dalits questioning his motives: “You just want to earn a name taking photographs. So don’t take photographs of the poor.” He also included footage of local bards singing songs of poetry and protest, wild songs that revealed, as Frederick Douglass found in the spirituals of black slaves, “the highest joy and the deepest sadness”.

Patwardhan’s latest film Jai Bhim Comrade begins with a clip from Bombay Our City that shows the charismatic singer, poet and activist Vilas Ghogre in full melodious flow. In 1997, however, following the police shooting of 10 unarmed Dalits protesting against the desecration of a shrine to Bhimrao Ambedkar (1891-1956), a visionary leader who was born an “untouchable”, Ghogre hanged himself. His suicide is the starting point for a carefully constructed, far reaching, and by turns pensive and enraging examination of how Dalit men and women are still mistreated by the upper classes and even by some of the politicians who claim to speak for them.

The Latin American “Third Cinema” movement of the 1960s – decrying art for art’s sake and calling for film-as-revolutionary activism – has always been important to Patwardhan. His documentaries, which have frequently riled censors, are for ideological as well as economic reasons ill-suited to the world of the modern Indian multiplex: Jai Bhim Comrade, he says, has found its most passionate and intelligent audiences among the very people whose lives and struggles it chronicles.

“All across Maharashtra [where it’s set] the film is in constant demand: we bought a powerful video projector, made a foldable 20ftx30ft screen and for the past five months have done regular open-air screenings in working-class and Dalit neighbourhoods, organised and sponsored locally. As people cannot afford to hire many chairs, the audience squats on the floor or, incredibly, stands through the entire three hours of the film. We wait for darkness before we begin and the film often goes past the 10pm cut-off point when loudspeakers are officially silenced. But at many venues the local police, who often came from the same caste and class background as the audience, look the other way.”

Jai Bhim Comrade is an inarguable rejoinder to anyone who assumes recent legislation concerning Dalit schooling and quotas for state-sector jobs means that the age of discrimination is over. “All you have to do is to look at the statistics,” Patwardhan says. “Across the country, two Dalits are killed and three raped every day.” The eloquent social critiques delivered by its subjects, as well as the fire and lyrical fervour in their ballads, oratory and street-theatre performances, bear out the claim, delivered by one interviewee: “In every lane there’s a poet, and in every hovel there’s a singer.”

Well over a decade in the making, Jai Bhim Comrade could be seen as a capstone to Patwardhan’s extraordinary career. When I put this notion to him, he was characteristically reflective: “Almost every film that takes a long time to make feels like the last film I will ever make, feels as I have said everything I ever wanted to say. Right now that is how I feel about Jai Bhim Comrade. I am content with the thought of just doing more and more screenings and discussions, and seeing how people grapple with it. After 14 years in labour, I am enjoying the joys of parenthood.”

Jai Bhim Comrade premieres in the UK on 14 June, as part of Sheffield Doc/Fest.