Traditional owners have launched a fresh legal challenge to Adani’s proposed Carmichael mine, declaring they would go all the way to the high court to stand as the last “line of defence” against the contentious project.

Wangan and Jagalingou opponents of the mine on Tuesday went to theQueensland court of appeal to dispute the state mining minister’s approval of Adani’s mining leases.

In launching their fourth simultaneous legal challenge to a project that would override native title on most of their country, the Wangan and Jagalingou traditional owners’ council criticised Adani group chairman Gautam Adani for ignoring their request to meet during his Australian visit to promote the mine.

Spokesman Adrian Burragubba said the council was “offended that Mr Adani failed to even acknowledge our concerns”.

“But the offence is minor compared to the way Adani mining and the Queensland government have treated us and our rights,” he said.

“Not once have they had the decency to speak to us as they plan their takeover and destruction of our ancestral lands and waters.

“Every step of the way they have undermined us, opposed us and attempted to coerce us into accepting a pittance for relinquishing our native title.”

The group’s lawyers in the appeal court will argue the Queensland resources minister, Anthony Lynham, denied them natural justice by obtaining information from his department on native title issues outside the objection process to issue the leases.

They argue Lynham did so without giving them the chance to respond and before a land use deal between Adani and supporters of the mine within the Wangan and Jagalingou, which is being separately contested.

Lynham also did not wait for the outcome of a federal court judicial review on whether the National Native Title Tribunal (NNTT) was right to allow the Queensland government to issue mining leases after the Wangan and Jagalingou claim group rejected a deal with Adani in 2014, they argue. 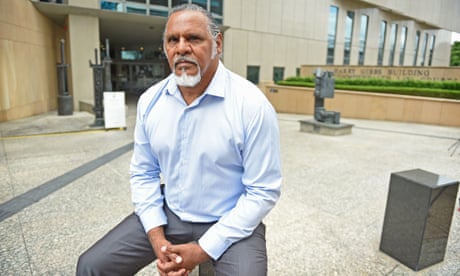 The government argues the Mineral Resources Act does not afford natural justice, in line with an earlier finding by federal court judge John Bond.

The council’s solicitor, Colin Hardie, claimed there were “reasonable grounds” to argue a denial of natural justice by Lynham in issuing the leases.

Hardie said the group was also “very concerned about the conduct of Adani mining”, which this year gained for the first time the support of a slim majority of Wangan and Jagalingou native title applicant members for a crucial Indigenous land use agreement.

“There appears to be a very deliberate attempt to engineer an ‘agreement’ to promote their interests at the expense of the rights and land of the traditional owners,” Hardie said.

The Wangan and Jagalingou council also filed an objection this week to the NNTT’s registration of an Indigenous land use agreement authorising the mine, flagging a federal court bid for an injunction.

Wangan and Jagalingou opponents of the Adani mine are also trying in the federal court to have their native title applicant group changed, which would swing the balance of the 12-member claim group back in opposition to the mine.

The argue a claim group meeting in March saw four families vote to remove their representatives because of dealings with Adani, including discreet payments.

Wangan and Jagalingou supporters of the Adani mine contest the legitimacy of the March meeting, saying their own subsequent meeting in April overrode any of its actions and authorised a land use deal with Adani.

Wangan and Jagalingou mine opponents, in their objection to the NNTT’s registration of the Indigenous land use agreement, have argued “the meeting that purported to authorise the agreement [was] ‘a sham’”.

They have filed materials to argue the meeting was “composed of a ‘rent-a-crowd’ of persons who had never previously identified as Wangan and Jagalingou”.

They have flagged also taking out an injunction against the NNTT’s approval of the Indigenous land use agreement.

Wangan and Jagalingou youth leader Murrawah Johnson said the council had “vowed to do everything in our power to stop the mine proceeding, and we will take our concerns to the high court if necessary”.

“We are not easily intimidated. We will fight this mine until Mr Adani and his people pack their bags and head home,” Johnson said.

Human rights lawyer Benedict Coyne is handling the fourth legal action by the mine opponents, a separate federal court appeal against justice John Reeve’s ruling that the state government could issue mining leases over the W&J’s 2014 rejection of a deal with Adani.

Coyne said that case would “test what we see as profound deficiencies in the way the native title system can allow companies and governments to force traditional owners to accept outcomes they do not want”.

“Too often the native title process works to dispossess Aboriginal people of their land and rights, rather than deliver a just settlement,” Coyne said.

Burragubba said the group was “constructing a legal line of defence because the Queensland government and Adani are trying to bulldoze us aside”.

“We are acting in the courts to stop this destructive project. Our people, the Australian community, and the world deserve better than this cavalier, unjust and outdated approach to our shared future.”https://www.theguardian.com/environment/2016/dec/07/indigenous-owners-launch-fresh-legal-challenge-to-adanis-carmichael-mine