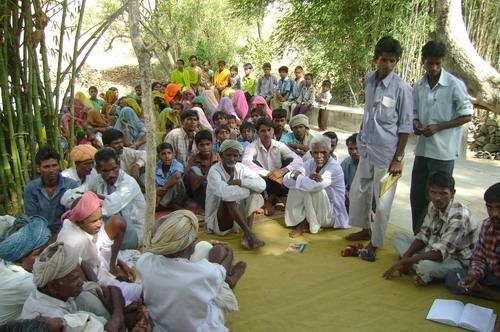 Villupuram (Tamil Nadu): In yet another inhuman incident of caste atrocity, three elderly Dalit men were forced to prostrate before the members of a village panchayat and apologize following a quarrel between two groups over organizing a music function in the village.

The incident came to light after a video of the incident went viral on social media platform.

The local police stated that the members of the dalit colony in Ottonandhal Panchayat near Thiruvennainallur had organised a music function. Later, Hindu caste people from the village had lodged a complaint against the dalit community in local police station for organising the function during the pandemic.

Moreover, the police said that after receiving the complain a team from Thiruvennainallur police station warned the organisers and seized the equipments including mikes and speakers. The police later returned the equipments. Subsequently, a group from the colony reportedly questioned a youth from the village for lodging a police complaint over the event and this led to an altercation between the two groups.

The police enquiry said that though the matter was initially resolved it was later escalated after the panchayat decided to resolve the issue on its own. The panchayat made three Dalit elders from the colony to prostrate before them and apologise for the sequence of event.

Superintendent of Police S.Radhakrishnan said, “A team had been deputed to the village to identify the men and arrest them. A case has been booked against them under the Scheduled Castes and the Scheduled Tribes (Prevention of Atrocities) Act.