Internet trolls, the moral police and an intolerant India 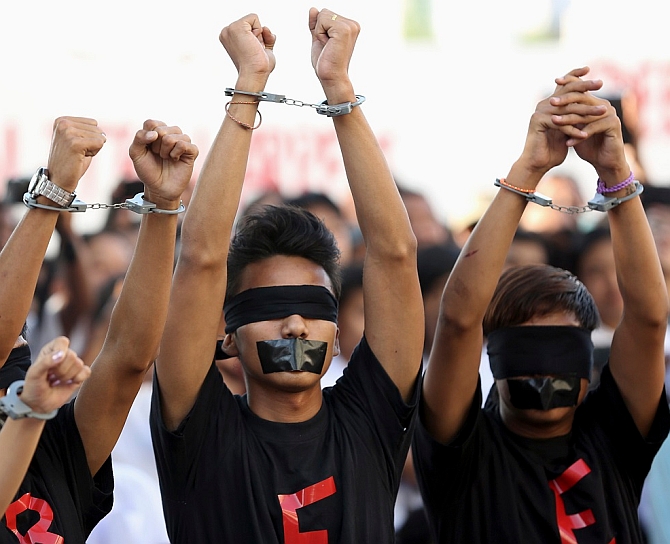 India has always been pluralist, hypocritical but accommodating. Mumbai, despite riots and several bomb blasts, has moved on steadfastly, not succumbing to the larger plan of many groups to make it an intolerant city.

But things seem to be changing. From the streets to online, there is growing intolerance. People seem to be ready with ammunition to attack anybody with an opposing view.

My city and India seem to have become intolerant of any opinion that is contrary to the larger, politically-held one and anyone seeing to be opposing it will be dealt with by the moral police, Internet trolls or haters that can haunt you in real life or virtually.

For the life of me, I have not understood how it makes me or any others who hold a contrarian view anti-national and less patriotic. Those who opposed the hanging were accused of being anti-national and some demanded that they be tried for sedition.

Interestingly, these patriots somehow know sedition and other such sections partially, but have not cared to read the fine legal print in the Memon case. Well, they couldn’t be bothered with the finer details since their aim is to only attack anyone who opposes their point of view.

If this was not enough, my column on Rahul Gandhi last week received extreme flak from the bhakts of the Bharatiya Janata Party and other right-wingers.

Firstly, I strongly believe people need to inculcate a discipline of ‘reading’ properly. My column did not insinuate that Rahul Gandhi is fit to lead the country. I just mentioned that I observed a stark change in him and thought I would give him my advice.

The kind of name calling I faced for this column was not amusing. Being called a ‘presstitute’ and accused of being paid (by the Congress, I guess) for writing in its support is extremely humiliating. Worse still, these attacks are by anonymous people faking their identity.

These people do not have the guts to reveal their true selves. They are obviously being paid or hired to hit out at anyone who displays a contrarian view.

And — this is the scary part — anyone can be attacked at any time and the attackers cannot be exposed. Worse still, their attacks are justified by those who believe in the so-called majority view.

Intolerance is growing in our daily life, most often in the form of moral policing. These when reported are sensationalised and give the impetus to others to contemplate similar attacks. A few years ago the residents of Mumbai’s tony Carter Road installed CCTV cameras along the seafront promenade to expose cuddling couples. The move was backed by the local police who seem to be more focussed on these couples than in trying to prevent major crimes.

Thankfully, when this was reported in the media, there was outrage across the city that forced the removal of the cameras. Similar moral policing was recently seen in the suburb of Malwani in Malad, where consenting couples were arrested from a few lodges. This also led to public outrage.

This intolerance has now received legitimacy from our administration and political system.

The government, instead of tackling larger issues like strengthening the economy, creating more jobs and most of all creating an environment of inclusive development, seems to be more interested in determining what I should eat, who I should have sex with, where I should go for a rendezvous, what I should wear and whom I should to pray to.

If there is a semblance of any opposition then it is combated with violent reactions and sometimes threats of physical violence.

A tolerant State is Utopian, as many sociologists say, but that is what society needs to work towards in order to become modern and ‘developed.’ Intolerance is a mark of regression as is resistance to allowing an alternate truth from being discovered.

By being intolerant, we Indians are depriving ourselves of a chance to discover the truth and denying the right to our society to become better informed.