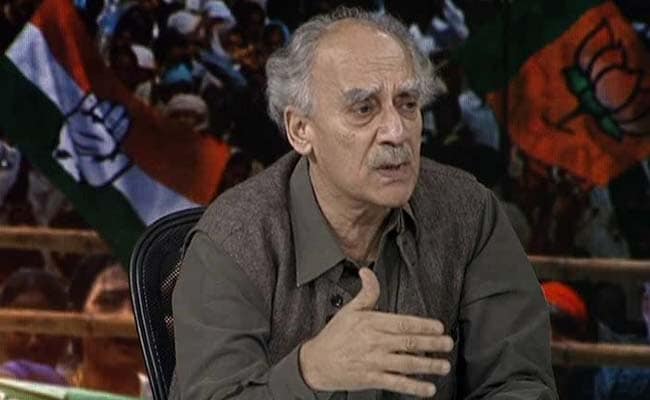 NEW DELHI:  Former union minister Arun Shourie has said that he has been the target of severe abuse online by BJP supporters ever since he turned a critic of Prime Minister Narendra Modi. Mr Shourie, a one-time admirer of Mr Modi, also said that the BJP supporters did not even spare his son, who has cerebral palsy.

“If you gave me an opportunity to read the kind of abuse that has been hurled at me and my handicapped son, your viewers will be horrified,” Mr Shourie told NDTV, citing one such insensitive remark. “They wrote, ‘Iska mental son hai, woh aur bhi mental banega.’ These damned fools are followed by the PM on the social media,” he said.

A visibly upset Mr Shourie made the remarks during a discussion on the perception that the BJP’s election campaign in Bihar was negative and often divisive. “The result of this election has been that the direction the country was being hurled, which was division, which was abuse, has been blocked by the people of Bihar.”

Vinay Sahasrabuddhe, a senior BJP leader who was also present on the panel, condemned the online abuse, saying it was regrettable. “It really is very painful to know that there were certain kind of remarks on the social media,” Mr Sahasrabuddhe said, adding that PM Modi had warned against hate speech in his interactions with supporters on social media.

“Narendra Modi, while interacting with the BJP supporters, very clearly told them that they have to mind their language. Social media is not a platform for spreading hatred,” he said, referring to the PM’s meeting with 150 ‘social media influencers’ in July this year.

But Mr Shourie alleged that several of these ‘influencers’ were abusive on Twitter, and that despite their continuing  abuse, the PM followed them on the micro-blogging site.

BJP spokesperson Vinay Sahasrabuddhe present on the panel expressed disappointment over the type of treatment meted out towards Shourie. In an apologist manner, he cited the advise given by the Prime Minister to social media users urging them to stop using the platform for spreading online hatred. “Narendra Modi, while interacting with the BJP supporters, very clearly told them that they have to mind their language. Social media is not a platform for spreading hatred,” he said.

However, countering him, Arun Shourie pointed out that the miscreants who hurled abuse at his mentally challenged child are followed by Narendra Modi himself. “These damned fools are followed by the PM on the social media,” he added.

Shourie, who once was an admirer of Modi turned critical of the Prime Minister alleging him of failing to live up to his pre-poll promises. In a recent public gathering, Shourie went on to say that the current PMO is the weakest ever, and the people of the country are now recalling the tenure of Dr Manmohan Singh.