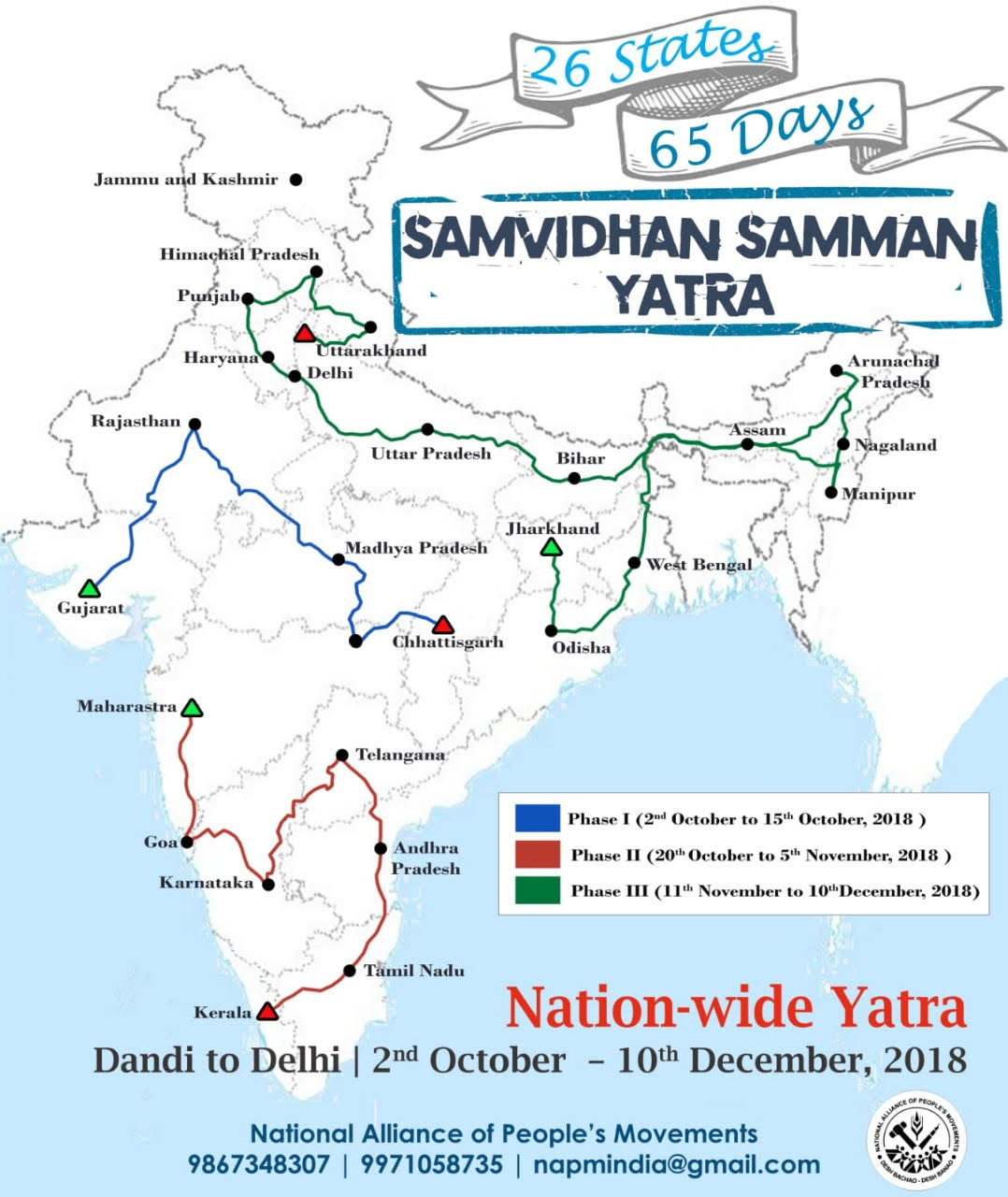 Against Hate, Inequality, Violence and Loot of Resources

People of any democracy are called upon to assert themselves once in a while. That assertion has to be more active than mere voting at elections. It has to ensure that the core values that we all cherish, those that the generations that fought for our freedom gave us through our Constitution are protected and nurtured to make the various pillars of democracy accountable to We The People. Over the past 72 years, our democracy, based on our Constitution, has survived numerous elections as well as social, economic and political upheavals and has managed to sustain to this day, despite being besieged with umpteen challenges. However, the last four years of political journey and churning in this country has in numerous and fundamental ways shaken the ethos and fabric, which many of us probably took for granted as secure.

In order to invisiblize its draconian, corporate-friendly, anti-people economic and political policy and to drown out popular awareness, questioning and resistance to the burning issues, the present Government and its ‘Parivar’ have used slogans, statements, diversion, obfuscation, brute force, troll armies, lynch-mobs etc. to misguide, dis-empower, attack, arrest, loot and even kill people, in particular muslims and dalits, repress farmers, workers, women, students and other sections, silence & jail (also shoot) academia, activists, writers, thinkers and anyone who dares question. All this, even as multi-crore scams kept surfacing, multi-millionaires keep fleecing and fleeing the country under the nose of the Govt and thousands of crores of loans waived off for large corporates. Every Day Has Thus Been and Become an Undeclared Emergency ! The blood and bruises of our people in Mandsaur, Toothukoodi and elsewhere is fresh in our minds ! It is indeed a time of alarming fascist onslaught with lawlessness and impunity!

The agricultural distress and suffering of working classes is so over-whelming, the injustice against dalits and adivasis so gruesome, violence and mob-lynchings of muslims so ubiquitous, the crackdown from primary education to universities and students so brazen, privatization of health, education, assault on reason and dissent and complete neglect and sell out of social sector, the persecution of women and transgender persons so atrocious, the big promises about jobs and black money so hollow, the supposedly big-bang attempts such as demonetisation and GST so upstartish and the attempts at destroying the pillars of democracy, our Constitution, our basic values and social fabric so systematic that, in spite of a pliant, sold out media and pressurised judiciary, the tide had to turn, and it has already started turning. The Vibrant Gujarat Model has Utterly Failed. It is now increasingly becoming clear that neither bribe nor bullet nor bullet train can silence people for too long or prevent the harsh reality from expressing itself. The challenge before all sane and sensible people and groups of this country is to be able to cohesively forge a spirit of coming together, fight for alternatives in a concerted manner to the destructive, divisive and distorted regime ruling us, ruining us.

We have been witness to foul politics at play, bending democratic electoral processes and violation of constitutional norms in states of Uttarakhand, Manipur, Meghalaya, Delhi and Goa; subversion and hijacking of judicial processes, misuse of the investigating agencies and systematically eroding the credibility and legitimacy of every autonomous institutions in the country, even as every institution, every space is sought to be communalized. The once reliable public banking system is no more bankable, they have been looted of crores of rupees by white collar criminals who are now safely out of the country and are leading a life of luxury in foreign countries. The textbooks, syllabus and the plural history is being re-written to build a vicious Hindutva narrative and the seeds of lies, disbelief, disdain and enmity are being sowed. The progressive and people-oriented laws, enacted after decades of struggles by people’s movements whether on land, forests, environment, labour, right to information, anti-corruption, etc. are being amended in a concerted manner to facilitate corporate loot, plunder of community resources and promote crony capitalism. The government is becoming the biggest violator of the parliamentary and constitutional democracy today and usurping the power, space of local governance bodies as well as smaller parties.

We are standing at crossroads and passing through a critical juncture in India’s history and have a historical responsibility to save and salvage the ethos of this country, to fulfil the dreams of social, economic and political justice that Dr. Baba Saheb Ambedkar envisioned. There is an overwhelming urgency to come together, beyond diversity of perspectives, to safeguard the constitutional values and principles of humanity, based on social justice, liberty, equality, fraternity, scientific and rational thinking in the social psyche to deal with all these political, economic, social, cultural challenges. The need of the hour is to create understanding and tolerance in society, by peaceful, democratic and constitutional means. It is equally vital to aim for economic equity, social parity, environmental protection, sustainable development, establishment of people’s rights over access of resources and annihilation of caste and patriarchy.

It is with this urgency and spirit that National Alliance of People’s Movements (NAPM) has, after numerous discussions, planned to embark on a Samvidhan Samman Yatra – a nationwide tour to restore and protect the core values of our Constitution and democracy, at a time when there is an all-out attack on the Constitution, people’s rights, livelihoods, environment and the spirit of diversity in the country, even as massive scams, resource loot and dilution of laws are taking place and farmers, workers, students, employees, women, dalits, adivasis, muslims all are on the streets asserting their rights, spaces and freedoms.

The Yatra shall commence on 2nd October, 2018 from Dandi, Gujarat the place where Gandhi led his famous salt march in 1930. It will travel through various States in the country holding meetings, discussions, public events, supporting struggles, sharing grief of victims of the violence and hate and spreading message of plurality, love, peace and social justice. The Yatra shall culminate by a Jan Sansad in Delhi on 10th December, 2018, the International Human Rights Day. Representatives of peoples’ movements, prominent activists, thinkers, academics, cultural activists, students and others will participate in the Yatra. We invite other comrades, sathis, movements, institutions, organisations and forums to come along with us and endorse the yatra. Everybody who subscribes to the core values of the Yatra are welcome to participate either for the full period of the Yatra as well partially. The Full Yatra route is enclosed.

The Yatra would be undertaken in the following phases:

Kashmir Phase: Proposed to be undertaken between Phase-I and Phase-II

We urge you to join the Yatra and contribute your utmost towards this effort, whether in terms of your time, skills, energy, resources, contacts etc and be a part of the Yatra-related preparations and the Yatra over the next few months.

You can help in one or more of the following ways:

Endorsing the yatra on behalf of your organization / network.
Reaching out to other groups etc and spreading the message.
Joining the yatra partly or fully and volunteering during yatra.
Offering to organise programmes in your area.
Volunteer to help in planning, coordination and logistical support.
Volunteer in dissemination of materials and publicizing the yatra.
Sending us notes, photos etc. of the struggles in your area, so that we can include it our state-wise notes.
Raising resources and providing financial contributions for the yatra. Get in touch with us to know how you can extend support. See contact details at the end.
Assisting with basic research, compilation and documentation on a cross-section of issues, making posters, banners, typing and translation, media and communication, using multiple forms of new and creative media to convey powerfully the spirit of the Constitution in simple yet catchy ways.

Please do let us know at the earliest if you would like to be part of the Yatra and its preparations and can volunteer with us.

It would be great if you could mention the time that you could give and in what form/s would you like to contribute. Come, let’s work together to save the letter and spirit of our Constitution

Tentative: Separate Team for Jammu and Kashmir between Phase I and Phase II.

**While the state-wise dates are final, many of the locations within each state are proposed / under discussion and shall be finalized in due course, based on consultation with local groups.

India - Over 400 manual scavengers die cleaning filth but not a single conviction
Don't we have the right to get married too? #disability
Bihar Panchayat demands Rs 50,000 from couple as 'tax' for inter-caste marriage #WTFnews
Radhe Maa sits in SHO’s chair at Delhi station as cop stands with folded hands #WTFnews