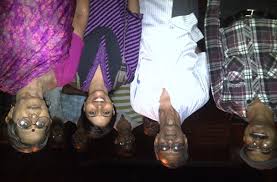 editor of a well known magazines and literary persons were arrested in
2010, were arrested from Khuldabad, Allahabad. Their ‘crime’ was that
they possessed literature of Bhagat Singh. The state saw them as ‘potential
terrorists’ as threat to the country. They were sentenced for life on charges
of criminal conspiracy, waging war and under several provisions of the
draconian Unlawful Activities Prevention Act (UAPA).
As the Organising Secretary of People’s Union for Civil Liberties (PUCL) in
Uttar Pradesh and editor of the  magazine Dastak Seema had
consistently reported and gave  voice to the growing dissent of the
people against the anti-people  policies of the government in the
form of Ganga Expressway which  brought forth the nexus of the
politicians, bureaucrats and the  land mafia. As we may recall the
Ganga Expressway can result in  the displacement of thousands of
peasantry. It was her initiative to  expose the increasing arbitrary
arrests, torture and incarceration  of Muslim youth in Azamgarh.

The magazine Dastak became a vehicle for expressing the voice of the
voiceless. And this is precisely what the government would want us to
believe as ‘waging war against the state’! And this is why the police officer
would find fault with both of them, for ‘waging war’ with the state, for
reading Bhagat Singh at a time when the state is flaunting a sham ‘growth
rate’, but the material condition of the people are deteriorating every day!
The verdict against Seema Azad and Vishwa Vijay w against the grain of
fundamental rights of the people of the subcontinent as it goes a long way
in criminally profiling any political dissent or opinion or even spreading
that as ‘waging war’ against the state. The state would tell us how we
should think and express ourselves. We can be only part of the state in
‘managing’ the perception of the people.

Seema and Vishwavijay were finally granted bail by the Allahabad High
Court this August. Huge public pressure that was mounted on the court by
consistent campaign by civil rights and democratic activists finally forced
the court to grant them bail. Although this is indeed a huge victory for the
democratic movement, it is also a grim reminder that even now thousands
of activists including cultural activists are still being incarcerated after
being framed as ‘terrorists’ or ‘extremists’ just because they dare to raise
their voices against exploitation and oppression of the people. Sudhir
Dhawale, Jeetan Marandi, Deepak Dengle or Utpal Bashke are a few
among the thousands who are languishing in various jails of the country,
charged with the ‘crime’ of being fearless cultural and literary activists who
stood by people’s resistance for land, livelihood and dignity. The fight to
release all these political prisoners must go on. As a part of that effort, we
invite you to this convention, where along with Seema and Vishwavijay
many other well known poets and writers will raise their voice against the
war that has been declared on our
fundamental rights by the Indian state.

3rd of September in SSS Auditorium JNU at 2pm.