Mumbai, June 23: Prominent social, educational, religious and human rights Muslim NGOs, based in Mumbai, strongly condemn the human rights abuses and unchecked killing spree of innocent people in Iraq and Syria, whether it is by the ISIS(L), the forces of Bashar-al-Assad or Iraqi Army under Noori-al-Maliki. 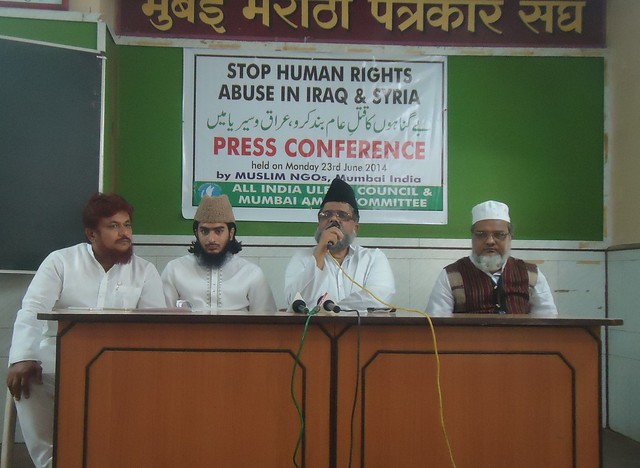 We strongly decry the terming of the conflict in Iraq and Syria as a Sunni-Shia clash. The fighting in both these countries needs a political solution because the people are fed up of the two inept governments and are eager for change, the change must come.

The people of the two countries tried to press for their demands but the arrogant and power-hungry governments did not pay any heed to them and so the people had to come out on the streets, which ultimately spread to an open civil war where innocent men, women and children are the prime sufferers.

We appeal to the USA, Iran, Saudi Arabia and the other power houses in the region not to interfere in the internal matters of these countries. They should let the matter be solved by the people themselves through political dialogue rather than use of arms.

The media should stop the portrayal of the fighting as a sectarian clash between Sunnis and Shias but as a genuine outburst of political unrest in the region.

The sheer scale of killing of men women and children and displacement of an estimated 50 million people is unprecedented since World War I. Measures must be taken to stop the killing of innocent women, children and old persons who are bearing the brunt of the misery.

India has no stake in this conflict thus Indian citizens must not be harmed and those held captive by the fighting fraction should be released immediately on humanitarian grounds.

We appeal to the UN and the international community to urgently seek a solution to the humanitarian crisis unfolding in the region. And we do appeal to the opposing forces to respect human rights of all citizens by all means.

Caste in Indian Cinema - New voices but not enough noise
UAPA case against ex-journalist Prashant Rahi falls apart, acquitted after 14 years
Why South Africa's health minister is so worried about India caving in to big pharma
#RohithVemula: Open Letter to the President of India by IIM-Calcutta Students