Is it Mathura’s Turn? Krishna Janmabhumi issue being revived 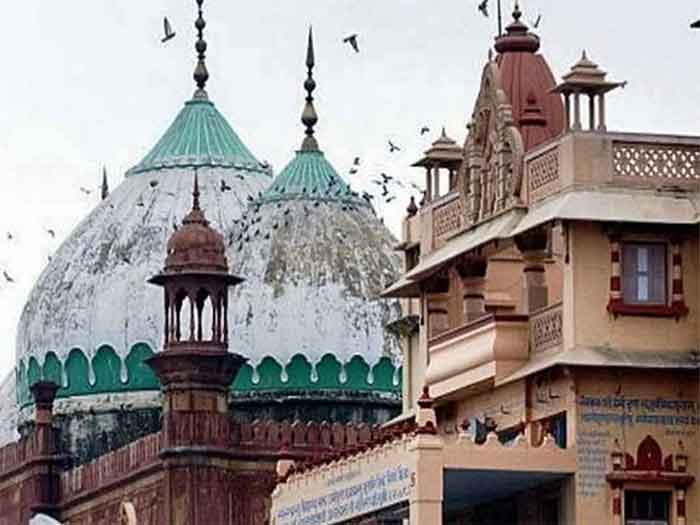 UP elections are forthcoming in few months. Many of those political analysts with their ears to the ground are of the opinion that the popularity of BJP, Modi-Yogi is on the downslide due to multiple hardships which average people had to face in recent times. The corona migration, the farmers movement, the peaking of unemployment, the rising prices, the abysmal state of health care seem to be pulling the average people out of the grip of communal polarization which has been inflicted upon them during last couple of decades. It is in this context that tweets of Keshav Dev Maurya, one of the deputy Chief Ministers of UP, have to be seen.

Boasting his government’s law and order, he also gave a divisive dog whistle and tweeted that their administration has ensured to get freedom from crimes, abduction, land occupation, by the lungiwalas with woven (Jalidar) caps, hinting at Muslims. Also at another level he tweeted, preparations of building up a grand temple at Ayodhya and Kashi are on and Mathura would be next. Many a communal outfits threatened to do rituals in Idgah on 6th December.

That temple-mosque issues as rewarding issues were picked up in 1984 and then 1986 when VHP resolved that Lord Ram (AYodhya) Lord Shiva (Varanasi) and Lord Shrikrishna (Mathura) are to be converted into grand temples. While demolishing Babri Mosque, their slogan was that this is just a beginning, Kashi and Mathura are next. This despite the Religious Places act of 1991, which says that there will be status quo in matters of places of worship, as it was on 15th August 1947.

Temple mosque issue has been one of the powerful weapons in the hands of BJP-RSS for electoral gains through communal polarization. They have practically demonstrated this through their Ram Temple campaign leading to Babri demolition and building of Ram Temple.

Even in case of Babri Mosque their claims were all made up one’s. The Supreme Court despite many of the slips did say that 1949 installation of Ram Lalla idols in the mosque was a crime, that the demolition of Mosque in 1992 was a crime, that there is no evidence that there was Ram Temple underneath and finally there is no proof to say Lord Ram was born precisely at that spot. But despite all this Ram Temple campaign and Babri demolition yielded rich dividends for the divisive politics leading to the present assertive domination of the right wing politics in the country.

Temple destructions by Muslim Kings in the times gone by have been popularized through myriad mechanisms to make it a part of social common sense. Undoubtedly temples were destroyed by Muslims kings, but they were also destroyed by Hindu Kings. Somanth temple has been associated with Mahmud Gazni, but was it a religious matter or was it to plunder the wealth of the temple is question in the realm of logic.

Kalhan’s Rajtaringini tells us about 11th Century King Harshdev, who appointed a special officer to uproot the Gold-Silver-idols studded with pearls and diamonds. Wealth was the primary motive here. Richard Eaton, the prominent scholar tells that many Hindu kings broke the idols of Kuldevtas of their rival kings. And even Aurangzeb was instrumental in destroying a mosque in Golconda when the local King Tanashah refused to pay tribute for many years.

All this is well documented in various historical documents. British to intensify their policy of ‘divide and rule’ selectively projected part of the picture to lay to foundations of Hatred between Hindus and Muslims. Today resorting to logic and facts of the past are looked down upon as taking off from the communal historiography the communal organization through their shkahs-schools-media network has ensured that Muslim kings are demonized on the issue of temple destructions.

Coming to Richard Eaton his immaculate scholarship shows that Audrey Truschkey’s book, Aurangzeb, which overcomes the communal biases points out, “Of tends and thousands of Hindu and Jain temples Located within Mughal domain, Most though not all, still stood, at the end of Aurangzeb’s reign.” Richard Eaton’s estimate is that during Aurangzeb’s reign nearly 1-12 temples might have been desecrated on royal orders. Truschke further points out, “Political events incited Aurangzeb to initiate assaults on Hindu temples. For example Aurangzeb ordered demolition of Kashi Vishwanath temple (1669) and Mathura Keshav Dev Temple in 1670. In both instances Aurangzeb sought to punish political missteps by temple associates and ensure future submission to Mughal state.”

She points out “ In 1670 he directed the obliteration of Krishna Dev Temple built in Mathura in 1618 by Bir Singh Bundela…for political reasons…Mathura’s Brahmins may have assisted 1666 escape of Shivaji from Agra.” Interestingly same temple was patronized by Dara Shikoh.

The scientific study of events of history does tell us that Kings were primarily ruling for power and wealth. The Communal historiography introduced by British; associated Kings primarily with their religion. And by this shrewd move the actions of Muslim kings were made to reflect upon the Muslims of the present. The deep propagation of these has led to the presently dominating social common sense, which associates temple destructions and conversions to Islam; to Muslim kings. With this there is long list of factors to demonize today’s Muslims. This demonization and hate is the ground on which communal violence-polarization stands and acts as a brake on the social amity.

Krishna Janmabhumi and Idgah abutting each other should be taken as a positive aspect of our culture. So far Hindus and Muslims of the area have been living with each other and greeting each other on each other’s festival. The present situation is a bit close to Mumbai’s traffic island. This one is in the central location in Mumbai, in Dadar. In the same island, touching each other are a temple and a mosque and a Church! Even in the worst phase of Mumbai violence of 1992-93, no one touched it. The followers of different religions look at it with great amount of reverence and love. Can we think of an India where such prevailing islands of amity are respected and upheld rather than erased on one or the other pretext?

Stop False Arrest Of Adivasis And Threats To Rights’ Activists And Lawyers In Chattisgarh
"Intellectuals Have A Duty To Expose Lies Of State": Supreme Court Judge
Debolina starts hunger strike in jail
Karnataka -After Accusations Of Sedition, Ramya Targeted With Eggs #IntolerantIndia