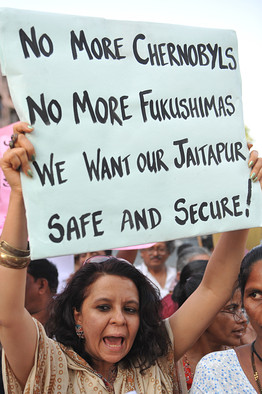 When India‘s Prime Minister Manmohan Singh arrived in the U.S. last week, he reportedlycarried a generous gift: an unlimited number of free lives. To be precise, Singh was ready to promise President Obama that should any of the nuclear reactors that India is planning to buy from U.S. companies ever suffer an accident, they will not have to pay anything in damages. Whether or not he made this offer is unclear — but the meeting evidently went well. Afterward the two leaders announced a deal between Westinghouse and India’s nuclear operator for building six reactors in Mithi Virdi, Gujarat.

The White House has long demanded such a pledge, and more: that it be written into India’s body of law. In 2008, Singh and President George Bush had finalized a deal enabling India to import reactors and uranium fuel without signing the Non-Proliferation Treaty. “The people of India deeply love you,” a grateful prime minister had gushed to Bush. Indians soon discovered, however, that earning a superpower’s affection takes deep pockets: in lieu of US support Singh had secretly promised to buy at least 10,000 megawatts of nuclear power from Westinghouse and General Electric, at an ballpark cost of about $40 billion. The deal also implied that India would ratify the Convention on Supplementary Compensation for Nuclear Damage.

Pioneered by the U.S., this agreement requires countries purchasing nuclear power plants to pass domestic legislation, both to indemnify the suppliers from all costs of accidents and also to deny citizens the right to sue for compensation. “The concern is that if there is an accident the compensation could be so huge that the companies would be bankrupt,” explains M.V. Ramana of Princeton University’s Program on Science and Global Security. Chernobyl has cost well above, and Fukushima may cost as much as, $250 billion — virtually all of which expense is being borne by victims and taxpayers in the affected countries. The convention ensures that this model of compensation will remain the norm.

Thus far, the agreement has been ratified by Argentina, Morocco, Romania and the United States–which, however, has exempted itself from key provisions. The relevant U.S. law is instead the Price-Anderson Act of 1957, which channels liability to the operators of a plant and currently caps it at about $12 billion; it does not curtail Americans’ right to sue. One more country with some installed nuclear capacity has to ratify the convention before it comes into force.

Try as he might, however, Singh could not get India’s raucous democracy to fall in line. To begin with, the nuclear deal precipitated a no-confidence vote that he barely scraped through. In a cable later revealed by Wikileaks, an employee of the U.S. embassy in New Delhi reported that five days before the vote a member of Singh’s Congress party showed him two chests full of cash, and told him they were part of a $10 million cache being used to purchase the support of ministers of parliament. Evidently the U.S. needed reassurance that Singh was doing all he could to push the deal through.

The nuclear liability bill proved just as contentious — not least because memories of the Bhopal gas disaster of 1984 surfaced even as it was being discussed. Union Carbide had paid a mere $470 million for what is now estimated to be more than 15,000 deaths and 100,000 injuries, and many Indians were adamant that no other company would walk away from such devastation. The Nuclear Liability Act of 2010, allegedly also passed by dubious means, nonetheless removes Indians’ ability to sue for compensation and channels liabilities to the local operators, capping them at 15 billion rupees (currently about $240 million).

Not all went according to plan, however. The law also specifies that if a reactor defect causes an accident, the operator can claim from the supplier whatever it pays out. Despite the cap of $240 million — a small fraction of the price of a reactor and a thousand times less than the potential cost of an accident — the U.S. strongly disapproved. So in writing the regulations for the bill, Singh’s team decreed that the operator can claim only for accidents occurring within the initial licensing period for a reactor, which is normally five years. A reactor has a lifespan of four to six decades.

Even that was not enough. “The nuclear industry doesn’t like this business of being liable for anything at all,” Ramana observes. Accordingly, Singh is believed to have pledged last Friday that India’s government-owned nuclear operator, which will be running the Westinghouse and GE plants, would waive all claims. Given the current form of its law, however, India cannot ratify the convention.

Nuclear suppliers are worried: even a tiny crack in their defensive wall could expand in the future, letting in a flood of claims. Under Japan’s nuclear law, for instance, GE bears no liability for the ongoing catastrophe in Fukushima, although it designed all six of the damaged reactors and supplied three of them. Experts had long criticized the weak containment dome of these reactors, three of which gave way. The Fukushima fallout includes a Greenpeace demand for revising similar liability laws around the world, such as in Canada.

Meanwhile, the fierce determination of not only the U.S., but also France and Russia to evade liability for their nuclear suppliers (India is buying reactors from all three countries as payoff for entry into the nuclear club) has convinced many Indians that the plants must be unsafe. The suspicion is well founded. For instance, if a severe accident indeed occurs as infrequently as once in four million years, as Westinghouse claims, the insurance to cover a reactor for a lifetime of operation in India would cost less than $3,500 — rendering moot all the arm-twisting to extract a pass on liability. According to Thomas Cochran, a former senior scientist at the Natural Resources Defense Council, the extant record of nuclear power shows the chance of an accident to be a thousand times higher than commonly claimed.

On the eve of Singh’s departure for the U.S., thousands of people from Mithi Virdidemonstrated against the proposed Westinghouse reactors. Mithi Virdi, which means Sweet Water, is the name of a lake that farmers depend on, and whose water the plant will use and pollute in its routine operations. Building it there will require further abrogation of democracy — but Singh has had some practice. In Koodankulam, at the southern tip of India, the police have suppressed a prolonged and spirited campaign against new Russian reactors by turning away journalists, deporting foreign sympathizers, desecrating a church, placing three villages under virtual siege and slapping sedition cases (which can carry sentences of life imprisonment) on close to seven thousand protestors, including children.

Around the world, and especially in countries where the public has a say on policy, nuclear power plants are shutting down because of concerns over cost and risk. Companies that clearly don’t trust their own claims of safety have long been asking ordinary people to stake their lives on the same — and they are no longer willing to comply. In the post-Fukushima era, nuclear power may well turn out to be incompatible with meaningful democracy.