Nearly every section that constitutes the socio-political economy of Sikar district has turned up to lend support to the farmers‘ protest, be it students, anganwadi workers, the city bus union, the autorickshaw union, the small traders association or the pump set workers.

Sikar: Something unusual is happening in Sikar. For the past 10 days, an agitation is being held at the farmer mandi of the district headquarters here. But what is different this time is the scale of the protest, and who all are turning up for the demonstration.

Nearly every section that constitutes the socio-political economy of Sikar district has turned up to lend support to what had started as a farmer protest, be it students, anganwadi workers, the city bus union, the autorickshaw union, the small traders association, the pump set workers… you name it.

On Saturday, even the local DJs in Sikar dropped in. Forty SUVs, each one loaded with a high-end sound system blasting away at full volume, arrived in an ear splitting procession. On any given day, nearly 10-20,000 people, and on at least two occasions, close to 1.5 lakh people marched in solidarity with the farmers.

So just what is going on in this northern corner of Rajasthan?

The Agricultural Produce Marketing Committee Mandi in Sikar town has become the ground zero for agitating peasants. Thousands of farmers have arrived to air their grievances.

They have all rallied around Amra Ram, a veteran CPI(M) leader from Sikar and a four-time MLA. The Mandi is festooned with red flags and many of the vehicles carry the hammer and sickle banner.

IN FOR THE LONG HAUL

The farmers have been here seen September 1, herding a call given by the All India Kisan Sabha, the CPI(M)’s peasant organization. On Monday, September 11, a gigantic crush of humanity will descend on Sikar and gherao government offices. There have been hints and whispers of violence and police action against the farmers.

The protesters are unlikely to move out soon, and have made all the arrangements to keep the fire of the stir burning. To sustain themselves, the farmers have divided themselves into groups of 20-25 peasants. The groups went around in their respective villages collecting cash and grain. They have used the cash to pay for utensils, gas cylinders, stoves, mattresses, daris and other things for a long agitation.

It’s a real sight to see the different farmers groups camped out in an agricultural shed the length of three football fields. Each group cooks its own dinner with the grain they brought from their villages and vegetables purchased cheaply from the Mandi nearby or offered free of cost by sympathetic traders. The men play cards or read newspapers to kill the time or engage in discussions about what ails farmers.

“It is the biggest gathering I have seen in Sikar for at least 30 years,” says Ashfaque Qayyam Khan, a long-time resident of Sikar and a case of the original Janata Dal, who’s seen his share of political rallies. “What is happening is unprecedented,” he said.

It is a little surprising to see even the traders’ association turn up at a farmers’ agitation. According to textbook Marxism, the class interests of peasants and traders are radically opposed. The peasants in Sikar have had a long association with the CPI(M) while the small traders are the bedrock of the BJP.

What is happening here points to a shift. It is a fact that the scale of trade has been tilting against farmers in recent years. This trend has gained momentum especially in the last year, aided in part by government policies, say the protesters. At the same time, there is a perception that the levers of trade and the economy have slipped out of the small and medium traders into the hands of large corporations. 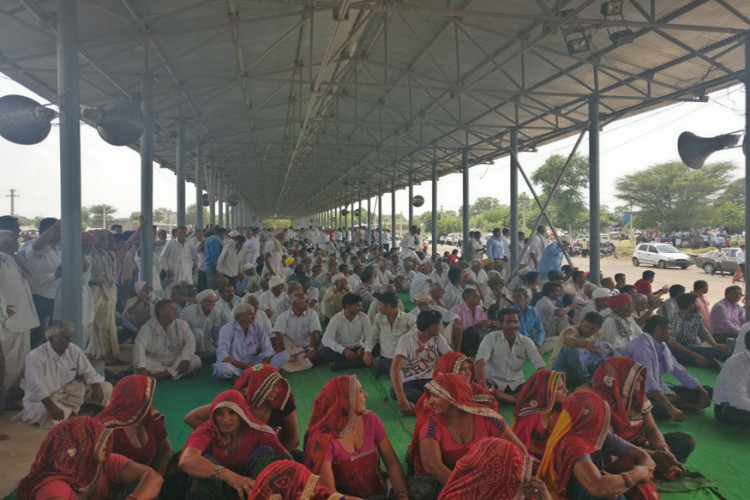 The farmers are camped in an agricultural shed the length of three football fields. (Photo: News18)

In other words, both farmers and traders feel immiserated by the policies being pursued by the government and feel that economic power has slipped out of their hands.

Over the last year, the prices of agricultural commodities have all but collapsed. What farmers get for their produce is well below their cost of production, leaving them no option but to borrow from banks or money lenders. The failure to get remunerative prices for wheat, vegetables, milk and other agricultural commodities merely perpetuates the vicious cycle of debt.

When farmers’ income collapses, the sections that have close economic ties to them also suffer. The agricultural sector in India employs nearly 60% of the population. In an agricultural district like Sikar, this number would be higher. Simply put, everyone here is connected to a farming family… even the local DJ.

The pump set trader, who sells electrical equipment to farmers, sees his income suffer because the farmer cannot purchase from him. The shopkeeper who sells seeds and fertilizer sees his sales coming down because the purchasing power of the farmer has declined. Even the local DJ, who carts his mobile sound truck on demand, does not make as much money because the neighbouring village which in the past used to call and pay him can no longer afford his services.

In a sense, the collapse of the purchasing power of 70% of the population has a direct bearing on the remaining 30%. What is happening in Sikar is the social eruption of an agricultural collapse.

Take the example of onions. Puran Singh Sekhawat spent Rs 9,000 per bigha growing them. This hardy farmer from Palthana village near Sikar got Rs 3,000 per bigha for his crop. A loss of 6,000. While the farmers here get Rs 3 per kg for their onions at the local mandi, consumers have pay Rs 30 per kg.

Neither is the farmer getting a fair price nor is the consumer getting a low price. “Who is skimming off the money?” is a question that these peasants are asking? And this is one of the main reasons they have gathered here in protest.

The peasants want the recommendation of the Swaminathan Committee implemented. They want the government to cover their cost of production and give them a profit of 50% over and above that, as Narendra Modi promised while campaigning in 2014.

The farmers say that agricultural inputs have got more costly, while the prices of the output have been depressed. Seeds, fertilizers, pesticides, pumpsets, motors and labour wages have increased while the price realized by farmers on grain, vegetables and milk has either stayed the same or decreased.

“One litre of bottled water costs 20 rupees, the same price as I get for a litre of milk. How can milk be cheaper than water?” asks Hasan Khan, a marginal farmer who has been here since the beginning of September.

The perception among farmers and traders is that the Goods and Services Tax has made agricultural inputs more expensive. The grievance among both sections is that the government has taxed inputs at the highest rate of 28%.

At the same time, the wages of non-farming sections have failed to keep pace with inflation. Krishna Sharma, the secretary of the Anganwadi union said that most workers earn around 3,000-5,000 rupees per month. This is below Rajasthan’s minimum wage.

A study by renowned economists Thomas Pikkety and Lucas Chancel indicates that income inequality in India is at its highest level in 90 years. At the same time economic growth has been coming down, declining to a 3-year low of 5.7% last quarter.

This is at the heart of why the agitation has gained fresh momentum in Rajasthan. 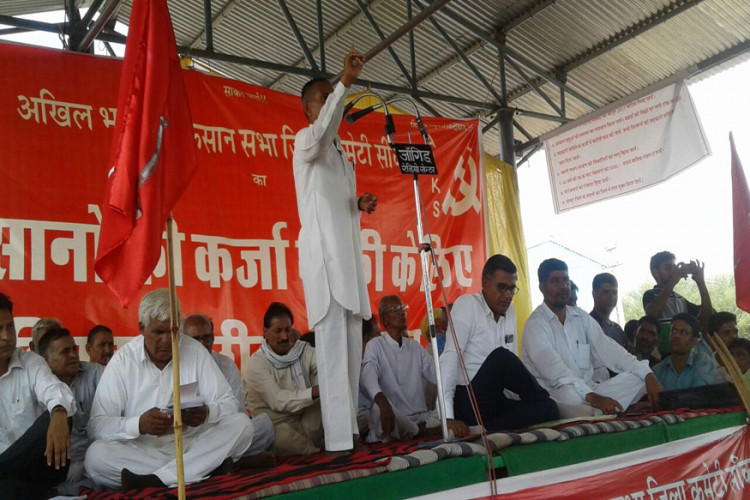 The protesters have rallied around Amra Ram, a veteran CPI(M) leader from Sikar and a four-time MLA. (Photo: News18)

Government policies also cannot escape blame. Food items constitute nearly 50% of the consumer price index, the benchmark inflation gauge that is targeted by the RBI. With the RBI’s mandate having changed to purely inflation targeting, depressing food prices has been woven into government policy.

Government statistics show that India has entered a low inflation phase. Economists are debating whether the change is structural or seasonal. When I put this to Prakash, he snorted.

The marginal farmer with 2 bighas of land has a debt of Rs 6 lakh. Meeting daily expenses is a struggle for him. “If inflation is so low, how come I pay Rs 40 for onions?” he demanded to know.

To be sure, many here have branched out into other occupations. Their sons and daughters are not interested in tilling the fields and many have joined government services. Men here join the army or police while women become teachers and anganwadi workers. The income from government service is a welcome supplement to farm incomes.

But it is also a source of resentment. “The government employees get pay revisions and are quite well off. What do we get?” asked one villager.

There is another government policy, which has hit farmers’ income.

The obsession to save the cow has a direct bearing on the well-being of farmers. The government’s law making it harder to sell cattle and the fear of the gau rakshaks means that farmers cannot monetize unproductive cattle, among the few assets they possess.

Thousands of cattle now roam the villages, eating crops and destroying agricultural land, putting an additional burden on farmers. “Now I have to spend money to fence off my land and one member of my family has to stay awake in the fields all night to ward off the cattle,” Rameshwar, a farmer from nearby Rasheedpura village, said.

Can the farmers’ agitation spread? It is difficult to say. The CPI(M) does not have a hold in any other part of Rajasthan. Plus, many of the farmers are here because of the goodwill that Amra Ram enjoys in the district.

However, it is also undeniable that this is mainly a Jat led agitation. Farming is the main occupation of Jats in Rajasthan. Although the rhetoric at a communist peasant gathering is politically correct, there is a caste underpinning to it.

Hari Ram, a large Jat farmer with 130 bighas of land irrigated by 4 tubewells from Palthana village, blames NREGA for raising labour costs and wants the scheme to be abolished. This is not an uncommon sentiment among the land owning classes and big farmers. But Hari Ram’s party is fully supportive of NREGA.

In 15 days, the crop cutting season will start and the farmers will have to disperse. Whether the agitation can be sustained after that remains to be seen.

In early 2019, Rajasthan will go to the polls and which way the political wind blows will be an indication for the general election later that year. In a way, the agitation in Sikar is an early bugle call that the game of politicking in India’s largest state is underway. Which way it goes is anybody’s guess. But it is clear that the government has to address the questions raised here on an urgent basis.