Is there a larger design behind Yogi Adityanath’s ‘choti diwali’ celebrations in Ayodhya?

The Babri Masjid-Ram Janmabhoomi dispute must stay in the news.

Uttar Pradesh chief minister Yogi Adityanath is busy creating history of sorts in Ayodhya, where Diwali was celebrated a day earlier. “Choti Diwali”, as the day is commonly referred to, witnessed a historic festival of lights in the ancient temple town that has remained in the news over the recent decades for all the wrong reasons — especially for the tensions over the long pending Ram Janmabhoomi-Babri Masjid dispute.

Yogi Adityanath decided to mark the occasion with the portrayal of the legendary Lord Ram arriving in his kingdom Ayodhya after a 14-year-exile following the defeat of demon king Ravana and the devastation of his Lanka. He even arranged for a helicopter to be flown down for Ramlila artists playing Ram-Sita and Lakshman. “The idea is to show to the people how Shree Ram Chandra ji took the ‘pushpak viman’ to return to Ayodhya which is lit up like never before,” said a spokesman of the UP government.

Yes, it was an official show, obviously to impress upon the public how dedicated the saffron-clad UP chief minister is to the cause of Ram. So what if the highly controversial Ram temple cannot be built without a judicial verdict? The whole idea is to show that Adityanath is leaving no stone unturned to pay obeisance to one of the most revered Hindu gods in his birthplace. To demonstrate his devotion to Lord Ram, the chief minister also proposes to have a 100-metre tall statue of the god erected on the banks of the Saryu river. 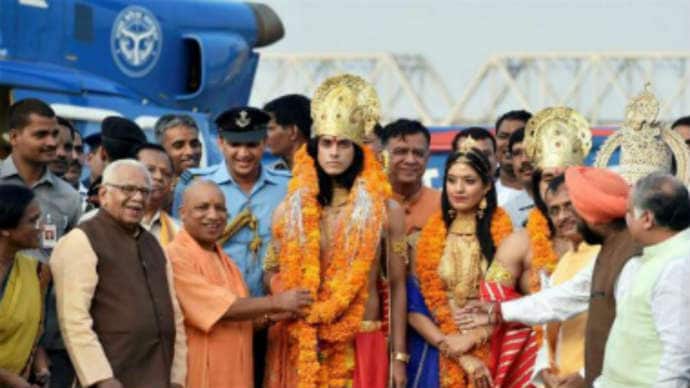 Sure enough, Adityanath has managed to very discreetly play to the sentiments of the people without raising the usual fervour associated with this city, known for ages as the birthplace of Ram. Understanding the pulse of the people, he devised a really subtle means to bring Ayodhya back to centre stage. What had become visible during the much hyped Ayodhya movement in the ’80s and early ’90s, leading to December 6, 1992, when the Babri Masjid was pulled down, was largely on account of Hindu activists converging at the temple town from different corners of the country.

And each time an attempt was made to revive the temple issue, it was fraught with much tension, and would end up disrupting the normal lives of locals.

Each build-up in the name of the temple would bring misery to the locals who began to despise everyone who sought to rake up the issue. “Leave us alone” was the outcry of most people who were often heard asking, “Why cant these politicians let us live in peace? Left to the local people we can resolve this issue between the two communities,” many would say.

The grand celebrations on “Choti Diwali” on Wednesday was one of those rare occasions when locals looked cheerful and were actively participating in the event right from the morning. For a change, the city — laden with filth and squalor through most of the year like any other UP town — was all spruced up for the mega event. The morning began with a heritage walk with local sadhus. And quite discreetly, they kept a safe distance from the contentious Ramjanmbhoomi-Babri Masjid site, where the makeshift Ram Temple — erected hastily after violent Hindu karsevaks stormed the 16th century mosque and demolished it — continues to attract a large number of Hindus every day.

The real celebrations began with the arrival of “pushpak viman” (helicopter), carrying the symbolic Ram-Sita-Laxman trio. The chief minister seemed to be playing the symbolic Bharat, by receiving them at the helipad. UP governor Ram Naik and Adityanath’s entire cabinet followed the CM, perhaps to symbolise the “Treta yug” elite, who welcomed Ram on his arrival in that era.

With that began the unprecedented celebrations all along the beautifully decorated and brightly illuminated “Ram ki Pairi” and the Saryu ghats, where a laser show provided a breathtaking spectacle for the local masses who could have never imagined witnessing anything like it. The chief minister’s arrival was marked with the lighting of some 1,80,000 “diyas” — a feat that a team of Guinness World Records was also invited to witness. Adityanath also took the opportunity to announce Rs 133 crore-worth projects for the development of a “neglected” Ayodhya.

The deftness with which the UP CM carried out his obvious agenda must be admired. No matter how much he is targeted for lapses in governance, he knows questioning him for celebrating Diwali in Ayodhya could prove counter-productive for the Opposition.

But what he apparently failed to explain is why he chose to celebrate the festival of lights on “choti Diwali”, which has neither mythological nor historical significance. Apparently, Yogi found it more convenient to put up the mega show a day earlier because he could not afford to be away on the auspicious Diwali day from his first love — the Gorakhnath temple. So you know, when it comes to choosing between Ayodhya and Gorakhpur, he prefers the latter. That sheds some light on his actual passion for Ram.

Yogi Adityanath has undoubtedly played his cards well. The entire BJP-RSS combine has gone to town vehemently denying any political undertones in the mega event, which, according to them, was only a reflection of their devotion to Ram. But then shouldn’t they tell us what stopped them from celebrating Diwali in Ayodhya in all these years — both during different stints of the BJP rule as well as during other regimes? BJP stalwart Kalyan Singh, widely alleged as the architect of the Babri demolition ruled UP twice, while Rajnath Singh (the present Union home minister) too did two tenures as chief minister, in addition to a brief stint by Ram Prakash Gupta.

But would anyone have stopped them if they had given a call to celebrate Diwali even without being in power? Surely, the party could have easily mobilised popular support and funds for such a celebration. That would have demonstrated their true passion for Lord Ram and his legacy. Who would believe that any political party — and much less the BJP — requires state funding for any celebration?

It is another matter that not many would want to spend from their own pockets – even in the name of the most revered Ram.

The fact that the Ayodhya Diwali celebrations shot to focus out of the blue naturally rouses suspicion about a hidden agenda. There are two key reasons for it: building a people’s narrative around Ayodhya well before the decades-long dispute is taken up for day-to-day hearing by the country’s apex court, starting December 5 — precisely 24 hours before the 25th anniversary of the demolition of Babri Masjid — and piggybacking on the temple card to ensure the much desired polarisation of votes in 2019, when the nation goes to the polls.