Doubts grow over UN report, seemingly reliant on year-old document from Syria thought to have been doctored 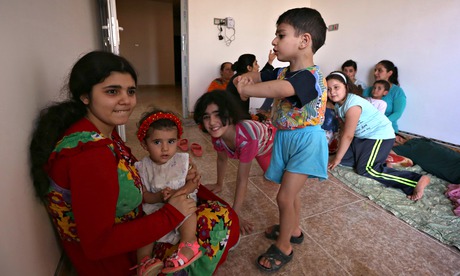 An Iraqi Christian family in the village of Qaraqush after fleeing Mosul. Photograph: Safin Hamed/AFP/Getty Images

Jihadi extremists who have taken over the Iraqi city of Mosul have deniedordering families to have their daughters undergo female genital mutilation in order to prevent “immorality” or face severe punishment, as claimed by a senior UN humanitarian official on Thursday.

Supporters of the Islamic State (Isis), previously known as the Islamic State in Iraq and the Levant, dismissed the story as propaganda based on a fake document – though residents of Mosul, as well as Kurdish officials, insisted it was true.

The claim about enforced FGM came from the UN’s deputy humanitarian coordinator in Iraq, Jacqueline Badcock, who told reporters that up to 4 million women and girls aged 11-46 faced the risk of genital mutilation. “This is something very new for Iraq, particularly in this area, and is of grave concern and does need to be addressed,” she said. “This is a fatwa from Isis. This is not the will of Iraqi people, or the women of Iraq in these vulnerable areas covered by the terrorists.”

Reports about the issue have been circulating in Iraqi media for the past few days. On Wednesday a Kurdish website, BasNews, reported that the fatwa had been issued by the self-proclaimed “Caliph” of the Islamic State, Abu Bakr al-Baghdadi, as a “gift” to the people of Mosul. BasNews said on Thursday that it stood by its story. “Of course Isis would deny this,” the editor, Hawar Abdulrazaq, told the Guardian.

Badcock’s comments came in a briefing by videolink from her base in Irbil, capital of the Kurdish regional government, to reporters at the UN headquarters in Geneva.

But plans for a statement by the UK international development secretary, Justine Greening, were dropped as doubts grew about the accuracy of the claim.

Suspicions about its veracity were based partly on the fact that FGM is not required by Islam and is not prevalent in Iraq. It is most widespread in Egypt, Sudan and east Africa.

A document circulating on social media purporting to be the Isis fatwa was in fact dated July 2013, originated in Aleppo, Syria, and was widely described as having being photoshopped. It appeared on Thursday on the website of the Saudi-owned TV channel al-Arabiya.

Ahmed Obaydi, a spokesman for Mosul police, told BasNews: “Baghdadi’s decision to have all women circumcised is, as he claims, to prevent immorality and promote Islamic attitudes among Muslims. The decision was made by Baghdadi as a ‘gift’ for people in Mosul.” But Mohammed, a local journalist, told the Guardian he knew no one who had been told by Isis that their female relatives should undergo FGM. “This is mainly media hype with no substance,” he said.

Isis supporters quickly dismissed the story as a hoax. “If Isis responds to every lie and rumour they will not be able to control all these areas you hear about,” tweeted one. “Please ask UN to prove their claims before you hear from us.” The same Twitter account, whose name is derived from an Arabic word meaning “monster”, contains multiple images of the decapitated heads of Syrian soldiers taken in the Raqqa areas near the Iraqi border.

According to the Iraqi paper al-Mustaqbal, which also reported on the alleged fatwa earlier this week, the practice of FGM is alien to Iraqi society except the Kurdish provinces. Worldwide, more than 130 million girls and women have undergone FGM.

The FGM story broke against a background of wider concern about the situation in Mosul, whose Christian community has been forced to fleeunder threat of forced conversion or execution by jihadists who have turned churches into mosques and confiscated property.