It is Now Official, BJP Ruled States Outdo Others in Crime against Dalits 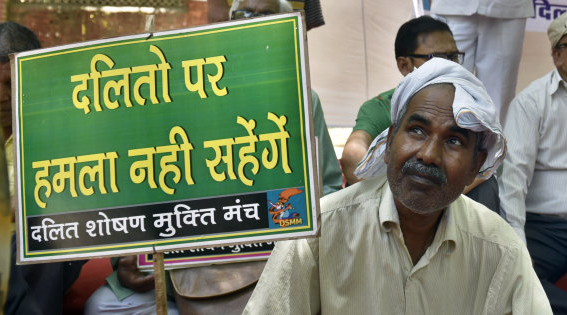 Number of crimes against Dalits have gone up substantially

It has again come up prominently in the National Crime Records Bureau (NCRB) “Crime in India-2016” Report that BJP ruled States outdo other states in atrocities against Dalits (Scheduled Castes). As in 2015.

At present the BJP rules Gujarat, Rajasthan, Maharashtra, Madhya Pradesh, Haryana, Chhattisgarh, Goa and Jharkhand where Dalit atrocities cases are more than the non-BJP ruled states. In other states ruled by regional parties and the BJP— Orissa, Andhra Pradesh, Telangana, Uttar Pradesh and Bihar—the atrocities against Dalits are higher than the National Rate (Crime per one lac population).

Total Crime against Dalits during 2016

Similarly during 2016 the total of crime against Scheduled Tribes (Tribals) was 6,568 which was 4.7% more than the crime figures of 2015. There were 974 Rape cases on Tribal women which is 14.8% of total crime committed against Tribal women. The cases relating to outraging the modesty of Tribal women were 835 which was 12.7% of total crime. Thus it becomes clear that Dalit/Tribal women are not safe under BJP rule.

2. Attempt to Murder: During the above period the total incidence of this crime in the whole country was 732 and the rate per lac was 0.4. In this crime Rajasthan with 106 and Gujarat with 35 cases with crime rate of 0.9 which is just double of National rate stood first. Maharashtra with crime figure of 60 which affected 71 persons and crime rate of 0.5 is higher than the national rate. It makes it very clear that Dalits are not safe in BJP ruled states.

4. Crime of Attempt to Outrage the modesty of Dalit Women: During this period the total number of cases under this category was 3,172 and the national rate was 1.6. Under this head the rate of incidence of crime in Madhya Pradesh was 6.0, 3.6 in Andhra Pradesh, 2.7 in Maharashtra, 2.0 in Haryana and 0.6 in Gujrat showing that this rate is higher than the national rate.

5. Crime of outraging the modesty of Dalit women: Under this head the total incidence of crime in the country was 1,268 and the national average was 0.6. The rate of this crime in Madhya Pradesh was 3.6, 1.1 in Chhattisgarh, and 1.3 in Maharashtra, 0.8 in Rajasthan, 0.7 Haryana and 0.6 in Gujrat which is higher than the national average.

6. Rape: Under this head total number of cases of Rape of Dalit women was 2,536 in which 2,540 Dalit women were victims and the national average was 1.3. The rate of incidence of this crime was 4.7 in Kerala, 3.9 in Madhya Pradesh, 2.9 in Chhattisgarh, 2.7 in Rajasthan, 1.9 in Haryana and 1.7 in Maharashtra which is much higher than the national rate. In fact rape is used as a weapon to demoralise the Dalits.

From the above analysis it is clear that most of the BJP ruled states are ahead of non-BJP ruled states in crime against Dalits and Tribals. These statistics show that Modi’s slogan “Sabka Saath, Sabka Vikas” stands exposed. The recent incident of attack on Dalits in Koregaon also exposes the hypocrisy of BJP.

(S.R.Darapuri is retired from the Indian Police Service)