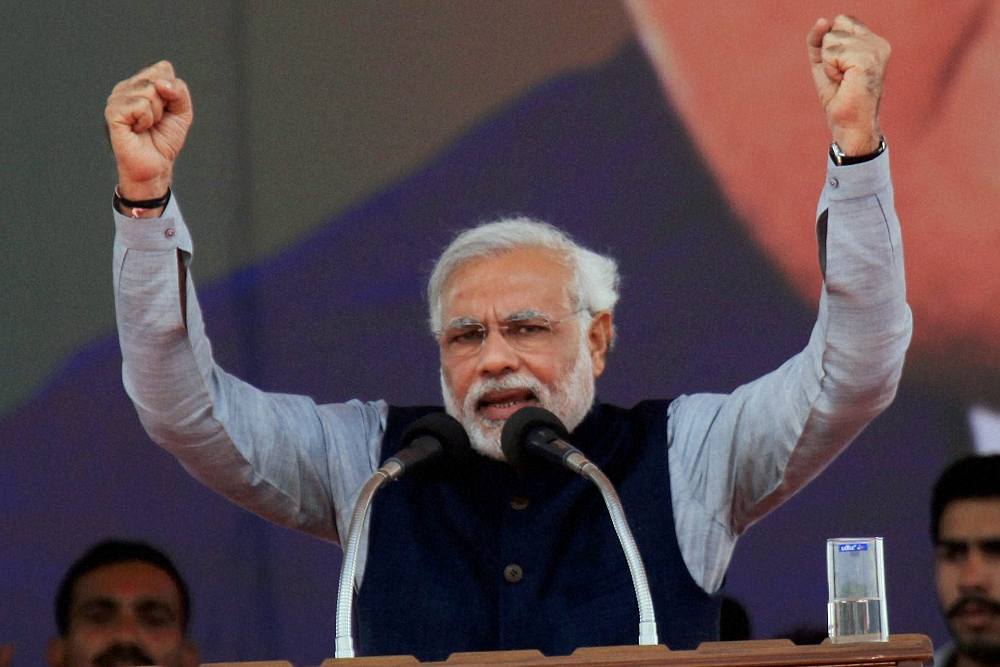 A recent report (‘NITA is the new TINA’) on the electoral strategy of the BJP in Outlook quotes a RSS functionary: ‘You can call it a Hindutva versus votebank politics campaign…and if it works, we are sure the people will vote for Hindutva, and therefore the BJP’. This report brings out an important new equation: if only you are against vote bank politics, then you should already be inching towards Hindutva, and likely voting for Modi. A game-changing equation is being suggested here: that even those who do not explicitly endorse majoritarian Hindu sentiments will vote for Hindutva—all thanks to the new agenda of opposing vote bank politics, fighting corruption, what goes around in the name of say good governance.

The RSS attempt here is to mobilise the entire groundswell of bottom up consciousness for good governance in favour of Hindutva. Good governance as a stand-in for Hindutva. If good governance votes are being eyed upon, what about secular votes—will these too be targeted by BJP poll strategists?

Here we can do well to recall Praveen Togadia’s tweet that Hindutva followers should not be too opposed to Modi ordering the arrest of Bajrang Dal activists (they were arrested on August 20th, 2013, by Gujarat Police after they had vandalized an art exhibition in Ahmedabad which included art exhibits from Pakistani artists). The reason Togadia provided: ‘Let him add secular votes’.

It is in this context that one must understand Rajnath Singh’s claim that BJP’s secularism is based on insaaf and insaniyat, and not on votebank politics.

The RSS functionary’s views assumes a particular understanding of the Indian voter for whom fighting vote bank politics and pitching for good governance becomes more important than fighting the dangers of Hindutva politics. This points to one emerging affinity in Indian politics today: that the wider agenda of good governance and anti-corruption is compatible with Hindutva, that, for example, fighting corruption is in sync with supporting Modi’s Hindutva. The mainstream fight against corruption today might deliver itself at the feet of Modi’s Hindutva.

How is this possible? How is it possible that Hindutva’s communal polarisation often leading to communal riots and breakdown of the rule of law becomes compatible with good governance? We get some answers through a close reading of the recent riots in Muzaffarnagar (Sep 2013) and in fact its (non-) resonance in wider Indian politics.

Muzaffarnagar pointed towards a new kind of riots. The strategy there seems to follow from the ‘lessons learned’ from what ‘went wrong’ in Gujarat 2002, where the high number of Muslims killed (790) attracted enormous press and civil society attention around the world, and created a political albatross that dogs Modi to this day. Hence keep the number of actual killings low and instead compensate for that by increasing those displaced and uprooted from their land and homes—clearly the pattern in Muzaffarnagar riots, where the thrust was on displacing Muslims (50,000), shattering their economic base and means of livelihood, rather than on killings per se (‘only’ 37 Muslims killed).

The trick: keep communal polarisation low profile or low intensity and keep chanting the mantra of development and governance!

One immediate indication of this is the Modi campaign which has Modi focusing on good governance [1], development and growth even as other BJP leaders go on promoting communal politics. Thus, while Modi wants to sound like a good governance expert or a management guru, ‘moderating his rhetoric’, the other BJP other leaders in the Parivar can carry on the traditional communal bluster, fomenting riots and so on.

For example, in the much talked about BJP rally in Agra on Nov 21, 2013, MLAs Sangeet Som and Suresh Rana, the accused in Muzaffarnagar riots, are felicitated as brave sons. Modi too speaks in the meeting and keeps his affinity with communal politics alive but without getting directly implicated. Says a report:

‘Modi’s absence at the moment of felicitation is significant. Modi being the astute politician that he is knows well that if Som and Rana were to be proved guilty by the law courts in future, he would be able to successfully distance himself from the act of felicitating them. And by allowing some party members to congratulate Som and Rana, he will not stem the flow of the party’s sentiment, without directly contributing to it. That’s an ace move one has to say!’

At a deeper level, what is happening is that riots are getting ghettoised. Earlier, minorities were ghettoised in the cesspool of socio-economic backwardness but their killings in riots as in say Gujarat 2002 would shock the nation and make for national debate. No more. With Muzaffarnagar, we know that now riots too can be ghettoised. As someone asks, why has the Muzaffarnagar failed to prick the national conscience?

When the country was in tumult over the rape of women, you had scores of women raped during the Muzaffarnagar riots. So little is heard about these ‘Nirbhayas of Muzaffarnagar’ even as the country is supposedly in the throes of a movement for swaraj, and some say, ‘second freedom movement’.

Thus the riots in Muzaffarnagar do not become an issue at all in the Delhi elections (Dec 2013). These elections gave full voice to the agenda of development and good governance. Indeed, how can the good and clean governance of citizen-entrepreneurs have anything to do with sectarian violence and minority persecution?

The much touted rejection of vote-bank politics and vested interests, or even the fight against corruption now feels like an alibi and a refusal to not address the issue of minority persecution, indeed, of mass murder and rape which was unfolding not very far from Delhi—nay, not just refusal, but a total invisibilisation, pushing the riots outside the field of vision. Out of sight, out of mind.

As good governance and development issues become hegemonic and the mainstay of the public discourse, riots and communal polarisation do not necessarily end or even decrease. Instead they fester now in the ‘underground’, without becoming an election issue or embarrassing those in power about their (tall) claims of democracy, minority rights and rule of law. Think of how much the Gujarat riots grabbed headlines and compare it with the meagre coverage of the Muzaffarnagar riots.

Minority persecution is shoved into the arena of some kind of a naturalistic inevitability or merely a carryover from the practice of vote bank politics and corrupt vested interests [2]. We good citizens, innocent of those horrible machinations, and fighting corruption day in and day out, and now all standing for good governance will obviously not have anything to do with it! Go ask somebody else about it!

Riots and communal polarisation now stand in a particularly salubrious relationship with the hegemonic agenda of good governance and development issues. Indeed, the mantra of development and good governance has made it so much easier to cleanse your hands off the most heinous crimes of communal hatred and murder.

Modi is the exemplar of this mix of riots and good governance today.

But it is not that this mix of riots and good governance cannot exist without Modi. As a modality, ‘Modi’ can be pulled off by some other force too. The Samajwadi Party which presided over the Muzaffarnagar riots has in a way already done a Modi, perhaps not with as much of perfection. Congress too is not to be left behind if only we recall, say, the anti-Sikh riots of 1984.

Thus it does not make sense to attack Modi for 2002 without critiquing the new agenda and the new modality. The real Modi must be attacked and dragged to court and so on—but we must also reflect on ‘Modi’, the name for a particular modality of Hindutva and good governance. Unfortunately the agenda of good governance is uncritically shared by those who are fighting Modi and the BJP, those fighting ‘communalism’, by the Aam Aadmi Party and to a large extent by the Congress, including many other regional political parties. This agenda seems to have become the default modality, the hegemonic stance in Indian politics today.

Now many, among them ardent secularists and leftists, welcome this new agenda of politics while opposing Modi/BJP. They think of good governance as rightly taking us away from divisive issues and communal or vote bank politics and open the way towards a more enlightened, rational politics based on genuine issues of development and governance. A Muslim as much as a Dalit or an upper caste Hindu or a jhuggi dweller all want basic amenities like water, electricity, good schools—they all want good governance, don’t they?

So if only we could stop Modi or the BJP from coming to power, this agenda is in itself very positive! It is by dint of this logic that scores of secularist or left-leaning activists and academics have joined AAP which in many ways is spearheading the good governance crusade. And yet in terms of its articulation, effects and ramifications, the new agenda seems already set in its affinity with communal politics. This is reflected in, say, AAP’s coyness when it comes to talking about communalism. Their insistence that they are not about vote banks so often seems to be a way to duck communal issues, a hesitation to take on communalism—and definitely overlook its affinity with good governance.

Muzaffarnagar riots took place in a context where the primary divide structuring Indian politics is no longer the secular-communal or even secular versus pseudo-secular divide which was hegemonic for a long time. The ‘communal forces’ too are no longer attacking ‘pseudo-secularism’. Modi is hardly heard lashing out at ‘minority appeasement’ or putting the Ram Mandir at the centre of his campaign for the 2014 elections. Instead it is all about good governance and growth. You can be communal without being communal today!

On the other hand, ‘secular’ parties too want to prove their mettle in the contest and fight over who can deliver on growth, development and good governance—the new ‘hegemonic’ agenda of politics. So while secularists might attack Modi for 2002, the so-called defence of the secular constitutional order seems secondary even for the secularists. In any case, this secularism is no longer what is being actively contested and fought over in politics while the new hegemonic agenda is largely Modi’s forte.

[2]I havemade this point earlierwhile discussing the good governance of the Aam Aadmi Party.

[3]I make a case for social transformation to get out of the secular-communal rut in ‘Hegemonic Secularism, Dominant Communalism: Imagining Social Transformation in India‘,Rethinking Marxism, Vol. 22, no. 1, 2010.