Journalist from The Pioneer, removed from WhatsApp group Tuesday, alleges agency being opaque to journos not toeing its line.

New Delhi: With the tussle within the CBI, between director Alok Verma and his number 2, special director Rakesh Asthana, refusing to die down, officers at the agency have apparently hit back — at journalists covering the agency.

The CBI, it seems, has initiated a media purge, with some beat reporters, whose reporting hasn’t allegedly found favour with the current dispensation, being ousted from the official WhatsApp group managed by the agency spokesperson.

It is learnt that some more journalists could also be removed from the group soon.

The reports filed by these journalists, however, seem to have little to do with the ongoing war within the CBI, sources said.

The WhatsApp group was created for the purpose of disseminating information to the media on ongoing cases and other issues in the CBI.

The latest to face this alleged censorship of sorts is The Pioneer reporter  Rakesh Kumar Singh, who was removed from the group Tuesday.

Singh, who has been covering CBI for the last 12 years as a regular beat correspondent, alleged that he was removed as “punishment” for his recent report on the murder of a journalist, Umesh Rajput, in Chhattisgarh.

When contacted CBI spokesperson Abhishek Dayal said that the official WhatsApp group functions as per the norms agreed upon by the journalists and refused to elaborate.

Another senior CBI officer said the decision was taken since many journalists wanted the group to be an “exclusive group”.

Sources in the CBI said that The Pioneer journalist was removed because another journalist from the same newspaper was added in the group.

“Usually we add one beat journalist from every media organisation in the group,” the official said. “It was understood that another journalist from Pioneer would be covering CBI henceforth, and hence Singh was removed.”

The official, however, added that the second Pioneer journalist voluntarily left the group Wednesday morning.

Not given reasons for removal: Singh

Singh told ThePrint that he was not told the reasons or given any warning before being ousted from the group.

He said that in his recent report on the journalist’s murder, he had exercised due diligence by asking the CBI spokesperson and another IPS officer mentioned in the story for comments, even as he had the relevant documents to support his report.

“I had put the CBI’s version in the story. However, despite that, the CBI sent us a rejoinder. That was published too, along with my replies,” Singh said. “Soon after, I was removed from the WhatsApp group.”

He alleged that in the last three years, the CBI has increasingly turned opaque towards journalists, even those looking for basic information from the agency.

“There are no answers available for seemingly-negative questions asked. Nobody is allowed into the CBI headquarters before 4 pm,” he alleged. “Even after that, one cannot meet officers and has to go straight to the media room.”

He claimed that Verma as well as Asthana also hardly ever held a briefing for the media, even on important cases.

Not the first instance

Singh is not the first journalist to be removed from CBI’s official WhatsApp media group.

The Telegraph journalist Imran Ahmed Siddiqui is also said to have got on the wrong side of the CBI for filing reports he claims were not to the agency’s liking.

Hours after Singh was removed, Siddiqui tweeted that he had also faced action. 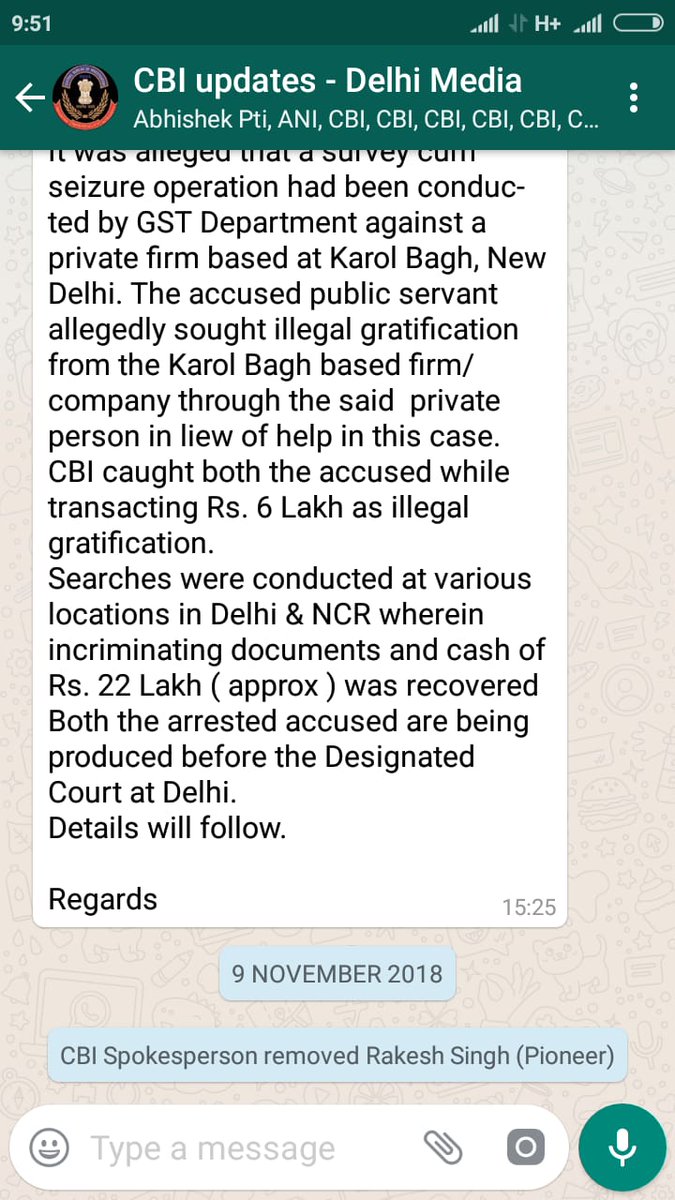 The CBI spokesperson removed me from it’s official WhatsApp group meant for reporters covering the agency. The reason being the spokesperson did not like my critical stories. And now blocked @Rakesh_Pioneer
@dayal_abhishek @PMOIndia @DrJitendraSingh @PIB_India #CBIVsCBI #CBI

190 people are talking about this

Siddiqui, who covered the CBI for 10 years, told ThePrint that when he was removed from the group in August, it was the second time that such action was taken against him.

“I was first removed in 2015, for reporting a story. Then I was added back,” he alleged. “In August, after we broke a story on Asthana’s statement being recorded in a case, I was removed again.”

Siddiqui further alleged that the CBI only accommodates journalists that toe its line on stories. “There is a coterie of reporters that CBI works closely with and there is a particular kind of narrative in stories it wants,” he said.

Yes. I am witness to @imrantelegraph‘s removal. He was removed because his reports were not in favour of CBI. He had exposed corrupt practices in the agency. Now @Rakesh_Pioneer being removed. Same reason, I believe.

The CBI spokesperson had first removed @imrantelegraph and now me as part of his personal vendetta. Is this a way of treating CBI reporters? @PMOIndia @PIB_India @DoPTGoI @dayal_abhishek

An officer in the CBI, who did not wish to be named, denied Siddiqui’s charges.

“There was no specific request from his office or him to be added to the group,” the official said. “Moreover, there are many parallel groups running within the journalists, where all information is shared.”

Another journalist reporting on the CBI alleged that in wake of the rift in the organisation, the agency’s bosses are now trying hard to restore their image.

“They are very wary of any kind of negative report about the CBI. For this, they think the best way is to control the media and the flow of information,” the journalist said.

Another senior journalist who covers the investigating agency said that such is the state-of-affairs that even regular press releases are not being shared on the group but are being sent individually to “select reporters”.

“Important and harmless information has been removed from the CBI website, including names of officers, their department and contact details and annual reports of the last three years,” the journalist told ThePrint.

The last time the CBI tried to control media’s access was when details emerged of then CBI director Ranjit Sinha having allegedly met top officials of the Anil Dhirubhai Ambani Group (ADAG) at least 50 times in 15 months at his official residence.

At that time, the agency had tried to restrict access of journalists to its headquarters.

Other journalists told ThePrint that the CBI’s method to tackle journalists is not a novel idea. WhatsApp media groups of political parties and also that of the Delhi government had allegedly resorted to the same tactic.

Aadhaar or cards: UIDAI and banks disagree on use of biometric authentication at ATMs
5 reasons Supreme Court pulled up Centre, states on drought
Modi Sarkar omitted key facts in application to SC for undisputed land in Ayodhya
Why well-to-do Indians are fleeing the country and economists aren’t returning