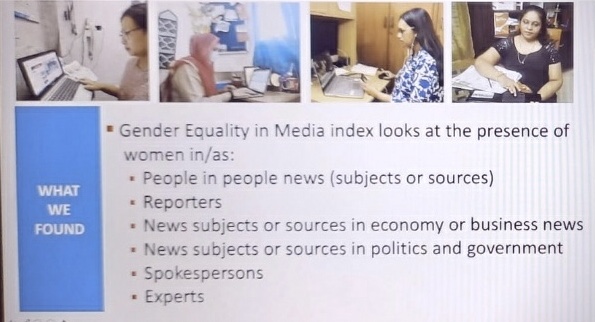 “No country in the world has achieved gender equality in media,” said Dr Sarah Macharia, Global Coordinator, Global Media Monitoring Project (GMMP), at an online event to launch the country report of GMMP India on 3 December 2021. And at this rate it will take the world 67 more years to achieve gender parity, as per the composite Gender Equality in Media (GEM) index, she added. The launch event was jointly hosted by the Women’s Christian College, Chennai, and the Network of Women in Media India (NWMI). India is ranked 15th out of the 16 Asian countries that participated in the GMMP 2020

Outlining the history of the Global Media Monitoring Project from its beginnings in 1994 to the present, Dr Macharia said that in 2020, 116 countries participated in the largest and deepest monitoring exercise. This time-series study so far has 25 years of data tracing the presence of women in media. India has participated in the GMMP since its inception in 1995, and NWMI has partnered this effort since 2010. 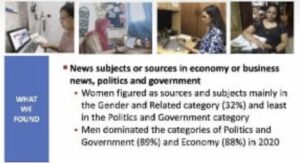 Dr Macharia recalled that the 2010 country report of India had stated, “Women were no longer missing from the Indian media. The question today is not so much where are the women but who are the women, also where and when do they appear? And what are they shown saying and doing, in other words, how are they represented?” But a decade later, India has turned in a disappointing performance with the overall participation of women in media as subjects and sources dropping first from 22% in 2010 to 21% in 2015 and then further to 14% in 2020.

As they presented the highlights of the findings of GMMP India, Dr Padmaja Shaw, India coordinator of GMMP 2020, Dr Mou Mukherjee Das, and Dr Sweta Singh, revealed that in 2020, many more male reporters were deployed in India than female reporters and women reporters no longer covered many topics that they used to, while male reporters continued to be assigned to all topics. Men dominated both as subjects and sources in topics like the Economy (88%), and Politics and Government (89%). Also, globally women’s presence as spokespersons rose to 24% in 2020 from 19% in 2015, while India saw a drastic decline from 15% in 2015 to a shocking 8% in 2020. 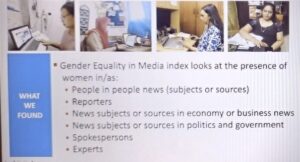 In the panel discussion (led by senior journalist Kavita Muralidharan) that followed the presentation of the data highlights, speakers debated the status of women in media from a range of perspectives. Nirupama Subramanian, National Editor (Mumbai), The Indian Express, expressed surprise at the marginal presence of women in media in India even as one saw prominent women such as Nirmala Sitharaman, Soumya Swaminathan, Gagandeep Kang often in the media in the coverage of the pandemic. She felt that usually “when you want the voice of a woman as thought leader, you don’t get it. That is also a reflection of our society.”

B Sreejan, Associate Editor, The New Indian Express, (Thiruvananthapuram) said, “The GMMP report is a revelation for me. It is clear that it is now time to make a deliberate effort to ensure women’s representation in media.” While narrating his experience in working with women experts he said, “Most women experts are unwilling to work within the deadline-based environment of media.” This exploration of what structural factors keep women out of the media as reporters or as sources continued when Subramanian, added, “not many women are staying on in journalism. Reporters are kept out of home till late. They need fire in their belly to insist on pursuing journalism. There is a lot of attrition after marriage. They come back in part-time roles. This is convenient for managements.” 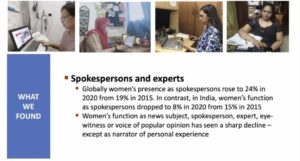 Dhanya Rajendran, Editor-in Chief, The News Minute, agreed that there should be intentional and deliberate work to increase the presence of women. She said, “There is no wilful attempt to leave women out. But there is a need to wilfully include them. A conscious effort needs to be made. It has to be a constant effort.” As for the attrition, Rajendran pointed out that both men and women are dropping out of journalism. “Last four to five years there has been a disillusionment with journalism itself. It doesn’t pay well, you are abused left and right, and the additional threat of what the government does. Lot of people are thinking it is not worth their mental and physical health.”

Alka Dhupkar, Assistant Editor, Times Internet Limited, spoke about the revenue model. She said, “The revenue model of Indian media houses is associated with politics. And now business is into it also. Male journalists are required to deal with the requirements of the revenue needs. Women are included as tokens.” She added, “Wherever this revenue model is broken, you will find more women in decision making positions. More female voices report on serious issues.” She suggested to whoever is giving out national awards, fellowships, international fellowships, “it will make a big difference both for gender and other issues to increase sensitivity if district level reporters are given these [awards and fellowships].” Addressing the issue of revenue models that Dhupkar had raised, Rajendran said that “It is difficult with advertisers looking at males 22+ as their target audience. Because they are likely to be earning and spending.” 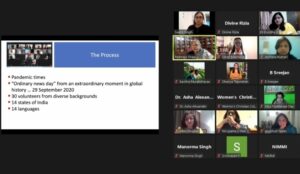 Dhupkar felt that women have not been news consumers since news is largely about electoral politics. The few occasions when women are targeted, it is because they are seen as consumers during festivals and celebrations. Not because there is a need to cover the issues concerning 50% of the population. Whenever real issues like school fees etc are covered, women show more engagement with news. Dhupkar suggested that “news organisations should shape their policies to make women feel welcome after pregnancy breaks and such. This is lacking in most media houses except for some national media organisations.”

Sreejan, agreed to a suggestion that Rajendran flagged about compiling lists of female experts to reach out to in newsrooms. “It is a good idea to compile panels of women experts. We can do it. And NWMI also can do this,” he said. Speaking about layoffs in Kerala media, he said that women are the worst hit. “If you are sending 5 people out, some three of those are women. The proportion of those left only increases the already existing gap. Only through constant campaigns can we go forward,” he said. 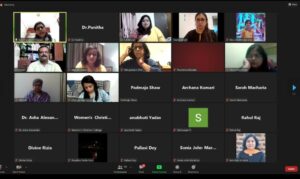 A member of the audience Ankita Apurva raised the question of caste reflections on GMMP, given that, she said, women in India is not a homogenous category and that caste-based discrimination exists in newsrooms. All the speakers agreed that affirmative action should definitely be devised to ensure representation.

In her final remarks Rajendran said that we must at the very least recognise the problem of gender gap in the media if we want to address it and find solutions. There has been a constant state of denial about the under-representation of women in media, she pointed out. She added that the political climate where young women journalists are arrested and threatened with cases becomes a deterrent to more women coming into journalism.

Dhupkar added, “We need to pay attention to the fascist agenda where women are being asked to produce ten children. So, when can such women come into education and professions if such demands are imposed on women?”

Ghatkopar's Ramabai Nagar: Where the Republic still lives
Radical Socialist Statement and Call for the elections of 2014
APCO to Kotler - The Artificial Glossing of Modi's Image
Sexual harassment at work: Tell and suffer #Vaw