The Tamil film, directed by Gnanavel and produced by Suriya s 2D Entertainment, got a rating of 9.6, helping it take the top position.

The other films that figure in the top 10 positions include Steven Spielberg s  Schindler s List , Peter Jackson s  The Lord of the Rings: The Return of the King , Quentin Tarantino s  Pulp Fiction  and Christopher Nolan s  Inception .

Inspired by true events that happened in Tamil Nadu in the nineties,  Jai Bhim  tells the moving story of an upright lawyer coming to the aid of poor, defenceless people from the Irular community who have no means to stand up to the might of an inhuman police force that seeks to exploit their helplessness.

At the beginning of Jai Bhim, police officers are shown separating a group of suspects based on their caste.

Those who are from the dominant castes are asked to leave, while others who are Dalits (formerly untouchables) or belong to tribal communities are asked to stay back. Later, police file false charges against those in the second group.

It s a stark, disturbing scene, with frightened men standing in the corner, somewhat aware of their fate – a reminder that such activities occur routinely, and how precarious are the lives of the marginalised, especially Dalits, in small towns and rural India.

Dalits make up about 20% of India s population, and despite laws to protect them they continue to face discrimination and violence.

Jai Bhim s title translates to “Long Live Bhim”, a slogan made popular by the followers of BR Ambedkar, a Dalit scholar and leader, who was the chief architect of India s constitution and also the country s first law minister.

Directed by TJ Gnanavel, and backed by Tamil star Suriya, the film tells the true story of a crusading lawyer – played by Suriya – who fought for a petition filed by a pregnant woman whose husband was placed in police custody and later declared missing. 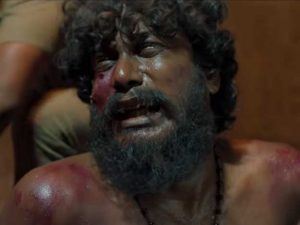 a pregnant woman whose husband was placed in police custody

Jai Bhim is part of a new movement in Tamil cinema where a number of young filmmakers are narrating stories of repression against Dalits.

“In the last 30 years, beginning with the observance of Ambedkar s centenary in 1991, the Dalit movement has been growing in Tamil Nadu,” said film historian S Theodore Baskaran.

“Forgotten Dalit ideologues of the 20th Century were redeemed from history. The ideas of [social activist and politician] Periyar and Ambedkar spread through the writings of many Dalit writers. In the last decade, some of the writers moved to cinema and made films. But they used the usual ingredients like songs, fights and melodrama.”

Now, Dalit narratives have also found space in independent or indie films in other Indian languages, including Anhey Gorhey Da Daan (Punjabi), exploring the lives of Dalit Sikhs; Masaan (Hindi), a romance between a young man from a family of crematorium workers and an upper caste girl; and Fandry and Sairat (both in Marathi). The last two films were directed by Nagraj Manjule, a Dalit himself