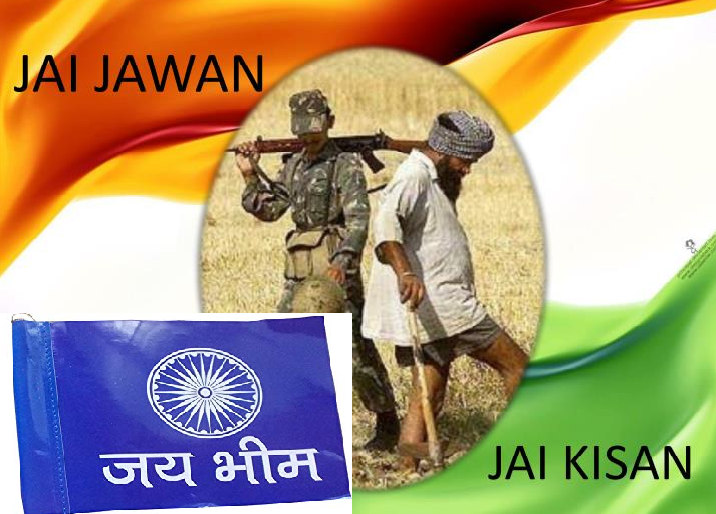 The soldier, the farmer, the Dalit come together

It was Lal Bahadur Shastri, when he was India’s prime minister, who coined the slogan “Jai Jawan! Jai Kisan!”, in the realistic understanding that the Jawan provides national external security (since then he has also been providing internal security due to failure of governance) and the Kisan provides the nation with food security.

Were Shastri alive today, it seems likely that he would have added “Jai Bhim!” to his original slogan, since it is the so-called Shudra, the “untouchable”, the present-day Dalit, who provides health security to the entire Indian population through the most basic and most essential sanitary services.

This certainly does not imply that Dalits should continue forever to provide such health security to our nation. Rather, correction of the current deplorable situation calls for social reform to ensure health security by provision of sanitary services as the participatory responsibility and duty of each and every citizen regardless of his/her status or position in society.

Indeed, the Attorney General admitted in Court that the SC/ST communities have faced “thousand years of deprivation” at the hands of society, by continued denial of access to the basic facilities of life including temples and schools. Only well-directed social reform together with destruction of the hereditary caste system can relieve and hopefully eliminate the millennia-long burden of social deprivation suffered by Dalits.

But there is a growing perception that the story of deprivation also pertains to the soldier and the farmer. The soldier (here the reference is to the Jawan and equivalent ranks in the Navy and Air Force, sometimes referred to as Other Ranks or OR) is essentially a poor man who, with military training and motivation, is the foundation of India’s military and national security. He joins military service when barely out of his teens and retires at age 38 to 42 years, with a paltry pension and and no job security, and sometimes with disability due to his military service. He is neglected by society at large, and is thus subjected to deprivation, although not of the sort or intensity that Dalits face.

As regards the Kisan, the bulk of them are small, marginal or subsistence farmers, almost all of them dependent upon the rains, usurious creditors and unfriendly markets controlled by greedy middlemen and callous governments. The truth of this is reflected in the fact of an average of more than one farmer committing suicide per day over the past couple of decades. To say that the average Kisan suffers deprivation is to put it rather mildly.

Is the worm turning?

The phrase “the worm turns” is used to describe the situation when people who have been treated badly for a long time suddenly become forceful and stop accepting a difficult situation.

It would appear that the Jawan, the Kisan and the Dalit are finding common cause based upon the deprivation of which they have been victims. This is understood from news that organizations representing the Jawan, the Kisan and the Dalit are getting together under the respective organizations of Indian Ex-Servicemen Movement (IESM), All India Kisan Sabha (AIKS) and All India Ambedkar Mahasabha (AIAM). Even though each naturally will agitate for their respective particular demands, it is understood that they are making common cause on three issues, namely,

# Put an end to the hate-driven mob violence and lynching which is plaguing the country,

# Revive and vote the Women’s Reservation Bill into law, to guarantee reservation for women in Lok Sabha and State Vidhan Sabhas, and

# Demand that the Aadhaar scheme be scrapped since it has wreaked havoc with welfare schemes, compromised civil liberties and is a threat of a state surveillance.

This coming together of IESM, AIKS and AIAM is to happen at New Delhi’s Jantar Mantar, the venue which was closed to all protests by a blanket ban imposed on environmental grounds by the National Green Tribunal. Hearing a bunch of petitions including that of the Mazdoor Kisan Shakti Sanghatan opposing the ban, the Supreme Court of India lifted the ban in July 2018, with direction to the Centre to frame guidelines to grant permission to hold such events.

It appears highly unlikely that the Centre will grant permission for this coming together as a joint “andolan” scheduled for 09 August, since it is understood that AIKS and AIAM have issued calls for nation-wide actions like “Jail Bharo” and “Bharat Bandh”, which obviously go against the current dispensation.

But even without Lal Bahadur Shastri’s charisma, it might appear that “Jai Bhim!” is getting clubbed with the “Jai Jawan!” and “Jai Kisan!” calls.