Jal Satyagraha 32 days on is peeling off soles, not determination 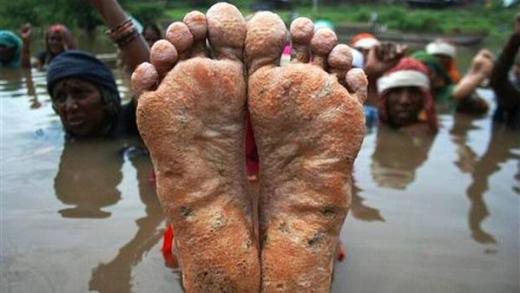 After 32 days of protesting in water – Jal Satyagraha is peeling off soles, not determination

In the Ghogalgaon village of Madhya Pradesh, 213 protesters have been standing in water for 32 days now. Here’s why, in spite of all the hardships they have to bear, they seem stubborn in the hope that the government will eventually provide them with justice.

In the Khandwa region of Madhya Pradesh, 213 protesters stand with half their bodies submerged in water. This act, embodying profound perseverance, is being carried out in the hope of persuading the government to provide the low-lying villages of the region with rehabilitation. This demand has risen in the face of the threat which haunts these villages, posed by the opening of gates of the Omkareshwar dam.

Marching into the 32nd day of the Jal Satyagraha, the gravity of the situation runs deeper than the water level of the dam which is creating such havoc.

In the event of such a transition being made on the part of the government, like the one concerning the Omkareshwar dam, the Supreme Court must notify the villagers and provide them with rehabilitation 6 months prior to the action being undertaken. However, not only were the villagers notified late, they were also not provided with any such compensation.

Continuous dialogue is taking place between the government and the protesters, albeit with barely any progress made so far. The government is forcing the villagers to accept the remuneration, which is in the form of a land, being provided to them.

The woe of the people rests in the fact that the land which has been given to them is of extremely poor quality and the hope of bountiful cultivation seems scarce.

The silver lining amidst all this painful chaos rests in the tenacity of the protesters. They hold profuse faith in their cause. Even though protesters have been fainting, with many having to be carried out, the number seems to be adamantly rising.

A majority of the them stand undeterred, even though their limbs have gone numb. With fishes feasting on their wounds, it seems as though their resilience is only growing stronger.

Their claim is that they only ask of the law, the policy makers and the Supreme Court, that which is right. Nothing else. A similar fight such as theirs in 2012 won, then how is their cause any different?

“We know we are going to win,” says Chittaroopa Palit, writer and one of the activists protesting the move.

When Ms. Palit was asked if she wanted to convey anything to the people of India through the medium of this article, she sheepishly asked, “What should I say?” Such is the honesty of their fight. It does not matter to them what the magnitude of their reach is, so long as the ones who are being hurt the most have justice served to them.

With the threat of such an impending disaster of broken houses and shattered livelihoods looming over their heads, their only hope is that the country also sides with them.

There has been police intervention and without due support, their physical capabilities can only survive for so long.

When Chittaroopa was probed further to say at least a few words, this is what she had to say,

“I appeal to the people of India to support the farmers who are being sidelined. In the process and name of development, resources are being taken away. Are we going to afford lives for them? Or shall they be pushed to the margin?”

The funny thing is, that even though it may seem like a lost cause to us, there was not a hint of surrender in her voice. It was almost like she knows the only ending is a happy ending. This faith is one which resonates with all the protesters. They seem far from defeated, injured as they may be.

They know that their cause is a just one and the fight has only just begun.