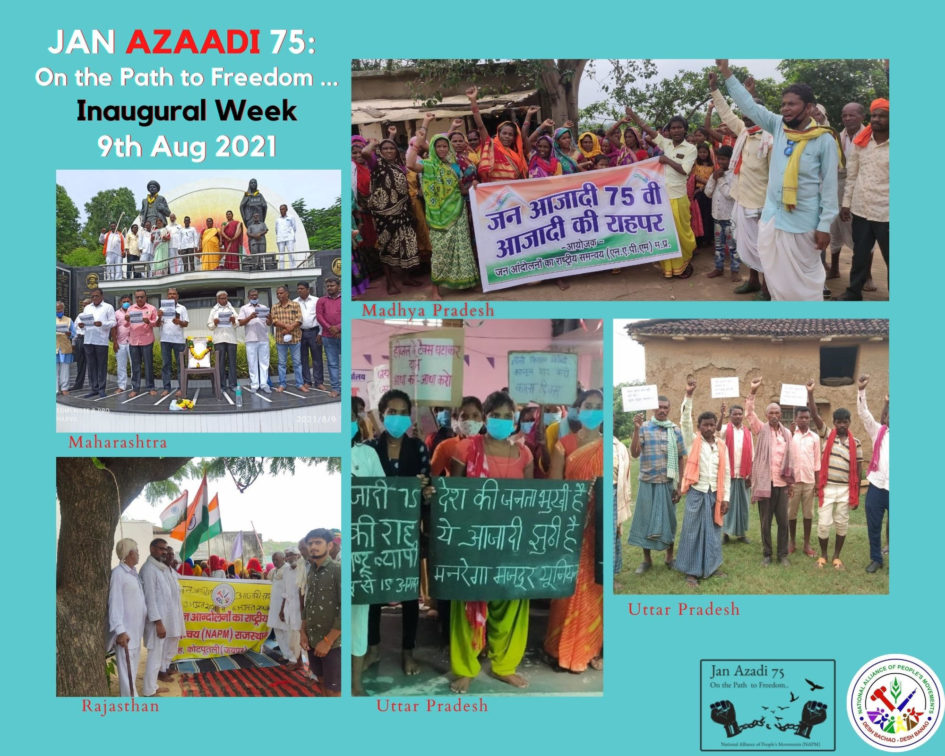 On the path of freedom / Azadi kee Raah par

Year-long nationwide programme kicks off with more than 250 programmes

Government’s ‘Amrit Mahotsav’ is farce, while not allowing Parliament to function,

9th Aug, 2021: Reaffirming the faith in Constitution authored by stalwarts like Dr. BR Ambedkar and Jaipal Singh Munda, vowing to protect it at any cost and defeat the fascist and divisive elements ruling the country today, tens of thousands of people across the country joined forces as part of the nation-wide programmes under the banner Jan Azadi 75. More than 250 programmes were organized in the states of Uttar Pradesh, Bihar, Kerala, Rajasthan, West Bengal, Delhi, Tamil Nadu, Odisha, Telangana, Andhra Pradesh, Madhya Pradesh, Maharashtra, Gujarat, Jharkhand, Chhattisgarh etc. NAPM feels that, 9th Aug which is significant for many reasons including the Quit India Movement and Adivasi Rights Day, shall mark another chapter in the history of resistance against anti-people and authoritarian forces of our country.

The day saw significant organizing from adivasi communities in many parts of the country. In Kerala, Satyagraha and street meetings was organized at 75 places by concerned citizens and groups. Uttar Pradesh which goes to polls next year saw massive participation in public meetings, oath-taking, parcha distribution and protest actions by farmers, agricultural workers, women and youth from over 60 places and numerous districts. In Madhya Pradesh and Odisha, programmes were organized in many districts marking the moment. There was active participation from different organizations and youth across Maharashtra as well as in Mumbai by community members from Mahul and housing rights groups.

Urban basti dwellers and dalit farm workers organized protests in Telangana. Adivasi farmers & youth congregated in Paderu in North Andhra. In different parts of Bihar, public actions were held, such as at Supaul, Araria, Khagadiya and Patna where workers, auto union members, community elders, basti dwellers and young activists participated. Solidarity actions were undertaken with the farmers’ movement and NAPM tent at Kisan Andolan in Delhi. Public events were held in different parts of North and West Bengal which also saw participation by fisher people. Industrial and sanitation workers protested in Bhilai, Chhattisgarh. Persons from across genders and community locations participated at all places.

Everywhere, people raised the important issues plaguing the country today and how there is so much more to be achieved in terms of freedoms and rights, as we mark the 75th years of independence. Activists challenged the claims of the Modi government and lamented the distortion of history and complete negation of the constitutional values, criminalization of the political dissent, state oppression and destruction of the public sector and all essential entitlements such as food security, education, health and livelihoods.  A collective people’s oath was taken at many places (attached).

NAPM also extended solidarity to the call given by the farmers groups and the trade unions for programmes across the country opposing the anti-farmer and workers policies of the government. Jan Azadi campaign received support from All India Forum for Right to Education (AIFRTE), which urged its members to join the programmes across the country. Across many places NAPM constituents also took part in the Joint Call against UAPA, draconian laws, Justice for Stan Swamy and release of all political prisoners. The day also included quite a few press conferences, online events and solidarity actions organized by different states locally.

The martyrs of our adivasi struggles, freedom movement and the recent farmers movement were remembered at different places across the country. An event was organized at the historic venue of the August Kranti Maidan, Mumbai today, the same place from which Mahatma Gandhi issued the clarion call – British Quit India! Angrez Bharat Chodo! The call galvanized the entire nation, as millions of ordinary Indians responded to the call. This movement ultimately paved the way towards our political independence. A similar call is needed today for Fascists and Corporates to quit public life.

On this occasion veteran freedom fighter Dr. G. G. Parikh said that, “Our nation is facing a deep crisis on every front, as those very forces that stood at the sidelines of our freedom struggle are today ruling us. These fascist communal forces continue to divide & polarise the masses, even as the government is selling & privatising our national assets & resources. The Peoples’ Movement must be ready for a long protracted democratic struggle, against a very oppressive regime to be rightly on the path of true freedom. We should be ready to go to jail, for any sacrifice that our nation requires.” In Kerala as well, Freedom fighter Vasu inaugurated the public event.

Activists associated with NAPM from across the country including Medha Patkar, Dr. Sunilam, Richa Singh, Kaladas Dehariya, Kusumam Joseph, Syed Bilal, Tapasi Dolui, Jagdish Khairaliya, Venkatayya, Dolly, Rajkumar Sinha, Ramarao Dora and thousands of other people participated in the public actions. At different events, they all expressed the sentiment that our nation, our society, our constitution is under threat. We are all part of the movement that is rooted in the values of our freedom struggle. We stand for social, economic, cultural & political equality & justice for the people of India. The Peoples movements have contributed to standing up for and defending the rights of the oppressed & exploited sections of our country. Today, as we face this fascist, manuvadi, communal & patriarchal onslaught, it is time for all committed to the unity of our country to come together & defend the people and our, constitution our nation. NAPM’s year-long campaign is one more attempt towards the same.

They echoed that the defiant movements of the farmers & workers have shown the strength & determined resolve of the people in posing an effective resistance to the Modi regime & its corporate backers. These mass movements as well as the anti-CAA-NRC movement of last year, led courageously by working class muslim women, student uprisings etc are all rooted in the values of our freedom struggle. It is these struggles that stand as a shield defending the interests of the ordinary masses and oppressed peoples of our country. The hate-mongering Modi regime has led our country on a path of political and economic destruction, with high inflation & growing unemployment. It is about time to wage the next phase of our freedom struggle against these forces.

Jan Azadi – “on the path of freedom / azadi kee raah par” is a campaign to connect the hearts, oppose economic inequality, get essential services, education, health, employment, fight poverty and fulfil the dreams and aspirations of a beautiful society. Our collective resolve will defeat the hate politics of the ruling party and challenge them on the ground.  Programmes, events, activities, protests, exhibitions, writings, outreach efforts etc would be organised round the year till next year by NAPM, its constituent members and allies across the country. The occasion is to once again take the values of the freedom struggle and rich reminders of people’s struggles over 75 years to the nook and corner of this country and counter the government misinformation and propaganda

The God Argument- Case against Religion and For Humanism
#India- time to think beyond rape and engage with deep rooted sexism #Vaw #genderbias
#India - Home ministry has own list, different from IB's, of donors and donees #WTFnews
Karnataka Governor - We’ll continue to speak of saffronisation and achieve it #WTFnews