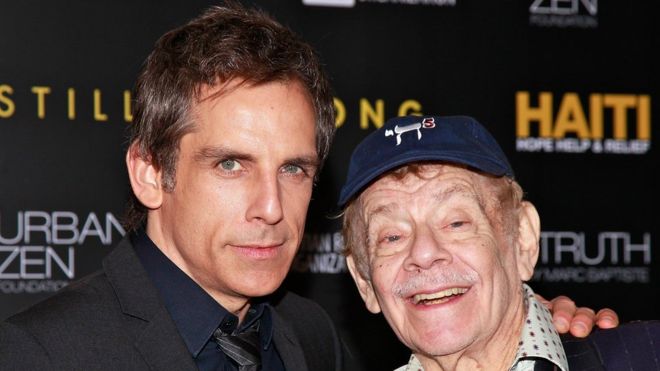 “I’m sad to say that my father passed away from natural causes,” Ben wrote on Twitter, calling him “a great dad and grandfather” and “dedicated husband”.

Jason Alexander, who played George on Seinfeld, called him “a great actor, a great man [and] a lovely friend”.

Stiller spent many years in a comic duo with wife Anne Meara, who died in 2015.

His other roles included Arthur Spooner in TV sitcom The King of Queens.

Stiller appeared with son Ben in several film comedies, among them Zoolander, Zoolander 2 and The Heartbreak Kid.

He also had roles in both the original 1988 film of Hairspray and the musical adaptation that followed in 2007.

For many, though, he will be best remembered as Alexander’s on-screen father in Seinfeld, a role he played for six years.

His role as the volatile and cantankerous Frank Costanza saw him nominated for a Primetime Emmy in 1997.

John Randolph was originally cast in the part but only made one appearance before Stiller replaced him.

“I’ll never forget, on the first day of the shoot in front of the audience… the whole cast surrounded me, wishing me well,” he remembered in 2005.

“They were rooting for me. They were protecting me from the fear… From that day on, those were the best years of my life as an actor.”

Writing on Twitter, Alexander remembered his “beloved friend” as “perhaps the kindest man I ever had the honour to work beside”.

“He made me laugh when I was a child and every day I was with him,” he continued. “I adored this man.”

Stiller met Meara at a New York casting call in 1953 and they married the following year.

They toured the US as a double act and made more than 30 appearances on The Ed Sullivan Show, CBS’s top-rated variety programme.

In 2007 Stiller and Meara were given a joint star on the Hollywood Walk of Fame in Los Angeles.

Three years later the couple hosted a web-based chat show, shot in their home in Manhattan’s Upper West Side.

Actor Josh Gad, best known for voicing Olaf the snowman in Disney’s Frozen, was among those to pay tribute on social media.

“Thank you Jerry for your brilliant comedic prowess,” he tweeted, saying there was “nobody who quite turned a phrase” like him.

Comedian Gilbert Gottfried, another Disney voice actor, also paid homage. “On stage or off he could put a smile on your face,” he wrote.

Drought vs IPL: The show must go on. Let the poor be damned
How is Manmohan Singh different from nuclear waste?
Dalit boy forbidden from attending classes; faces insult on #RepublicDay
7 killed as Fire breaks out at cracker shop in Barmer