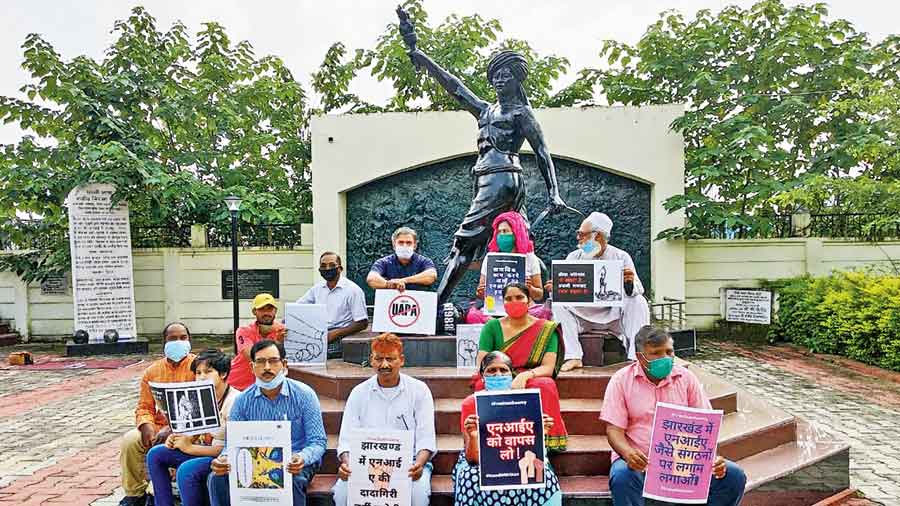 Several penal organizations, activists, intellectuals and concerned citizens from Jharkhand protest against the arrest of Stan Swamy by the National Investigation Agency (NIA) at Birsa Munda Samadhi in Ranchi on MondayManob Chowdhary

Over 60 representatives of public organisations and tribal activists staged a hunger strike near tribal icon Birsa Munda’s memorial in Ranchi on Monday to protest against the arrest of 83-year-old Jesuit priest and rights activist Father Stan Swamy while national Opposition leaders condemned the NIA’s October 8 action.

“The arrest of 83-year-old (Father) Stan Swamy by the NIA is an attack on Birsa Munda’s legacy and this is what prompted us to stage the hunger strike (between 10am and 4pm) at the tribal icon’s samadhi sthal. Everyone in the state and the country knows the role played by Stan Swamy in raising his voice for the tribals, work on displacement, land alienation and rights of gram sabhas and for innocent Adivasis languishing in jails.

“The NIA at the behest of the central government has arrested him on fabricated charges. We demand his release and repeal of the Unlawful Activities (Prevention) Act which is being used by political parties to harass those who raise voices of dissent,” said Kujur.

Tribal Advisory Committee member Ratan Tirkey, who had met Fr Swamy at his Bagaicha residence at Namkum, Ranchi, a few hours before he was taken away by the NIA, urged chief minister Hemant Soren to immediately write to the Centre for release of the elderly priest.

“We know that the chief minister has voiced his support for Stan Swamy through his tweets but we would like Hemantji to also write to the Union government for the release of the priest and also to stop the misuse of NIA by the Centre and take a stand as has been taken by other Opposition-ruled states like Bengal, Chhattisgarh and Kerala,” said Tirkey.

Soren had tweeted on his official handle on Friday night: “What message does the BJP government at the Centre want to send by arresting octogenarian Stan Swamy who has been raising his voice for the poor, the deprived and the tribals? Why is the Centre adamant on stifling all voices of dissent?”

A few hours later on Friday, the chief minister re-tweeted the JMM Lohardaga unit’s post questioning the arrest of Fr Swamy: “What problem does the Centre have with those who raise their voice in support of the tribals? Stan Swamy, who had fought for rights of tribals throughout his life, has been arrested by the NIA at the behest of the Union government. Is it a crime to raise voice for tribals?”

On Sunday, Soren told reporters in Ranchi that the arrest was a part of the BJP-led central government’s hidden agenda. “Stan Swamy has been working for the Adivasis and the poor since decades and his arrest is part of the BJP’s hidden agenda and an attack on democratic institutions,” he had said.

Congress MP from Kerala and former Union minister Shashi Tharoor on Monday  condemned the arrest in the 2018 Bhima Koregaon case.

“Arresting an 83-year-old social worker (Fr Swamy) who has brought help to the helpless for decades is a national disgrace. It’s also eroding our country’s standing as a liberal democracy in the eyes of the world,” Tharoor tweeted.

On Saturday, Congress MP Jairam Ramesh had condemned the arrest.

“This is truly, truly outrageous. I have known Father Swamy and am well aware of his work with the adivasis. This is Modi Sarkar’s tactics of browbeating and intimidation against social activists. ATROCIOUS!” Ramesh had tweeted.