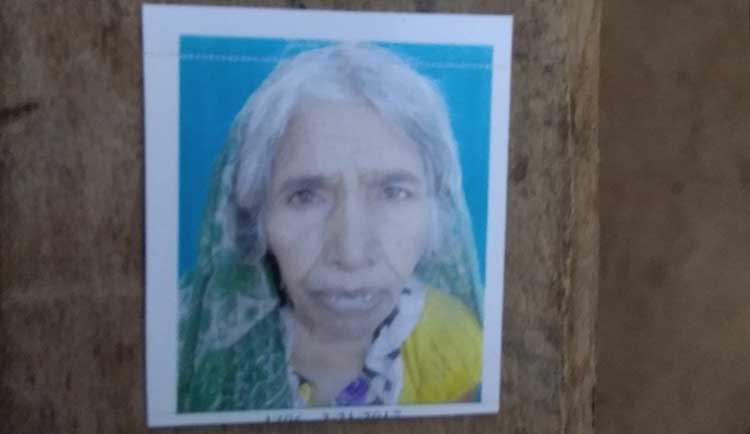 Etwariya Devi, a 67-year-old widow, died of hunger and exhaustion on 25 December in Sonpurwa village of Majhiaon block of Garhwa district (Jharkhand). She lived with her son Ghura Vishwakarma, daughter-in-law Usha Devi and their three children in a dilapidated kutcha house. The family has a hand-to-mouth existence and is routinely unable to access adequate nutrition. Surviving the day on only a meal of rice and salt is not uncommon for it. The shortage of food worsened for Etwariya Devi when the family was denied ration from October to December 2017 and she did not get her pension for the months of November and December.

Etwariya Devi’s family was denied their monthly entitlement of 25 kg of grain under the National Food Security Act for three months preceding her death. In October, Usha Devi’s fingerprint could not be authenticated in the Aadhaar-based biometric Point of Sale (PoS) machine at the local ration shop and she was told by the ration dealer to come back some other day. When she went back after a few days, she was told that the ration stock had finished. The dealer did not give her ration in November as he claimed that he was not allotted grains for that month. No grain was distributed at the ration shop in December till Etwariya Devi’s death as the PoS machine was allegedly dysfunctional

A general complaint of people of the village is that the dealer does not distribute ration as per the transactions made in the PoS machine. In October, for most ration card holders he transacted twice the monthly entitlement of grain and kerosene quantities but distributed for only a month.

Denial of ration to Etwariya’s family is yet another example of the disruptions in the Public Distribution System (PDS) caused due to its mandatory integration with Aadhaar. Dealers have started tampering with digital records in order to hide accumulated stocks. One way they do this is to separate authentication and distribution – get people’s fingerprints and/or tell them that they would get rations later, and then play hide-and-seek. As per the online records, ration was allotted to the dealer for October-December. But the dealer did not distribute ration to many cardholders claiming that he did not have adequate ration stock. These irregularities show that the introduction of Aadhaar-based biometric authentication has failed to curb leakages in the PDS. In fact, it has created new barriers to the access of rations.

Etwariya Devi used to receive her monthly old age pension of Rs. 600 a month in her Aadhaar-linked bank account at the local Community Service Provider (CSP) centre (under Jharkhand Grameen Bank). She last collected her pension in October 2017. In November, no pension amount was credited in her account. When she went to withdraw her pension for December, after authenticating her fingerprint in the PoS machine, the CSP operator told her that the authentication had failed. But as per the bank statement of Etwariya’s account, a transaction of Rs. 600 was made on that day (8 December). In the CSP model of banking, the money is electronically transferred from customer’s account to that of the CSP operator once the customer authenticates the Aadhaar-based transaction. Once the money is credited to the CSP’s account, the payment is made to the customer. The CSP operator of Sonpurwa claims that the internet connectivity was disrupted just after Etwari Devi authenticated her fingerprint, because of which her pension amount was not credited to the CSP account.

Continual denial of Right to Life by the government

Etwari Devi’s death due to starvation follows on the heels of another death due to prolonged hunger and exhaustion in the district. It may be recalled that 64-year-old Premani Kunwar succumbed to starvation after she was denied her ration and pension due to linkage of these programmes with Aadhaar. Starvation death of another person in the same district exposes the lack of seriousness in the government towards addressing the issues in delivery of ration and pension.

Disruptions in the delivery of ration and pension in Jharkhand continue unabated. For those living on the margins, denial of such crucial entitlements leads to the violation of mere right to life.

The Jharkhand Right to Food Campaign reiterates its following demands: (1) Immediate dismissal of the ration dealer of Sonpurwa and registering FIR against him for embezzlement of PDS grain and tampering of PDS records; (2) Immediate shift to “offline” delivery of PDS entitlements; (3) Transfer of all ration shop licenses from private dealers to Gram Panchayats or self-help groups; and (4) Introduction of pulses and edible oil in the PDS.

Report of fact finding into the death of Etwariya Devi

(The annexures mentioned in the report can be downloaded from https://drive.google.com/open?id=1_1ZwByy-QV9A-gI9KpALkoCt98sty5Hy)

Etwariya Devi, a 67 years old widow, passed away on 25 December. She did not get sufficient food and nutrition over a long period of time. She used to live with her son Ghura Vishwakarma, daughter-in-law Usha Devi and their children. The family does not own any land, except a small piece of land on which their dilapidated kutcha house stands. Ghura Vishwakarma works as unskilled labourer under contractors in other states. Usha Devi works as unskilled labourer in local agricultural works. The family routinely faced shortage of food and nutrition. None of the members of the family ate on the night of 24 December as there was no grain in the house.

The family was heavily dependent on 25 kg grains, entitled under the Priority Household card under National Food Security Act. It did not get ration in October, November and December (till the death of Etwariya). In October, Usha Devi’s (who collected the ration every month on behalf of the family) fingerprint did not work in the POS machine. In November, the dealer said that he had not been allotted grain for that month and in December, the dealer said that the POS machine was not working and had to be repaired. In the last three months, the shortage of food was severe for the family.

Etwariya was a pensioner under the Indira Gandhi Old Age Pension Scheme. She last received her pension from the local Pragya Kendra in October. Pension amount of Rs. 600 was credited in her account on 7 December. She went to the Kendra on 4 December and a transaction of Rs. 503 was made in her account. According to the CSP Anil Chowdhary, the internet connectivity broke right after she authenticated her fingerprint and the money was not credited to the CSP’s account. As a result, he did not give her the money. Similarly, on 8 December, transaction of Rs. 600 was made, but she was not given the money as the internet connection again broke. The CSP claims to have received the money in his account on 19 December. When asked why did not give the money to Etwari before 25 December, he said that she did not visit the Kendra again. The CSP deposited Rs. 1200 back in her account on 26 December.

Etwariya Devi, aged 67 years, lived with her son Ghura Vishwakarma (41 years), his wife Usha Devi (32 years) and their three children – Kiran Kumari (12 years), Sandhya Kumari (8 years) and Akash Vishwakarma (4 years).[1] Etwariya Devi’s husband passed away in 2007. Etwari Devi’s family lives in a kutcha house situated on a plot of around 7.5 decimals. They do not own any land, except the plot on which they live.

There are two rooms that are almost bare. Etwariya used to sleep on a bed of straw and some pieces of cloth (Annexure 1). The other room also has only a few clothes and tattered blankets. There are some containers that are used to store grains. According to the family, the containers have been lying empty since ages. In July, the family repaired the roof the house. One of the neighbours Devan Chhatrpati, gave some khapras for free, as the family did not have enough khapras. Wages of some people who had worked in repairing the roof are still pending.

According to Etwari’s family and others in the village, Ghura Vishwakarma is mentally not very sharp. He works as unskilled labourer. In absence of adequate work in the village, he migrates to other states. He was in Rajasthan for the last three months where he earned Rs. 220 a day. Normally, the contractors deposit his wages in his account every 30-45 days. But he has not received his remuneration for the work done in Rajasthan as he had to rush back after his mother’s death. Usha Devi works as unskilled labourer in local agricultural works.

Usha Devi has not repaid a loan of Rs. 3000 taken a few years ago. She paid Rs. 2000 as interest of the loan this year, but has not been able to repay the principal yet. The family had also borrowed Rs. 600 from a neighbor long back that has not been repaid yet. Usha Devi bought some groceries from the local grocery stores (for Rs. 70) this week, but is yet to pay them.

Etwariya Devi passed away at around 11:00 am on 25 December 2017. According to Usha Devi, Etwariya Devi collapsed at around 10:00 am and passed away after an hour.  The block Pramukh visited the family and gave Rs. 1000 for performing the last rites. The block Nazir also visited. He told the family that the Block Development Officer said that the family should perform the last rites and that they would get the money for it later.

Availability of food in the family

Access of the family to other social welfare programmes

The family members get medicines from the local “desi” doctor. When Etwariya Devi fell sick a month ago (fever, cough and upset stomach), the doctor charged Rs. 600 for giving her medicines.  The money is still due.  The family also owes Rs. 400 to him for giving medicines to the children a few months ago.

The dealer Chandradev Sharma said that he could not distribute ration in November as he was not allotted any ration for that month. He also said that he gave ration to Etwariya’s family in October 2017. When he was told that the online transaction list for October did not corroborate with his statement, he said that it was not possible. Ration could not be distributed in December, as the POS machine stopped working on 22 December. He got the machine fixed by 25 December. When he was asked why he did not use the “exception register” to distribute ration in December, he said that the register was only for exceptional cases and not for everyone. Even though he was aware of the order to maintain an exception register, he did not receive any letter regarding this from the department.

According to the online allotment list, Chandradev Sharma was allotted grain for October, November and December.

Etwaria Devi last withdrew a sum of Rs. 1200 from her account in October. She went to the CSP in November, but her pension for that month was not credited in her account. She went again on 4 December. A transaction of Rs. 503 was processed, but the internet connection broke right after she authenticated her thumbprint. As a result, the money was not credited in the CSP’s bank account and he could not give her the money. It happened again on 8 December when Etwariya Devi failed to withdraw Rs. 600. Both the times, Anil Chowdhary asked Etwariya to come again. Usha Devi visited the Pragya Kendra a couple of times to inquire about the money. The money (Rs. 503+600) was credited to the CSP’s account on 19 December, but Etwariya did not visit Anil Chowdhary to collect the money. Anil transferred the money (Rs. 1200) back to Etwariya’s account on 26 December. He also said that internet connectivity often broke in the middle of transactions. Statement of bank account of Etwariya from 1 November-26 December attached (Annexure 5).