Jharkhand – Big ‘danger’ of NPR: A babu can tag anyone as doubtful citizen 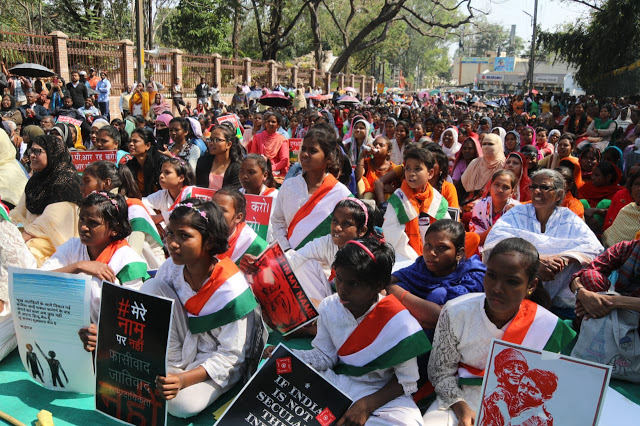 People in large numbers from across Jharkhand gathered at the Raj Bhawan in Ranchi to demand that the Hemant Soren government reject National Population Register (NPR) and stop all NPR-related activities. The people’s organisations which participated in the dharna under the banner of the Jharkhand Janadhikar Mahasabha (JMM) resolved to intensify their struggle, insisting, NPR is not a Hindu-Muslim issue but is essentially anti-poor.

Speaking on the occasion, ex-IAS officer Kannan Gopinathan, who resigned from the services last year over “growing attacks” on the democracy, warned, poor people — especially women and adivasis — who cannot produce documents would suffer, insisting, “The biggest danger of NPR is that one babu in a block can tag anyone as a doubtful citizen…”

Participants included protesters from Kadru Bagh, Ranchi’s own Shaheen Bagh, where hundreds of women have united in a continuous sit-in against NPR, Citizenship Amendment Act (CAA) and National Register of Citizens (NRC), for several weeks. Their protest, claimed a JMM organiser, inspired many from other parts of Jharkhand, including all the main cities and smaller towns, where regular protests began.

The dharna epitomized a rapidly growing concern among all communities in Jharkhand about the NPR-NRC process, which is due to start on April 1 along with the household listing of the 2021 census. Most people in Jharkhand don’t have the documents that are likely to be required from them if they are asked to prove their citizenship.

Introducing the event, James Herenj wondered, “Many state governments are opposing NRC and some have appealed to the central government to repeal the CAA. Kerala and West Bengal have issued an order categorically staying all NPR activities. What is stopping Jharkhand from doing this?”
Those who spoke included Vinod Singh, MLA, and well-known Belgium-born development economist Jean Dreze, who talked of “communal, anti-poor, and exclusionary” nature of the CAA-NPR-NRC process, especially in the context of Jharkhand with its large adivasi population.

This is what some of the participants said:
Sifwa: “Today, Muslim women have taken the responsibility to fight the fascist government and save the country from them. The mothers of Shaheen Bagh have shown us the way. The killers of Rohit Vemula were also from the BJP. We will also fight for his justice as well as Pehlu Khan, Aklhaq, and others.”
Ibrar Ahmed: “It is a very positive step that the movement against NRC in Jharkhand is now being led and energised not only my Muslims but also by large numbers of women and men from all communities”.

Dayamani Barla: “RSS wants to take away the lands and evict the Jharkhandis from their own lands. We will not let them succeed… This is not a fight of religions, it is a fight to save our country and constitution, to save our hard-earned rights.”

Shahbaaz: “The government is trying hard to break people’s solidarity. This Act is outright communal. We must continue fighting it. Their next step will be a Universal Civil Code. We must be united and strong in fighting that as well.”

PP Verma: “This is not only a Muslim movement. This a movement of Dalits, Adivasis, villagers, poor. There are many non-Muslims who have come out today to make this message clear.”

Aloka Kujur: “Jharkhand is a state of hills and jungles where for many years there have been attempts are uprooting the Jharkhandis from their land and lives. In such a situation, CAA-NPR-NRC will be very dangerous for Jharkhand. In the Fifth Schedule Areas, the Gram Sabha is the most powerful and only they will create laws for their people”.

Solomon: “CAA-NRC are being brought in to break the Constitution. The struggle to save it shall continue and be taken forward.”

Sunil Minj: “Those who are rich will find a way out. But what about Dalits who are poor and landless? How will they prove their identity/citizenship? Where will they find safety? CAA-NRC is an attack against the Constitution.”