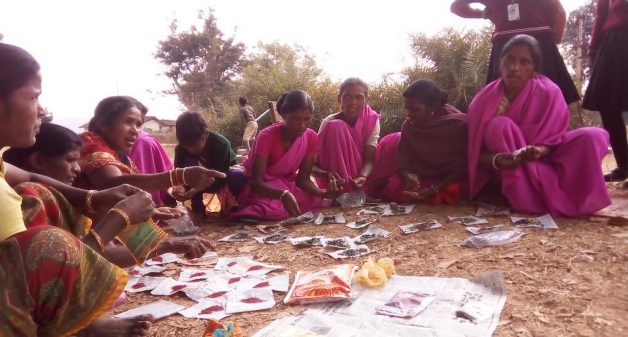 Women of self-help group in Ghagra village of Gumla district in Jharkhand distributing kitchen garden seeds among themselves. (Photo by Soumi Kundu)

A health screening of adolescent girls and young women in Gumla district of Jharkhand showed that 90% of them were anemic and had less than normal blood components. The study was conducted by Public Health Foundation of India (PHFI) on a random sample of 100 young adults aged between 16 and 22 years from villages in Gumla.

Gumla district has 71 % tribal households across its rural expanse, as per the Gumla District Census Handbook, 2011. Over 65% of the tribal population are cultivators while 20% are agricultural laborers. Farming carried out in villages such as those in Gumla provides us with a reservoir of food. As we choose what we eat, from the bounty of diverse food crops grown by farming families, what do the farmers eat? What do families in Gumla district, where the screening was done, usually eat?

While a study revealed that the villagers’ diet consisted mostly of rice and leafy vegetables, the National Family Health Survey (2015-16) revealed that the percentage of rural women with anemia and lower body-mass index in Jharkhand was higher than the national average. To enrich villagers’ diet and make it more nutritious in a cost-effective manner, reviving traditional kitchen gardens appear to be the best option.

Everyday diet in tribal households of Raidih block of Gumla includes rice gruel and a vegetable-based curry or chutney. Pulses or animal foods are consumed once a week at the most. Even this minimal diet pattern is not followed throughout the year; it is a common practice to reduce the number of meals in a day when there is scarcity of food or income.

“Food is rice and leafy vegetables, usually marua saag, commonly found here after the monsoons. Everyone has a little quantity of pulses at home. Good food would mean eating rice with lentils, potatoes, vegetables and curry. We cannot eat good food every day,” 40-year-old Rita Devi from Patratoli village in Nawagarh panchayat told VillageSquare.in. Hailing from the Oraon tribal community, Rita has no land and works as a sharecropper half the year. The rest of the year she works as a daily wage laborer in Gumla town, which is 20 km away.

“We grow urad dal (black gram) every year, yet we consume it only occasionally. To eat it more often, a family would need 20 to 30 kg. But on an average a household will have only 5 kg, as the rest is sold,” Seema Devi, a self-help group member from Panantoli village in Silam panchayat, told VillageSquare.in. 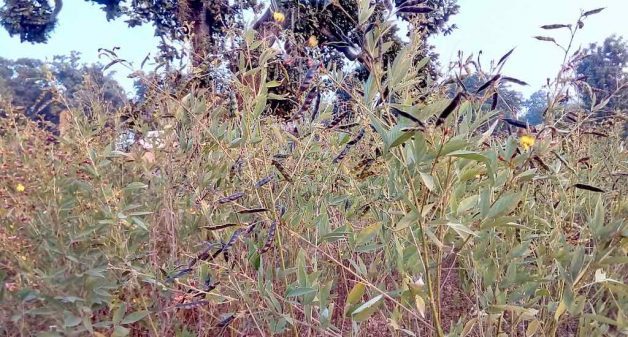 Arhar plant, that would add much needed pulses to the diet, grown by a household as part of a kitchen garden at Navatoli village, Gumla district. (Photo by Soumi Kundu)

Local diets have undergone stark changes since the past generation. With the adoption of rice and wheat-based food, consumption of once-popular millets has drastically reduced. Only a handful of households grow millets now. Major crops cultivated in the district include cereals like paddy, maize and finger millet, pulses such as arhar and urad and oilseeds such as groundnut, mustard and linseed.

While a wide variety of food is available in the markets, the food consumed by rural households is less nutritious. Use of locally abundant high-nutrient greens such as lebri saag, charota saag, bhatua saag and karonda saag has come down. Villagers are more interested in growing and consuming hybrid varieties of vegetables such as radish, cauliflower, cabbage, carrots and spinach.

In Gumla, there is an existing trend of growing select food crops in homestead lands and between rows of crops in farmlands, during monsoons. The families grow maize, vegetables, cowpea and dolichos beans for home consumption, buying seeds at the market or preserving from earlier harvests.

Those without homestead lands use available spaces near the house, or with mutual consent, homestead lands of others. Based on this practice, PRADAN (Professional Assistance for Development Action), an NGO, piloted an initiative named Poshan Vari in July 2016. Designed as a nutrition-based cultivation in homestead lands, Poshan Vari gardens were grown in 47 villages across nine panchayats.

The intervention covering over 600 households was intended to enrich the diet and improve the nutrition status of the family. All the households did not have homestead lands; where available, the size varied between 2 and 10 sq., the most common being 5 sq. ft to 7 sq. ft. Families of small and marginal farmers with farmlands measuring less than two hectares grew kitchen gardens.

The number and nature of plants grown in kitchen gardens depend on many factors. These include availability and extent of homestead land, family size, manpower in the house and source of water if grown after monsoons, besides the family’s knowledge and purchasing power of seeds.

A group discussion in Shahitola village centered round growing vegetables. “For how many days can we buy vegetables from the market? Where will we find money to buy them?” the women told VillageSquare.in. The women’s words echo one of the primary goals of kitchen gardens – enriching their diets by growing food for home consumption. 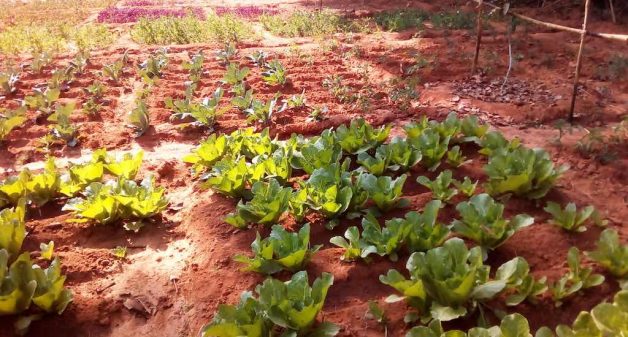 A winter kitchen garden with vegetable plants that would add variety and nutrition to the villagers’ diet. (Photo by Soumi Kundu)

In a study done by Centre for Development Research, Pune, on the status of kitchen gardens, it was observed that in Gumla, with about 60 to 90 hours of labor invested across four months, the households could save Rs 1,600 to Rs 3,200. This is the money saved on expenditure for food from local markets because of the produce available in home gardens.

“When men in our village waste so much money on liquor, can’t we spend 100 rupees to buy seeds to grow vegetables for ourselves?” a Shahitola woman growing kidney beans and French beans in her kitchen garden told VillageSquare.in.

In addition to saving on income, kitchen gardens substantiated the existing diet. From their kitchen gardens, participant households availed seven types of vegetables, three types of legumes, three types of green leafy vegetables, and a fruit, cereal and tuber each for at least one agricultural cycle. Vegetables can be used in rotation and there is a wide availability of food for at least 3 to 4 months in one cycle.

In the first year of implementation of the Poshan Vari initiative in Gumla, villagers showed an enthusiastic interest in continuing the practice. Women are the key participants in growing kitchen gardens. Given that today nearly 70% of the total agricultural work (Source: Reuters) in India is done by women, Poshan Vari is designed in a way that it does not add to the women’s work burden. They spent less than two hours a day to nurture the gardens.

As an intervention, Poshan Vari provides a rich blend of seeds of local varieties of cereals, pulses, vegetables and green leafy vegetables that are organically grown, to increase both the availability and diversity of food in rural households.

In the present design of the intervention, it is a challenge to include families with neither farmland nor homestead land and to use spaces near such households optimally, to grow food.

Such interventions are still relegated to development literature, despite the need to promote them to overcome the present agriculture-nutrition disconnect in India. It is time that such initiatives are replicated and agricultural processes are reconfigured so as to increase availability of food among rural households.

Existing users in Gumla acknowledge the value of kitchen gardens. Kitchen gardens can fix the skewed gender patterns in food consumption prevalent today in Gumla district and across India, besides improving the nutritional status of women.