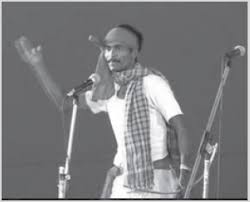 Jiten Marandi, cultural activist and one of the secretaries of Committee for the Release of Political Prisoners was released from Birsa jail in Hotwar in Ranchi on Thursday.

He was accused with 19 others in 2008 in the October 26, 2007 massacre at Chilkari in which 19 persons, including Anup Marandi, son of the former Chief Minister Babulal Marandi, were kille. While the Jharkhand High Court acquitted him in December 2011 of the death sentence given to him by a Sessions Court, he had to remain in jail as the government invoked the Jharkhand Crime Control Act (2002) against him.

“Jiten was falsely accused in all cases because he had taken active part in resistance movements going on in Jharkhand. He had to stay in jail for five years because the authorities had filed these politically-motivated cases.

“He would have got released even sooner but he chose to not appeal against the government’s order which remained in force for two years,” said Sushanto Mukherjee, Marxist Coordination Committee central committee member, who received Mr. Marandi after his release from Birsa jail in Hotwar.