RANCHI : In another shocking incident two Muslim men herding eight buffaloes who were on their way to a local Friday market were tortured  and hanged to death from a tree by unknown assailants at Balumath forests in Latehar district, 100km from here, in the wee hours on Friday.

‘The buffaloes were freed by the men and locals claimed the assailants were Hindu radicals’ reported Times of India.

Muhammad Majloom, 35, and Azad Khan, 15, were allegedly hanged from a tree after being tortured in Jhabbar village of Latehar district near Ranchi on Friday. The two had their hands tied together behind their backs and their mouth was closed with a cloth.

“The sight suggested that the two of them were subjected to extreme levels of brutality. It means that the assailants were moved by extreme hatred,” a police officer was quoted as saying.

Torturing cattle traders by Hindu radicals is very common in BJP ruled Jharkhand. Many times such traders were gone missing and never traced by police.

Trucks  carrying animal skins from Bihar on their way to Kolkata are commonly attacked in Jharkhand. Drivers of such trucks are severely beaten and the skins destroyed 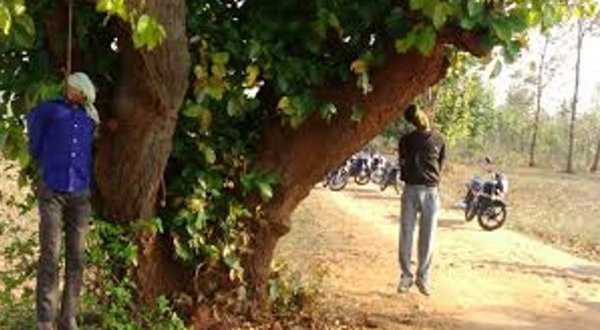 Kolkata -bound  trucks  carrying beef/ animal skins  coming from neighbouring state Bihar are thoroughly checked by Hindu radicals  on the highways of Jharkhand and on the basis of mere suspicion the drivers are tortured and goods are destroyed.

Ironically most of the Kolkata based beef exporters are Hindus.http://muslimmirror.com/eng/two-muslim-cattle-traders-were-hanged-to-death-by-hindu-radicals-in-jharkhand/