DIG (Dumka) Akhilesh Kumar Jha said four people have been arrested for their prima facie involvement in the incident. The victims had allegedly stolen the buffaloes from a village and were sneaking out when they were caught. 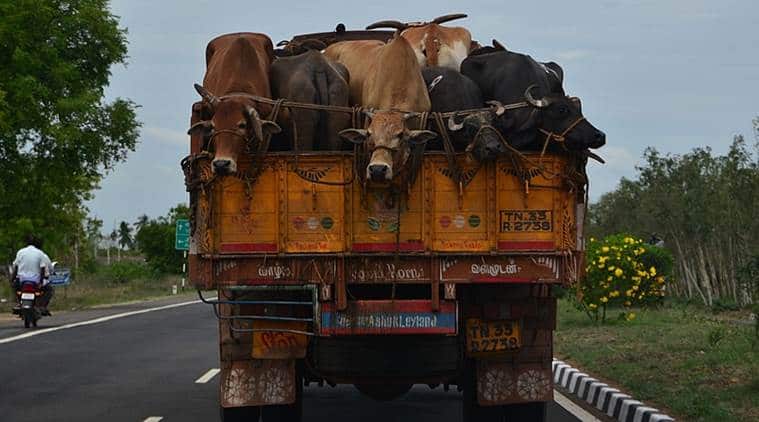 The duo were caught by the villagers in the morning and was beaten to death after a cattle was recovered from one of the victims. (Representational)Two men caught by villagers for allegedly stealing buffaloes were beaten to death by a mob Wednesday at Bankatti village in Jharkhand’s Godda district. While four men were arrested after the lynching, police said three more suspected cattle thieves managed to flee.

Jharkhand police have registered two FIRs in connection with the incident — for the murder of Murtaza Ansari of Taljhari village and Charku Ansari of Banjhi village and another against unknown people for allegedly stealing buffaloes.

DIG (Dumka) Akhilesh Kumar Jha said: “Four persons have been arrested for their involvement in the incident. The victims had allegedly stolen the buffaloes from a village and were sneaking out when they were caught. Further investigations are on.” He also said that the bodies of the victims were handed over to their families following the post-mortem.

This is the third lynching in the state. While in Latehar two cattle traders were killed and their bodies hanged from a tree in March 2016, a beef trader was lynched by a mob comprising largely of gau rakshaks in June 2017, in Ramgarh district. In the Ramgarh lynching, 11 including a local BJP leader were convicted and handed life sentences for murder in the name of cow protection.

Police said the incident occurred Wednesday morning at Bankatti village on the border of Deodand and Sunder Pahari area in Godda. Extra security forces have been deployed in the area to avoid untoward incidents.

Godda Superintendent of Police Rajiv Ranjan Singh said five men had allegedly stolen nearly a dozen buffaloes. “After stealing the buffaloes, they had managed to reach Bankatti village, about 2-3 km away, when the villagers spotted them. A hue and cry were raised. The villagers from where the buffaloes were stolen and those of Bankatti gathered,’ he said.

“They took back the buffaloes, while three associates of the victims managed to escape. Two men caught by the villagers were beaten up, which led to their deaths.”

Singh also said that four men, including one Munshi Soren, and three others were arrested. “We have registered two cases – one pertaining to the murder, and the other for stealing buffaloes,” he said.

The victims were from a village about 30-40 km from where they were killed, police said, in a region dominated by Santhal tribals. “It has come to light that Charku Ansari had gone to jail in a property offence. One of Murtaza’s brother was also sent to jail in a dacoity case recently. Further antecedents are being verified,” said Singh.