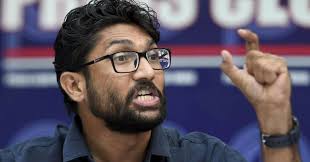 Jignes Mevani said that his team has informed the police that he travels across the nation that there have been a threat to his life on various platforms but the Gujarat police have not taken any action.

New Delhi: Gujarat MLA and Dalit leader Jignesh Mevani yesterday claimed a threat to his life and said that he received a phone call on his number and the caller told him that he would shoot him and kill him. Mevani on Thursday again reiterated the claims and said that he has again received a call from the same number where the caller warned him of consequences.

Mevani today said on Twitter, “Today again, on the same number I received a call from the person who threatened to shoot me. Today, the same man called and threatended – ‘what do you think, we are useless, wait for consequence.'” Mevani yesterday, on Twitter, said that a certain Ranvir Mishra has called on his registered number and his friend and colleague answered the call.

He said that the person on the other end of the call and said that if he was talking to Mevani then he will be shot dead. “7255932433 from This number i have received a call on my number 9724379940 saying he will shoot me. “My colleague Kaushik Parmar(who is having my number these days) just informed me – ” koi Ranvir Mishra ka phone tha aur bola ki tum Jignesh levani ho to tumhe goli mar dunga” (some Ranvir Mishra had called and said ‘if you are Jignesh Mevani, then I will shoot you’), he tweeted.

“Few months ago, in 10-15 districts of Gujarat Dalit groups have submitted memorandums to provide me adequate or ‘Y’ category security. During Una struggle and my election campaigns, ppl attacked my car. Threat calls have been issued on my facebook and twitter. Bt no action is taken (sic),” Mevani said in another tweet.

He also claimed that the Gujarat police is not taking any actions on the complaints filed by him neither giving him protection as “they also want him dead”. He said that his team has informed the police that he travels across the nation that there have been a threat to his life on various platforms but the Gujarat police have not taken any action. “I think Gujarat police wants me to get killed, and for this purpose, they are not providing me protection,” he said.

Mevani’s name was mentioned after the arrests of five Dalit leaders and activists yesterday in the Bhima-Koregaon violence case for allegedly inciting violence by inflammatory and provocative speeches on December 31, 2017, at Elgar Parishad in Pune.