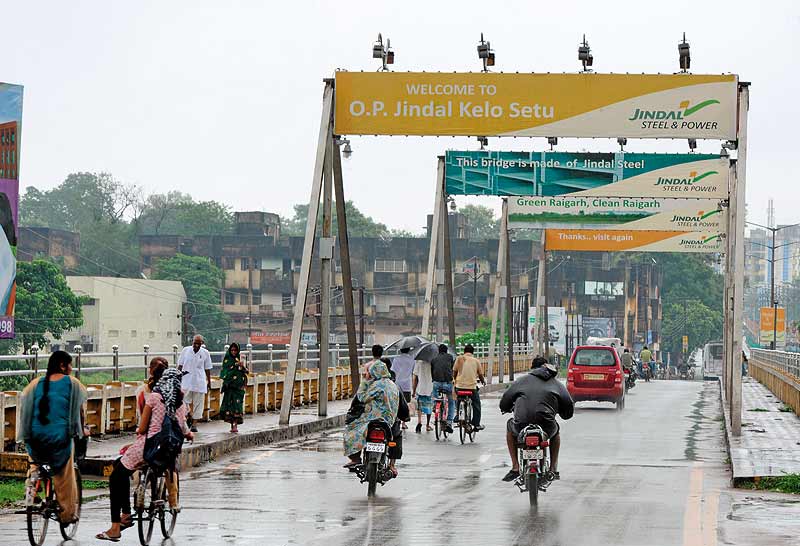 Manic markers? In advertising the O.P. Jindal Setu, built by JSPL over Raigarh’s Kelo river, the firm has perhaps gone over the call of duty.
OUTLOOK MAGAZINE | SEP 24, 2012
Jindalgarh: Jindal All The Way
JSPL’s attempts to alloy itself to Raigarh have met with a steely resolve
Debarshi Dasgupta

Killed in a chopper crash in 2005, industrialist Om Prakash Jindal lives on in Raigarh, the heart of Chhattisgarh’s coal belt—not as Om Prakash, but ‘Omni Present’ Jindal. Visitors here are blitzed by O.P. Jindal’s name as also the green and saffron flag logo of Jindal Steel and Power Ltd (JSPL), which he founded in 1989. Now managed by his son and Congress MP Naveen Jindal, the firm has been on overdrive, stamping its mark across the city. It hasn’t gone uncontested, though.

Whether it is the bridge that JSPL built over the Kelo river, promptly naming it the O.P. Jindal Kelo Setu; the road that it constructed alongside the river called, in keeping with form, the
O.P. Jindal Marine Drive; or the controversial naming of a major city thoroughfare as O.P. Jindal road, none can escape the Jindal patriarch’s reach in the city. Arrivals at the local government hospital are treated in the O.P. Jindal OPD block and residents of the nearby Pathalgaon Bal Ashram received goodies like bags and cots with Jindal stickers on them. The locals here are incessantly reminded of the Jindals’ munificence.

“Naveen Jindal wants to transform Raigarh into Jindalgarh,” says Rajesh Tripathy, a local activist. Subscribers to this view point to how the firm encroached and installed O.P. Jindal’s statue at a public roundabout on the national highway near the city a few years ago without the necessary clearances and despite public opposition. “The National Highway Authority of India told us they had not been granted permission,” adds Tripathy. Finally, the statue was relocated in 2011 to another roundabout on a road that cuts through JSPL’s plant. Jindalgarh also happens to be the name the firm has chosen to confer on a colony of its employees on the fringes of the city.

The obsessive desire to leave a mark and vociferous attempts at claiming credit for every task carried out as part of its corporate social responsibility leave no one in doubt that the Jindals want to make Raigarh synonymous with Jindal. Ajay Athaley, a Raipur-based theatre artiste, says, “Why must they shout to say they have done this or that? The government should instead place a sign saying the firm was bound to do it. They are not doing us a favour if a certain section of the profits goes to the city.” JSPL currently has a CSR budget of Rs 25.73 crore for the whole of Raigarh district; its profits in 2011-12 was Rs 4,002 crore.

In this region of Chhattisgarh, it isn’t photographs of CM Raman Singh that one can’t miss. It’s the pictures of a beatific Naveen Jindal pasted on hoardings across the area. One may be forgiven for thinking it’s some strange dictatorial land with a leader obsessed with propagating a cult of personality about himself. Even the hierarchy on JSPL’s signboards on public roads emphasises its units first, subsuming entire towns that follow the units on the boards.

Jayant Bohidar, local Congress worker and president of the Raigarh Zila Kisan Congress, says Naveen Jindal suffers from a “mania for propagating his family’s name”. Deepak Mishra, a former resident of this city, adds, “He wants the name ‘Jindal’ to be seen everywhere. The people should forget Raigarh. Jindal, Jindal, Jindal, Kahan jaana hai? Jindalgarh.” On the other hand, Hemant Verma, manager at JSPL for liaison and PR, says there is no attempt to make a Jindalgarh of Raigarh. He even suggested the statue was relocated from the highway not because of public pressure. “It was because of a Supreme Court ruling that prohibited it,” he qualifies.

As for the major thoroughfare rechristened O.P. Jindal Marg, few refer to it by its new name. For them, it has always been Laxmipur-Dhimrapur Marg and that looks likely to remain so—at least in Naveen Jindal’s lifetime.