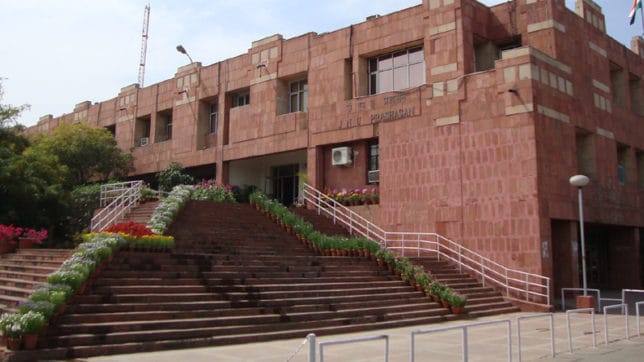 The issue has flared up in universities, with various student organisations staging protests at Arts Faculty, Delhi University against the targeted exclusion of marginalised students.

Delhi: After a plethora of complaints surfacing about discriminatory marking in the interview of PhD courses in Jawaharlal Nehru University, a delegation of the students met the deputy registrar, admissions branch to express their anguish against the way the aspirants were evaluated. The students allege that the university consistently gave low marks to aspirants from Scheduled Castes, Scheduled Tribes and Other Backward Communities.

Aishe Ghosh, president, Jawaharlal Nehru University Students’ Union, in a memorandum to the university said that the union received several testimonials of students with allegations that they were given low marks even when they scored excellent marks in their written papers.

The students maintained that viva marks for admission show a strange distribution with marks clustered either between 0-5 or in the 25-30 range. In most circumstances, it is expected that the average marks fall between 10-20 with very few on extreme ends of the spectrum. It is evident that the interview board is using this bimodal marks distribution to select or reject candidates based on viva-voce alone.

In a press statement, All India Students’ Association said that the 30% viva weightage in itself is a flouting of the 1980 verdict of a 5-judge Constitutional bench in the Ajay Hasia Etc vs. Khalid Mujib Sehravardi & Ors case.

The bench, in its judgment had remarked, “We are of the view that, under the existing circumstances, allocation of more than 15% of the total marks for the oral interview would be arbitrary and unreasonable and would be liable to be struck down as constitutionally invalid.” It added that in 2011, the Supreme Court in a viva related case of ICAR, upheld the validity of this 1980 verdict in yet another judgment. The need of the hour is therefore to institute an admission criterion which is objective and impartial, which is not determined by subjective and ideological biases.

The committee also deliberated upon the report of Thorat Committee which is based on admission data of 2013. The committee had remarked, “The data consistently indicate the pattern of difference in the written and viva voce marks across all social categories which indicates discrimination. It is the considered view of the committee and therefore recommends that the discriminatory pattern would get mitigated if viva marks are reduced from present 30 marks to 15 marks. The university should review the system after three years.”

The issue has flared up in other universities, with students staging protests against the discrimination. Students Federation of India along with other students’ organisations protested at Arts Faculty, Delhi University against the targeted exclusion through PhD viva voce of students from marginalised sections of the society i.e SC/ST/OBC/PWD. The protesters alleged that students from marginalized communities have been marked terribly low in their selection interviews for PhD. It is a violation of the constitutionally mandated reservation policy in JNUEE.

Vikas Gupta said, “The interview process is exclusionary to students from PwD category as well. Therefore, other mechanisms should be adopted to assess students other than interview, as interviews can be highly subjective and laced with prejudice.”

Reflecting on the short duration of interview schedules, Abha Habib, Former EC Member, DU, remarked, “You can’t evaluate a student’s learning and knowledge in 5-10 minutes of an interview. We have different means to access the learning of a student and knowledge in a particular field.”

Jitendra Meena, a teacher at Vivekanand College, commented on how the English language can be a mechanism of exclusion. He said, “Prejudice plays in various methods. The barrier of fluency in English is not an indicator for knowledge about a field. Many able Hindi medium students are pushed out of higher education as a result.”

The meeting at Arts Faculty was presided over by Sumit Kataria, state president of SFI Delhi. He said, “The story of institutional discrimination in JNU has a long history. In 2017, many students from SC/ST and OBC backgrounds, including me, were given 1 or 2 marks in viva voce. SFI had filed a petition in 2017 against various issues where it was informed to the court that the Nafey committee had suggested 15% mark allocation to viva voce. However, the popular demand was 10%. This should be implemented immediately.”