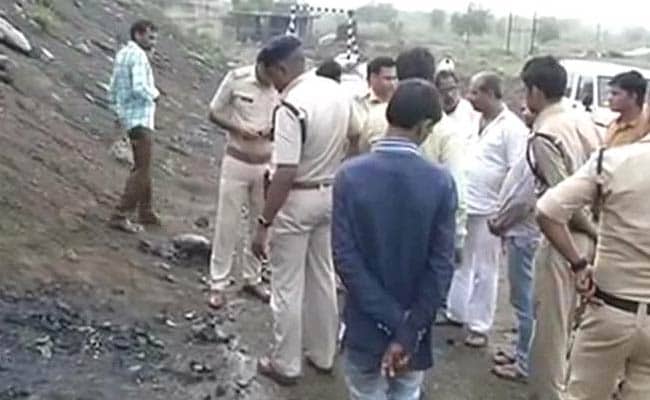 Policemen at the location where the journalist was killed.

BALAGHAT, MADHYA PRADESH:  A journalist was allegedly killed by mining mafia in Madhya Pradesh after he refused to withdraw a case he had filed in court. According to the police, Sandeep Kothari had been kidnapped and set on fire.The burnt body of Mr Kothari was found in Wardha district on Saturday night. He was allegedly abducted from Katangi tehsil in Balaghat district on Friday night.

The police have arrested two persons in connection with the murder — the accused have been identified as Vishal Dandi and Brijesh Duharwal. A third, Rakesh Nasvani, is absconding.All three were from Katangi, were engaged in illegal mining and running chit fund companies, say police sources.

“They are related to manganese mafia… My brother was a good journalist. He exposed many of their corrupt practices,” Naveen Kothari, the brother of Sandeep Kothari, told news agency ANI.

Mr Kothari was abducted on the night of June 19, while going to Umri village in Balaghat. He was travelling on a bike with a friend, but on the way, the bike was hit by a car.

The three abductors, who were in the car, beat up his friend before making off with the journalist.
“He was murdered in the car and his body was set on fire near a railway track,” inspector Sanjay Chaukse told ANI. The body was later dumped at Wardha, around 50 km away.

The 40-year-old was working as a local correspondent for a Jabao abalpur-based Hindi daily. He was allegedly under pressure to withdraw a case of illegal mining that he had filed against some persons at a local court.

Earlier this month, a journalist, Jagender Singh, was allegedly set on fire by policemen during a raid at his house in Shahjahanpur, Uttar Pradesh. He died a week later, on June 8.

Five policemen were suspended but the state minister for horticulture provoked outrage by saying, “There are some incidents that happen in the course of nature and destiny.”