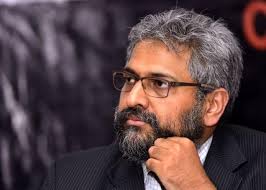 ALLAHABAD: Senior journalist Siddharth Varadarajan along with Allahabad University student union president Richa Singh was held hostage for around half an hour inside the office of AUVC, RL Hangloo when the senior journalist went to meet the VC at his office on Wednesday. This was after ABVP members and office bearers of AU student union started protesting against his entering the varsity campus and forced him to stay inside only to allow his access to leave the campus after intervention of police.

Earlier, Varadarajan was not allowed to address the symposium at Senate hall of the Arts campus as the AU authorities had withdrawn the permission for holding the symposium at the said venue. The permission was withdrawn following the protest by the four office bearers of AU student union who were of the opinion that Varadarajan is pro-naxal and his ideas are anti-nationalist.

Following the denial for the event, Varadarajan spoke Swaraj Bhawan, a venue outside the varsity campus.

However, after addressing around 100 students at the venue, he along with the union president arrived at the VC office to meet him. But, by the time he was meeting Prof Hangloo, large number of ABVP members along with the four office bearers of the student union, arrived at the portico of the VC’s office and started shouting against the senior journalist and the varsity administration.

Because of the unrest and chaos outside the VC’s office, Varadarajan was unable to leave the office of the VC for around half an hour.

Soon police was called in and the varsity proctor too spoke to the agitating members who allowed Varadarajan exit from the campus terming that he should not be given so much of importance. Under security cover by the police, the journalist managed to leave the campus and headed for his meeting with the officials of IIIT-A.

Varadarajan, while speaking to TOI termed the incident as very unfortunate.