Journalists in Hiding : Silencing Women Journalists, is Silencing the Voice of Afghan Women 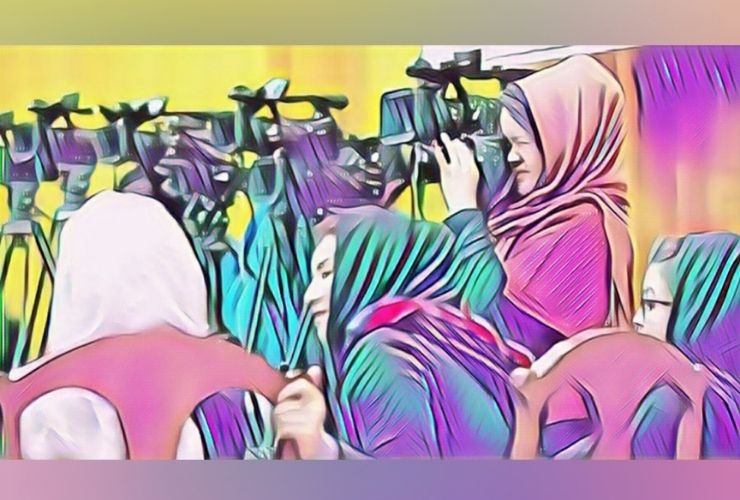 KARACHI, Pakistan, Sep 3 2021 (IPS) – “If I fall into the hands of the Taliban, not only me but my family will be killed,” said AB, 23*, who worked as a broadcast journalist for the past seven years and is a well-known face on the television screen.

Speaking on WhatsApp from her hideout in a city close to the capital Kabul, she said the Taliban came looking for her and were asking about her whereabouts from her neighbours, who, in turn, warned her family.

“The Taliban have started house-to-house search and when they could not find me, left a warning with our neighbours to inform us that they will find me and deal with me accordingly,” said AB. Her life is in double jeopardy – firstly, being a woman writing against the Taliban. Secondly, she belongs to the ethnic Hazara community, whom the new rulers believe are infidels and need to be persecuted.

Her circumstances were confirmed by Kiran Nazish, founder and director of the New York-based Coalition for Women In Journalism (CFWIJ), a worldwide support organisation for female journalists.

“Our sources in Afghanistan have informed the Taliban are carrying out house-to-house searches for people on their hit list,” she said, adding: “Imagine the fear these women are living under in their own country.”

“The Taliban must cease searching the homes of journalists, commit to ending the use of violence against them, and allow them to operate freely and without interference,” said Steven Butler, Asia programme coordinator for the Committee to Protect Journalists.

Because of the grave danger, AB and her family have been in hiding now for the last several weeks.

Like AB, CD*, 26, editor of a weekly publication and a journalist working for a news agency for the past four years, is hiding with her family after her office was ransacked by the Taliban three weeks ago.
If found, she is sure she “will be stoned to death”.

“The world must help me,” she pleaded. “Please email one of the embassies, such as Canada or the United States, and tell them to get me out.”

Her fear of the Taliban was palpable, and she said she could not talk over the phone as they were monitoring the “telecommunications networks”.

Headlines tell of the targeting of women journalists in Afghanistan following the Taliban takeover.

If this continues and they cannot leave their hideouts soon, CD said they might die of “poverty and hunger” even before the Taliban locate them.

“We have no bread to eat at all, and we cannot go out to earn for fear of being discovered,” she said.
The Taliban leadership have said women will have the right to work, seek education and be mobile, but on the condition that it will have to be under Sharia [Islamic law] but have not elaborated what this would entail.

However, they have requested women to stay home as some from the Taliban have not been trained on how to behave with women.

Their proclamation of going soft on women has been met with scepticism by many Afghan women.

“I do not believe them, nor do I trust the Taliban, because they have a bad past,” said CD, adding: “They do not keep their word; women are not safe, and if they go outside, they will be flogged.”

She said she had heard reports of violence on women in other provinces.

“No Afghan woman believes their living condition will be good under the Taliban rule,” CD said. “By silencing the female journalists, the Taliban want to silence the voice of Afghan women.”

She said the Taliban had continued targeting and killing journalists and human rights activists for the last 20 years, even during Ashraf Ghani’s regime. “That is why we are afraid and feel so unsafe,” she emphasised.

“Their [Taliban] interviews are in complete contrast with what they are doing on the ground,” said Kiran.

“Shocking to see the huge effort being put into tracking down people when they [Taliban] should be spending the same in rebuilding the country, putting a government together and finding ways to reassure people that they are safe, especially the Afghan women,” she said in a WhatsApp interview from Vancouver, Canada, where she is currently based. She is working non-stop to help the women journalists find safety.

As soon as Kabul fell into the hands of the Taliban, the media outlets had asked all their women employees to stay home and not report for work. “I was told to stay home till further notice,” said AB.

CD said she could not work as her equipment had been looted when her office was ransacked.

According to a 2020 survey by the Centre for the Protection of Afghan Women Journalists (CPAWJ) and Reporters Without Borders (RSF), more than 1 700 women were working for media outlets in the three provinces of Kabul, Herat, and Balkh.

Kabul had 108 media outlets with a total of 4 940 employees in 2020. They included 1 080 female employees, of whom 700 were journalists. Of these 700 females, only 100 continue work and just a handful work from home in the other two provinces. Of the 510 women who worked for eight of the biggest media outlets and press groups, only 76 (including 39 journalists) are still working.

“…women journalists are in the process of disappearing from the capital,” states the RSF website.

AB said most of the journalists who are still working belong to the international media and are supported by their organisations.

“Local journalists are denied these privileges,” she pointed out. “As a journalist, I cannot continue to report if there are restrictions placed on me.”

“My dreams and aspirations and wishes have been destroyed. The Taliban not only took my city, but they also took my life too.”

Until recently, the young journalist did not have to cover her head at the office, “loved wearing fashionable clothes and wore make-up,” being born and educated in the “era of democracy”.

Today, she feared she might be resigned to shroud herself in the chadri [blue burqa] when venturing out of her home under the new Taliban regime.

“Stripping public media of prominent women news presenters is an ominous sign that Afghanistan’s Taliban rulers have no intention of living up their promise of respecting women’s rights, in the media or elsewhere,” The Guardian quoted CPJ’s Butler. “The Taliban should let women news anchors return to work and allow all journalists to work safely and without interference.”

But even before Afghanistan fell to the Taliban, it was not easy being a female journalist there, said Kiran.

The CFWIJ has been researching 92-countries documenting the threats women journalists face.
“Of the 92 countries we are documenting, Afghanistan has been among the top three where women journalists (among other vulnerable groups) have continued to face serious attacks and harassment from non-state actors, including the Taliban,” said Kiran talking about the findings of the past three years.

Over the last year and a half, the coalition has relocated many female journalists from different parts of Afghanistan and even out of Afghanistan.

It has doubled its efforts in drumming up support to get several hundred women evacuated out of Afghanistan.

“We have evacuated 90 for now from the several hundred women [including journalists, sportswomen, activists and academics] who requested our support. Still, there are 100 super-urgent ones who we fear are on Taliban’s hit lists and are being hunted.”

*Names withheld for their protection.