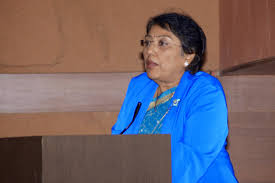 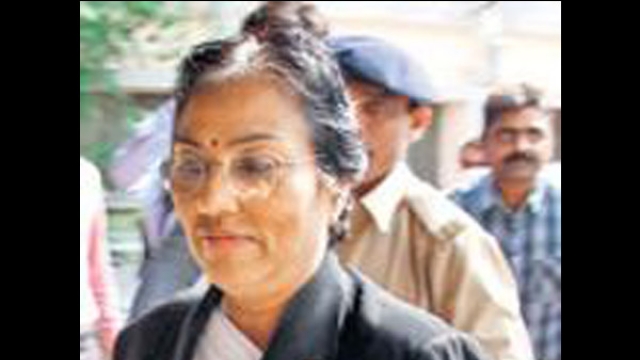 GANDHINAGAR: Irony has many faces. That a former woman  judge, a standardbearer of justice, should fear for her life and that of her family in a state ruled by a woman Chief Minister, is  one of them.

The former judge, Jyotsna Yagnik, who convicted 32 people – including Maya Kodnani, who had been part of Chief Minister Narendra Modi’s cabinet – for the Naroda Patiya massacre of 97 Muslims in Ahmedabad  during the 2002 communal riots is today fearful for the safety of her family.

She is being subjected to mental torture through threatening letters and telephone calls at all times of the day while the Anandiben Patel-led Bharatiya Janata Party government has failed to provide an adequate response. A picture of dignity in the face of great mental strain, Yagnik, known for her unerring judicial instincts even in taxing cases remains unfazed, even defiant. “It was  my duty to inform the authorities about the threats and I have done that. I refuse to beg or grovel before anyone,” she told this correspondent on Wednesday night.

Yagnik who has been a POTA judge as well as heard  such cases as the serial bomb blast case was provided  Z category security in 2012 which was scaled down to Y category in 2014.

Immediately after she began receiving  threatening letters and calls, she sent a confidential letter to the Special Investigation Team (SIT) appointed by the Supreme Court to probe the worst incidents of 2002 enumerating the systematic attempts being made to terrorise her family and her.”I even passed on the telephone numbers from which the [threatening] calls were coming but to no avail. I do not blame the SIT. They are just a forwarding post-office. It is the state government which has to act, and unfortunately, there has been no response,” she pointed out.

It is not as if the former judge has failed to keep the state authorities informed  of the threats.”I had met the Additional Chief Secretary (Home) of the Gujarat government to inform him [about what is going on] but there does not seem to have been any response,” she said.

In August 2012, Yagnik held Kodnani, Babu Bajrangi of the Bajrang Dal and 3o others guilty of the Naroda Patiya massacre. In her judgment and subsequent sentencing orders, Yagnik was scathing about the role of Kodnani:

“[She] has been proved to be the kingpin of the entire communal riot and one of the principal conspirators who has actively instigated the rioters and has abetted them to form unlawful assembly to execute the conspiracy hatched under her leadership with other co-conspirators. ..

“The gruesome and barbaric act of the accused and more particularly those seven accused who have been mentioned herein above, have crossed all limits of inhumanity. Their dastardly acts by killing as many as 96 victims by burning them alive at the site of the Muslim chawls itself is horrifying …

“The submission of [Kodnani, as part of her request for leniency in sentencing] that she is a victim of politics has been pleaded for the first time without any background created in the cross-examination … As a matter of fact, this Court has observed in its judgment that [she] was tremendously favoured by the then investigating agencies. All care, at the cost of the duty of I.O. and even the interest of the victims of crime, was taken to see to it that, the involvement of [Kodnani] does not come on the books. This fact, comes in the way to believe that [Kodnani] was ever a victim of any politics…

“It needs to be noted that at that time, [Kodnani] has played a role of one of the principal conspirators and a kingpin of the communal riot. India is a secular state and such offence by the elected member of the constitutional body needs to be viewed by the Courts very seriously where disharmony, hatred and enmity based on religion was created by instigation and where such commission of the crimes were abetted by A-37…

“The communal hatred displayed by communally surcharged mob on account of instigation of accused like [Kodnani], [Babu Bajrangi] and participation of the remaining … on account of some vested interest who wants division of society on communal bases resulted into the massacre.”

The appeal of Kodnani and other Naroda Patiya convicts is due to be heard by the Gujarat High Court this month.

Yagnik, who now runs the Unitedworld School of Law here, also spoke about the threats she was facing to reporters who had come for  a briefing on a seminar she is organising on Corporate Social Responsibility.

Yagnik mentioned  the recent issue of some convicts approaching High Court judges when their appeals were pending.”If they can approach High Court judges, you can imagine under what pressure a trial court judge [like myself] would have delivered the judgment.”

Recently, Justices M.R. Shah and K.S. Jhaveri of the Gujarat High Court opted out of a hearing after some of those convicted  in the Naroda Patiya case tried to contact them, it is learnt.