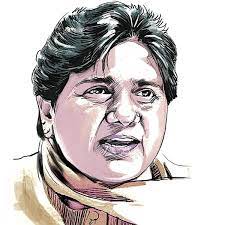 BSP Supremo Mayawati alleges gross misuse of official machinery, money power and violence by the BJP govt in Uttar Pradesh during the election of district panchayat chairperson and now the block heads.

Lucknow: Bahujan Samaj Party (BSP) Supremo Mayawati on Saturday lashed out at Chief Minister Yogi Adityanath-led BJP government in Uttar Pradesh over violence before rural polls in the state and said that homes belonging to Dalits are being destroyed in the Chandauli district.

In a series of tweets, the former Uttar Pradesh chief minister said a jungle raj prevails in Uttar Pradesh under CM Adityanath’s leadership as the state has been witnessing a spate of violence during panchayat polls.

“Even in the present BJP government in UP, there is no law but jungle raj, under which the innumerable violence in the panchayat elections and misbehaviour with a lady of Lakhimpur Kheri is also very shameful. Is this their rule of law and democracy? This is something to think about (sic), she said in a tweet (roughly translated from Hindi).

The BSP chief alleged that the homes of Dalits are being destroyed and questioned why Central ministers belonging to the community are silent on the matter.

“And now like in Azamgarh district, Dalits’ homes are destroyed and oppressed by the oppressors in the Barthara Khurd village of Chandauli district, is this their Dalit love? And the sad thing is that the Dalit ministers of the Central and UP government are still silent, why? This is very thought-provoking (sic),” she said.

On Friday, the Opposition attacked the ruling BJP, accusing it of resorting to violence and disrespecting women ahead of the elections to the posts of the block panchayat chief.

Samajwadi Party president Akhilesh Yadav in a statement charged the BJP with damaging democracy in the state. “First to win the elections of the Zila panchayat chairpersons and now the block chief posts, the BJP has displayed open hooliganism in the entire state,” he had said.

#Goodnews - Dr Soonawala to face trial on rape charges #Vaw
The deaths in Kota bare the light on a healthcare system founded on apathy towards the poor
India - Who Killed Marya?
By using the phrase 'Modi Toadies', writer Salman Rushdie prompts an online storm