‘Just The Tip Of The Iceberg,’ Says Arrested Journalist Amid Sex CD Controversy

Journalist Vinod Verma was arrested from his home in Ghaziabad near Delhi in the early hours on Friday over charges of blackmailing and extortion. He claims that he has a sex CD featuring Chhattisgarh minister Rajesh Munot which, he alleges, has upset the state government which is trying to frame him. 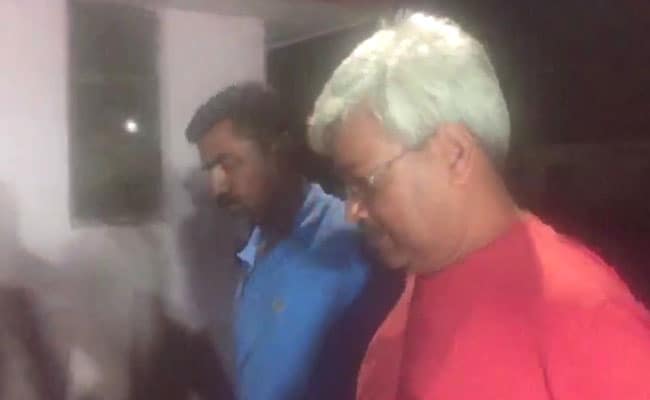 RAIPUR:  As he was hurried into a police station shortly after midnight in Chhattisgarh’s capital Raipur, senior journalist Vinod Verma, arrested for blackmailing a state minister, said, “This is just the tip of the iceberg”.

Mr Verma was arrested by a team from the Chhattisgarh Police from his home in Ghaziabad near Delhi at 3:30 am on Friday over charges of blackmailing and extortion. He claims that he has a sex CD featuring PWD Minister Rajesh Munot which, he alleges, has upset the Chattisgarh government which is trying to frame him.

Mr Munot has called the CD “fake”, and an attempt at character assassination.

The journalist’s dramatic early morning arrest has triggered a political firestorm with the Congress attacking the Raman Singh-led BJP government of curbing the freedom of press. “The way the BJP has reacted to the (sex CD) matter, it is clear that a state government agency cannot probe this issue. It should be investigated by an independent agency under the supervision of the Supreme Court,” Chhattisgarh Congress chief Bhupesh Baghel said at a press conference on Saturday.

Hours later, the government ordered a CBI investigation into the matter. But it has rallied around the minister, denouncing the allegations as a “political and criminal conspiracy”. It claims Vinod Verma is working with the opposition Congress to discredit the state government; the journalist, it says, is related to Mr Baghel who has denied any ties.

The court had granted the police three days’ custody of Mr Verma and had allowed him to be taken to Raipur.

Vinod Verma was part of a fact-finding team of the Editors’ Guild that travelled to Chhattisgarh last year to examine cases of intimidation of journalists.

Holding Up Half the Sky: From the Son Valley to a Cockpit #WomensDay
Why Former Environment Minister Javadekar’s Parting Gift to #UnileverPollutes is Illegal
Telangana: 13 Farmer Suicides In A Single Day
UK: Indian-origin doctor 'sex predator' pleads guilty to 39 sexual offences #Vaw #WTFnews