Justice J. Chelameswar- ‘I Kept Speaking While Others Didn’t’ 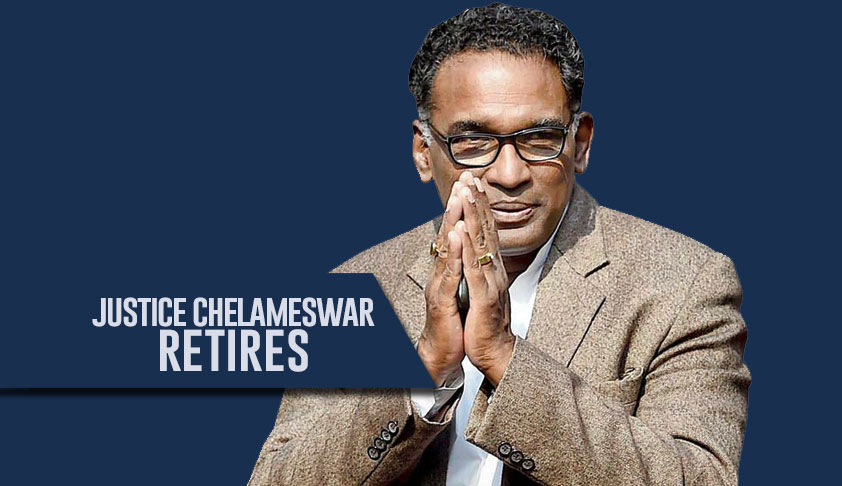 Would like to be known as judge who upheld constitutional values & who loves democracy and liberty, says the ‘dissenter’ SC judge who retired on Friday
Supreme Court Judge Justice Jasti Chelameswar, referred as “a sanyasi in court” by ex-CJI Venkatachalaiah, retired on Friday. The following are excerpts of his exclusive interview to Ajmer Singh:

What do you plan to do now?

I will go back to my village…I will not accept any post-retirement job. As far as judiciary is concerned, I have expressed in my NJAC judgment, that the system is opaque. Opacity is antiquated to democratic governance. Therefore, what I did, I believe, was to bring in more transparency.

Is the higher judiciary getting too politicized? Is it affecting its fairness?

Judges are human beings, not divine creatures. They will certainly be influenced by current events. But by virtue of training, judges are expected to look at problems dispassionately.

Can judges be politically influenced?

It will be dishonest to say judges are not touched by politics. I am not talking party politics. The issue is how dispassionately judges can handle current political events. Once a judge takes the oath to uphold the Constitution, your past connections or inclinations should not weigh in decision-making.

Is there more political pressure now?

No direct pressure, but there are subtle ways of pressuring.

Has it increased in the last few years?

It has always been there. They try subtly, sometimes even crudely. I can’t say it is more or less.

What would be a durable way to move forward on judicial appointments?

When I was confronted with the question, while hearing the NJAC case, I gave an opinion that it’s constitutionally permissible to have this kind of a system.

I can’t object, but who am I to say when the majority declared it unconstitu-

Do you think the MoP (Memorandum of Procedure) or amended MOP can offer a solution?

Where is the MoP? It would improve working of the collegium system. But if both the sides disagree on the content, where’s the solution.

Is it stuck with the government or judiciary?

Any country is run by the government, not judiciary, subject to constitutional checks and balances. It is for the government to decide.

Should the government have a say in judges’ appointment?

How can an elected government be kept away? The question is whether it should have an absolute say. The Constitution says it should not have an absolute say. It says consult the Chief Justice. Now what does consultation mean? It means due weight should be given to me. When the CJI and SC Collegium says a man is good and the government has a different opinion, there must be some objective consideration to determine the truth.

What are your views on the government contention that the judiciary doesn’t take its views on appointments seriously?

That is its opinion. I have given my reasons as to why I don’t agree in the Uttarakhand case (Joseph) or Karnataka case (Bhat). Merely because the government liked my opinion in NJAC case doesn’t mean it can expect me to say yes to whatever it says. When I wrote the NJAC judgment, some people believed I was trying to support the government. If that’s the way one looks at events, there cannot be a serious democratic debate.

In case of a disagreement over appointment of judges, who should have the final say?

The Second Judges Case makes it clear that there are areas where the opinion of the collegium is conclusive like suitability for the job. The government can’t decide that. Now, one can be a brilliant lawyer, but a scoundrel, debauch, undischarged insolvent. On such matters, it’s for the government to take a view.

The law minister has made a statement. I don’t want to enter into that controversy.

Do you apprehend that Justice Gogoi could be superseded?

I don’t apprehend anything. Let’s see what happens. I don’t want to presume or speculate.

Do you think the judiciary has been undermined in the case of Justice Joseph and judge Bhat?

Why don’t you go and ask this question to the law minister? In spite of all campaign against me, I kept on speaking while others didn’t speak. Well, some spoke, some didn’t. I have already put my views on record. Draw your conclusions.

Could you explain your January 12 press conference when you said 20 years later some wise men shouldn’t say judges sold their souls? Is the integrity of the institution intact?

Is the public faith in higher judiciary misplaced?

The trust is not misplaced. I pointed out something that I perceived was not right. That doesn’t mean the institution should be discarded or discredited. On the other hand, if the institution is discredited, democracy is not safe. All my effort was to preserve the institution and strengthen it by creating a greater degree of credibility which can only come through transparent functioning.

A man who loves democracy and liberty; a judge who tried to uphold constitutional values.

What about the Master of Roster controversy? Has the CJI tried to streamline the system?

The four judges did not dispute the fact that in a court which consists of a number of benches, the Chief Justice has the authority to allocate work. The issue is about following a rational pattern. Ultimately CJI’s power is to create a more efficient, transparent functioning of the system.

Is it transparent now?

I don’t know, you tell me is it transparent now? I never asked any Chief Justice to assign any particular case to me, I am not dying for any case…the CJI is most welcome to handle all cases.

Do you think you achieved your objective by going public with your dissent?

Certainly! It achieved its purpose to some extent.

I will answer that question later.

What is the state of judicial corruption in the country?

Justice Verma made a statement; Justice Bharucha made a statement; did anything happen? None of the ‘₹1 crore per day lawyers’ spoke up. They have appeared before all judges whom they condemned subsequently. So, what’s the point talking about it?

I am not disillusioned. I know reality.

Are you then disappointed?

I am not disappointed either. I don’t expect utopia to descend overnight, it’s a long process. But corruption exists. Why was Quddisi arrested? A former judge of a high court was arrested.

Isn’t that a reason to say judiciary should not ‘run’ medical education or even cricket?

I don’t see anything wrong in the judiciary dealing with problems presented before the court, legal problems. If regulations are not implemented strictly in accordance with law, courts are bound to take note of it and make appropriate arrangements for proper regulation of these bodies. But day-to-day management of affairs is certainly not judiciary’s business.

What happened after you wrote letters suggesting a full court meeting?

Nothing happened but they couldn’t ignore what I said. They could have rejected Krishna Bhat’s case. Why did they not? Why do they want formal approval from the collegium?

Did the CJI ever agree to a full-court meeting?

I said convene full court meeting on the judicial side. I wrote a letter on the administrative side because I can’t pass the judicial order.

Are you referring to the Krishna Bhat case?

How did the CJI react to it?

He doesn’t react. I am entitled as a member of the court to my views on the administrative side. Therefore, I put it in writing. It’s for you people to decide who is right.

It appears from the outside, there is a confusion on the role and primacy of the CJI…

I am already on record saying that CJI is first among equals. Nothing more, nothing less.

But a screening process may allow people a fair opportunity, not children and relatives of judges…

It is a fact that some of the children became judges. But my father was not a judge, nobody in the family was a judge. Yet, judges’ children also become judges, question is whether they deserve. Now, if you are promoting somebody who is son or daughter of a judge, you must make sure that person is 10% more efficient than others who are in the zone of consideration. You can’t totally rule out a judge’s son because ultimately the purpose is to get a good candidate.

Is the zone of consideration big enough?

It all depends upon who is doing the exercise, there is nothing like a ‘do it yourself’ manual.

Shouldn’t judiciary have a selection-cum-interview process like every institution?

Interview process is not suitable for everything. I’m all for a system where judges to constitutional courts are subjected to a scrutiny by a public body.