Kaneez Surka Accuses Aditi Mittal of Forcefully Kissing Her; She Says ‘I’m Sorry, It Was a Joke’

In a long post on Twitter, Kaneez alleged that Aditi, who has been actively backing women’s voices in the wake of the MeToo movement, forcefully kissed her on the mouth.

My Boy Will Die Without Your Help – Don’t Be Indifferent!
Masala Tea Free Trial: Clinically Proven Ingredient
Stand-up comedian Kaneez Surka has accused fellow colleague and popular comic Aditi Mittal of sexually harassing her when the former was hosting a show at Mumbai’s Andheri Base in 2016. Hours later, Aditi wrote an apology while justifying the act as a “joke”.

In a long post on Twitter, Kaneez alleged that Aditi, who has been actively backing women’s voices in the wake of the MeToo movement, forcefully kissed her on the mouth.

“I need to tell my story as it happened to me. Two years ago, at a comedy show I was hosting at Andheri Base, in the presence of an audience of 100 and many comedians, Aditi Mittal walked up on stage and forcefully kissed me on my mouth out of the blue and put her tongue in my mouth, while I was still on stage and without my consent,” Kaneez wrote.

She continued, “It left me humiliated, shocked and completely stripped of choice. Every person is entitled to choice and boundaries and she violated mine. While I mustered the courage to reach out to her a year ago, she first apologised but soon turned hostile towards me, leaving me confused and hurt.” 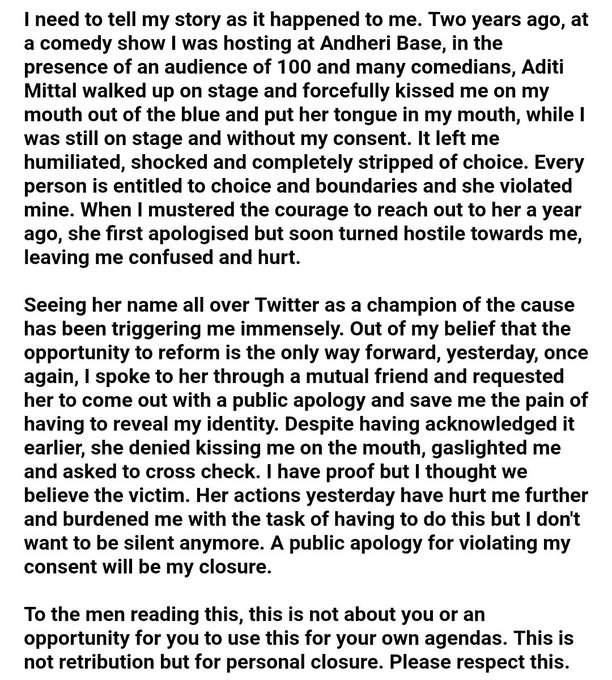 Kaneez further said, “Seeing her name all over Twitter as a champion of the cause has been triggering me immensely. Out of my belief that the opportunity to reform is the only way forward, yesterday, once again, I spoke to her through a mutual friend and requested her to come out with a public apology and save me the pain of having to reveal my identity.”

Kaneez also said that when she had finally mustered the courage and reached out to Aditi last year to talk about the incident, the latter “first apologised” but soon “turned hostile.”

Kaneez demanded a public apology from Aditi for violating her consent.

Soon, Aditi took to Twitter to say that it was “a peck on the lips (there was no tongue) as a joke as a part of the act”. She added that the two had discussed the matter earlier and sorted it out, but since Kaneez is asking for a public apology, she will oblige.

Aditi ended the post with “Kaneez, I am sorry”

Why Modi is so desperate to own the constitution, and Ambedkar
Orissa journalists lodge FIR against BJD MP and MLA over attempts to bribe them
Banished for menstruating: the Indian women isolated while they bleed #Vaw
After one year Chhattisgarh Sterilisation Deaths Re-visited #Vaw