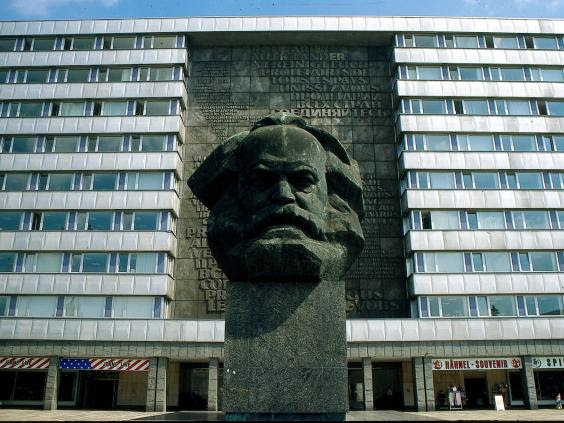 A monument to Karl Marx in the German city Chemnitz, formerly Karl-Marx-Stadt (Getty)

To villify you need to be foul mouthed, to understand you need knowledge and intelligence

My Facebook friend, the well known journalist Vidyadhar Date recently posted a more anguished than outraged comment about a fellow called Sanjeev Sanyal, an Economic Advisor in the Ministry of Finance, who described Karl Marx as “an evil thinker and inventor of a blood thirsty religion”. Date further reported that “he went on and on in his diatribe. In terms of language it was seen by many as a shocking performance for an academic”.

Date is wrong. This fellow is not an academic. He is a merchant banker, glib and cocky. Sanyal is a self opinionated fellow, more cocky than his modest academic attainments justify.He was speaking at the Tata Literature Festival yesterday in Bombay, a perfect platform for such views.

Karl Marx is more villified than understood. To villify you just need to be foul mouthed. To understand requires knowledge and intelligence. There is plenty of the former in the present dispensation and little of the latter.

The world just celebrated the 200th birth anniversary of Karl Marx. Marx defies description or labeling. He was a philosopher, economist, historian, political theorist, sociologist, journalist and a revolutionary socialist. Being great in any one discipline or vocation is in itself a great achievement. Clearly Marx was a man of many achievements. The history of the world changed due to Marx and he must not be judged by what followed in his name.

Fifty years ago, when the burden of the world’s problems were heavy on my shoulders, I visited Karl Marx’s grave at Highgate cemetery at Hampstead in London and laid a rose. As the Nobel Laureate Bob Dylan wrote: “Oh! I was so much older then, I am younger than that now!” Like to many others, Marxism was a pre-analytic cognitive vision. However that vision, like many others, did not stand the test of time and the rigors of objective analysis.

The Highgate monument was unveiled in 1956, almost 73 years after he died. The monument is located on a slope and when viewed in profile it appears he is looking forward. It is a larger than life bronze lion like head that stares ahead with a mane of hair and a bushy beard that it looks like a face peering out of hair.

The figure is cut off just below the shoulders by a ten-foot plinth of polished granite. At the top of the plinth, in gold lettering, is the inscription, “Workers of All Lands Unite”; below that is the with the famous quotation from Marx’s reflections on the philosopher Feuerbach – “Philosophers have only interpreted the world in various ways. The point, however, is to change it.” And change it he did.

Sitting in distant London, and immersed in study at the British Museum, Karl Marx analyzed the condition of India, totally under the jackboot of British colonialism: “The profound hypocrisy and inherent barbarism of bourgeois civilization lies unveiled before our eyes, turning from its home, where it assumes respectable forms, to the colonies, where it goes naked. They are the defenders of property, but did any revolutionary party ever originate agrarian revolutions like those in Bengal, in Madras, and in Bombay? Did they not, in India, to borrow an expression of that great robber, Lord Clive himself, resort to atrocious extortion, when simple corruption could not keep pace with their rapacity?

While they prated in Europe about the inviolable sanctity of the national debt, did they not confiscate in India the dividends of the rajahs, 171 who had invested their private savings in the Company’s own funds? While they combatted the French revolution under the pretext of defending “our holy religion,” did they not forbid, at the same time, Christianity to be propagated in India, and did they not, in order to make money out of the pilgrims streaming to the temples of Orissa and Bengal, take up the trade in the murder and prostitution perpetrated in the temple of juggernaut? These are the men of “Property, Order, Family, and Religion.” Has India changed very much since then?

Marx is famous for his major life’s work—“Das Kapital and the Theories of Surplus Value”, which discussed the theoreticians of political economy such as Adam Smith, John Stuart Mill and David Ricardo. Marx was able to write and publish only the first volume; his friend and associate, Friedrich Engels, completed the trilogy from his copious notes.

There is an irony in this great partnership for without Engels there may not have been a “Das Kapital”? Engels was the son of a wealthy German cotton textile mill owner and that capital stood the pair in good stead. There is a certain denseness about these three volumes that makes one wonder if very many self-professed Marxists have even read them, let alone understood them? Maybe Prakash Karat did and does?

Not very long ago, speaking at a gathering to mark 40th anniversary of Deng Xiaoping’s historic slew of economic reforms in China, I made a rather presumptive and trite comment that Marxism was dead as a dodo. I was wrong. It is Leninism and Maoism that are near dead. Marxism is still very much relevant for the interpretation of the world around us. The egalitarian concerns of Marxism and its innate humanism are still very valid. It is a prism through which we can even now clearly see and understand the world’s condition.

What has failed is Leninism, and its distortion of Marxism, and the arrogation of power by a supremely conceited and power hungry elite who could justify any means and any cruelty to serve their narrow ends. The derivation of Leninism as Maoism is even a greater distortion of Marxism and Leninism.

Marx saw the distortions and inequity in society and wondered why? He came up with explanations. His prescriptions were limited by the knowledge and evidence available to him then. The world has moved on and moved very far since then. Technology and the structure of modern society have changed far too much for even Marx to contemplate. He lived in a simpler time when farmers tilled with animal drawn ploughs and even electricity was not even a glimmer. But the analytical discipline he has bequeathed to us is still relevant. But it is the prescriptions of our friends Vladimir Ilyich Ulyanov alias Lenin and Mao Zedong that we need to forget.

Caste Conflicts - Fear and loathing in Periyar land
For Pharma MNCs, India is Heaven for Clinical Trials but Hell for the Country-" Supreme Court
The Sons of Men - #delhigangrape #vaw #mustread
State Demons in Forests of Bastar #chhattisgarh