For days, the picture of Madhuri Bolar along with her friends – one of them a Muslim – has been making rounds on certain WhatsApp groups.

The right wing vigilantes in Dakshina Kannada are keeping busy, and their latest targets are two student leaders – a Muslim man and a Hindu woman. The vigilantes are circulating WhatsApp messages of the two young people, ‘warning’ the man – Hamza Kinya – against ‘roaming around on bike with our Hindu girls in broad daylight.’

But this time, the vigilantes have bitten off more than they can chew. On Tuesday, the 20-year-old woman – Madhuri Bolar – filed a complaint at the cyber crime cell of Mangaluru city police.

For days, the picture of Madhuri Bolar along with her friends – one of them a Muslim – has been making rounds on certain WhatsApp groups. The picture was accompanied by a message in Kannada: “Hanma Kinya is roaming around on bike with our Hindu girls in broad daylight… If he is further seen roaming around with Hindu girls, Hindu organisations must reply to him (act on him.)” 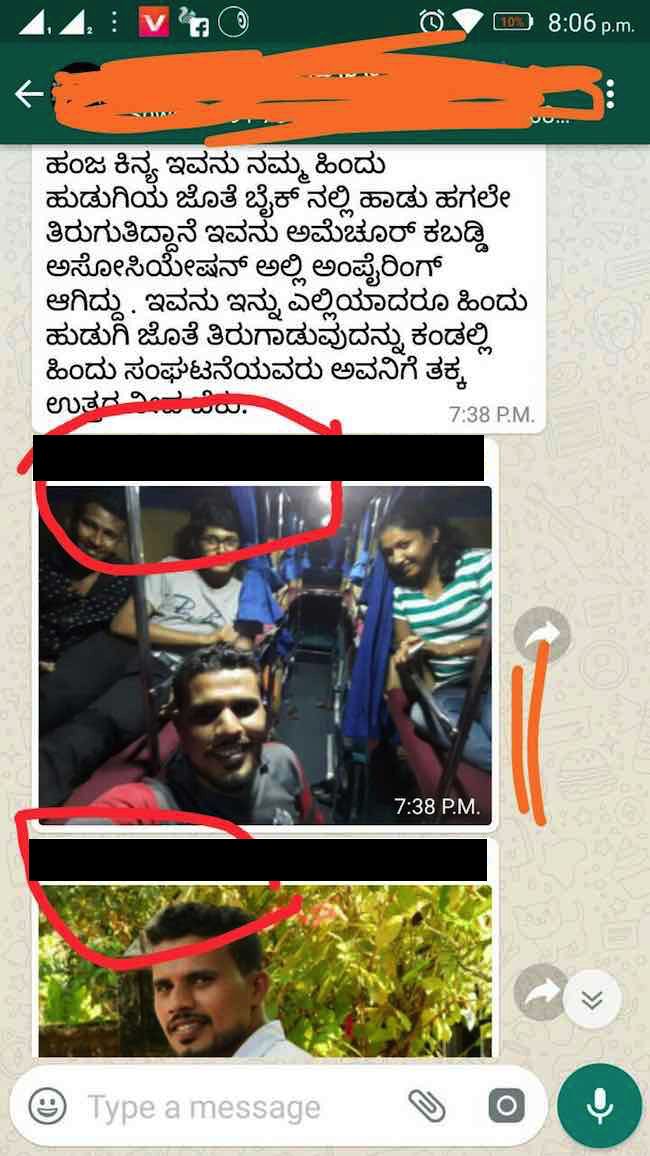 According to Madhuri, both the image and message were out of context, and it came to her as a rude shock. “The selfie was taken almost a year ago, when all of us were travelling in a bus to a camp. It was uploaded by one of my friends. However, the rumour mongers did not mention that; neither did they mention that along with Hamza and me, there were Suhas Adiga and Ganesh Bolar as well in the photo,” Madhuri, who is also the District Secretary of Student Federation of India (SFI) said.

Madhuri further added that as Hamza was the Joint Secretary of district SFI, he was required to travel to such camps with other office bearers including herself.

“Since their (vigilante groups’) other tactics and smear campaign have failed to have their effect on us, they are now trying to bring us down morally by levelling such baseless allegations,” she said.

Not to be bogged-down by her harassers, Madhuri along with her mother Bharati Bolar, filed a complaint at the Mangaluru Police Commissionerate. In her complaint, Madhuri has identified at least six-WhatsApp groups and their users, and has named two men and one woman, who were  allegedly spreading misinformation and causing her psychological trauma.

Speaking to TNM, Madhuri’s mother Bharati Bolar said that, as it is, teenagers in Dakshina Kannada are constantly harassed by religious vigilante groups. “On Sunday, a young girl at Mudigere even committed suicide after she was harassed by vigilantes for talking to men outside her religion. This should stop. I will support my daughter in her complaint and have insisted that the police act against the perpetrators,” Bharati said.

A member of the CPI (M)-affiliated Beedi workers’ organisation, Bharati also said that parents must stand by their children if they are victims of such harassment.

Police Commissioner TR Suresh, who heard the mother and daughter duo, forwarded the complaint to the city’s cyber crime branch. It is learnt that the case has been registered at Pandeshwara Police station limits.

In Dakshina Kannada, that is still reeling from the brutal murders of Deepak Rao and Abdul Basheer by communal elements, the religious vigilantes have stepped up their ‘policing’ efforts. Last week, a minor girl was targeted at the district administration run Pilikula Nisargadhama, after she was spotted in a picnic group that included a boy from another religion.

1984 anti-Sikh riots: Delhi High Court grants bail to convict Bhagmal Singh on medical grounds
India - Mentally ill and tied up, this girl does not exist for the Gujarat state #Vaw
Police investigation into Maruti violence case is shoddy
Protestors claiming to be Shiv Sena workers shut down over 500 meat shops for Navratri