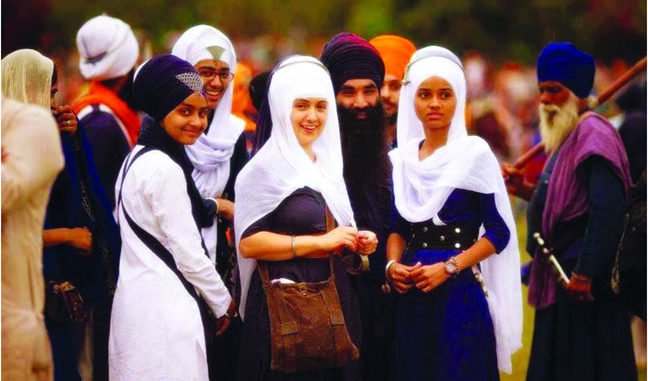 BENGALURU/JALANDHAR: Amid the fierce debate over allowing hijab in colleges in Karnataka, a 17-year-old Amritdhari (baptised) Sikh girl was asked by her college to remove her turban as the college has a uniform dress code and it has to follow the February 10 interim order of the Karnataka high court restraining students from “wearing saffron shawls, hijab and religious flags or the like in classrooms of colleges which have prescribed a uniform”.
The girl’s family, while insisting that the college never discriminated and has always been very considerate and polite, said the Karnataka government and the high court have to clarify on the matter and issue instructions.
The student of Mount Carmel PU College, Bengaluru, who is also the president of the students’ association, was politely asked to remove her turban for the first time on February 16 to which she refused. The college later spoke to her father stating they understood the importance of the turban for a Sikh but were bound by the high court order.
“We have had no issues with the girl wearing the turban so far. When the college reopened on February 16, we informed all students about the high court order and we went on with our normal activities. On Tuesday, when deputy director of pre-university education (north) visited the college, he found a group of girls in hijab and told them to come to the office and told them about the high court order. These girls have been demanding now that no girls should be allowed to wear their religious symbols and therefore the Sikh girl also should not be allowed to wear the turban. We spoke to the girl’s father and later mailed him. We informed them about the order and told them to abide by it. The father responded that it (the turban) is an integral part of their life. We did not want to interfere, but the other girls have been insisting on uniformity and hence we sent the mail,” a Mount Carmel PU College spokesperson said.
“We never sent them out or are forcing anybody, we are just telling them that we need uniformity in the four walls of the classrooms as per the HC order. In our letter to the father, we have specifically mentioned that we believe in an inclusive society and respect all religious practices. According to the vision and mission of the college, we follow inter-religious harmony and have an active inter-religious association,” the college said.
Asked about the issue, deputy director of pre-university education (north) G Sriram said: “The HC order does not say anything about turbans. We should not be dragging in more issues now. We have to only follow the high court order. When I asked the principal, she said the girls are convinced and there are no issues in the college now.”
The girl’s father, Gurcharan Singh, who works at a senior level in a major IT company and has been living in Karnataka for the past 17 years, said he told the college authorities she would not remove her turban.
“She has never faced any discrimination in the college till now. Now also they seem to be caught in a piquant situation while responding to the high court order,” he told TOI.
He wrote to the college that the high court order did not mention anything about ‘Sikh turban’ and it should not be misunderstood. “However, I am also in touch with our community advocates and various organisations,” he said, urging the authorities to allow his daughter with her turban to attend classes. After the latest interaction with college authorities, Gurcharan Singh has approached senior advocate HS Phoolka and sought his opinion.
“I am sending my opinion to him that neither the HC order nor the government order bars Sikh turban,” said Phoolka, when contacted by TOI on Wednesday evening.
Gurcharan Singh has apprised Jeetendra Singh, administrator of Sri Guru Singh Sabha, Ulsoor, Bengaluru, about the issue.
“Asking a Sikh to remove his/her turban is a big insult to a Sikh and the entire Sikh community. We also stand by those Muslim girls/women who want to cover their head with scarf/dupatta as a part of their faith and request authorities to allow them to do so as it was already practised in our country and it does not cause any trouble to other people. The colour of the scarf and dastaar (turban) can match the uniform of the institution,” he wrote.