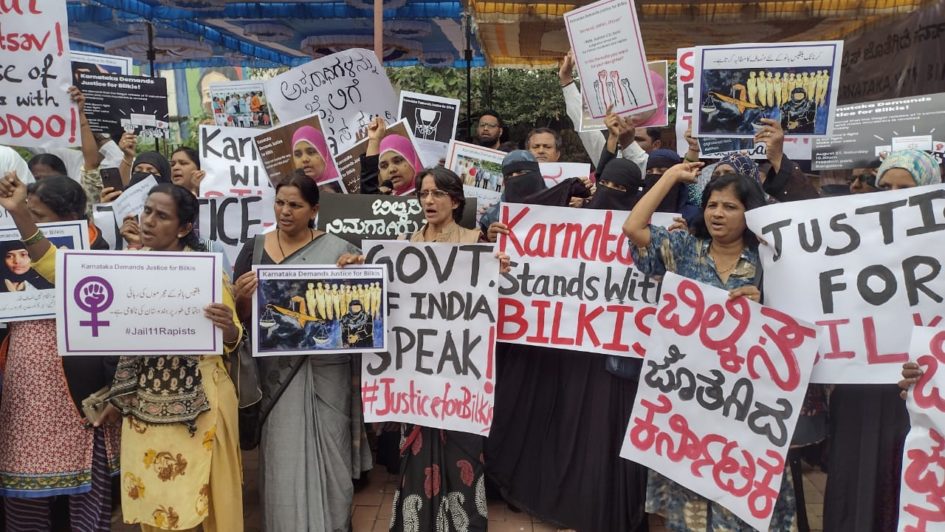 Several concerned citizens from various walks of life including women’s organizations, workers unions, student unions, lawyers, artists and others from various parts of Karnataka had given a call as part of the national protest demanding justice for Bilkis Bano. In over 15 districts of Karnataka, including Bengaluru, protests have taken place where concerned citizens came together in pain and rage to condemn, in strongest possible words, the remission of sentence and release of the 11 convicts. These 11 convicts were serving a life sentence for the brutal and barbaric gangrape of Bilkis Bano and several other women of her family along with murder of her family members, including her 3 year old daughter during the communal riots in Gujarat in 2002.

In Bengaluru, over 1000 people gathered at Freedom Park to express their rage and to condemn the remission of sentence demanding that the same be invalidated and they be immediately sent back to prison to continue their full life term.

Several activists spoke at the gathering today. Writer Mamta Sagar condemned how the government is using women’s bodies to score political points. K.S. Vimala of AIDWA spoke of the manner in which institutions be been failing women right from the Mathura gang-rape case to Bilkis. She said communal speeches of the right wing are like molten lead poured into our ears. Rapists were welcomed back as war-heroes, was this why the government released them? Nandini, an Activist from Slum Mahila Sanghatane said that this remission again shows how we have not yet received social independence. She spoke of how in the Manu Smriti , it is said that Brahmins should not be punished even if they commit the most heinous of crimes. She asked if this was the policy being followed by the Gujarat government, as one of the BJP MLAs , who was a member of the committee mentioned that the convicts were Brahmins and men of good sanskar. She stressed on how we will receive real independence only if we combat communalism and annihilate caste.

Writer and theatre activist K. Ramaiah said that the doors of justice remain open because people have gathered in protest and asked the gathering to continue the protests till justice is received.

Writer Aakar Patel said that protests are a crucial part of democracy. He said that its time for concerned individuals and organisations to come together to fight for fascism. Ms.Sajida Unnisa from AASRA asked the gathering to think of the pain Bilkis must be going through after twenty years of fighting for justice. She said that we must continue to fight till justice is served for every woman. Speakers including noted writer Dr.Shariefa highlighted how society treats rapes on the basis of community and religion. In Priyanka Reddy’s case, the rapists were killed because they were Dalit. Here because Bilkis is Muslim, rapists are released. She also spoke of how there is a deliberate attempt to erase the contributions of Muslims from the freedom movement, to erase the fact that Gujarat riots took place.

The point about how Amritamahotsava was actually used to spread poisonous hate was brought out by activist Akkai Padmashali. She said that the poor response from larger society to this appalling release indicates a decay in the moral fabric of society.

Dr K. Mohanraj , State Convenor, Dalit Sangharsha Samiti attacked the government for poisoning the society on the lines of religion and caste when we had serious problems like unemployment facing the country. The Dalit community stands strongly with Bilkis he said. Student organisation representatives questioned whether this is the ‘Gujarat Model’ that we have to proud of and said that by protecting those convicted, the government of Gujarat has betrayed the constitution. Chandramma of Savitri Bai Phule Mahila Sanghatane said that their organisation along with Slum Janandolana Karnataka is conducting protests in 18 districts and they will unitedly fight till the rapists go back to jail.

At the gathering, theatre activists had organised a message corner, where people could send their messages to Bilkis. Here are some of the messages –

“This is a religion based crime, don’t you dare say its only gendered”

“I do not want to be ashamed of my Bharath”

“Bilkis, you are not alone “  was mentioned by several of those who wrote the messages

At the gathering, a demand letter to the governor was circulated (attached ) and a few hundred people endorsed the memorandum. The Letter of Protest highlights how the remission is illegal, contrary to law and violates the constitutional guarantee of equality and must be immediately withdrawn. The letter demanded security for Bilkis Bano and her family who are living under threat. The letter also demanded that the remission be withdrawn. The programme ended with a resolve to continue to protest till the remission is invalidated and the convicts are sent back to jail to complete their life-term.