Kashmir and the Virtual War #Censorship

As yet another social media ban hits the Valley, HT meets young men and women who, despite the risk involved, film protests and upload the videos to tell their version of the Kashmir story

In a move that has historically failed to quell protests and check mobilisation of the youth in Jammu & Kashmir, the state government on Wednesday banned 22 social networking sites. Since 2012, the state government has interrupted web services 29 times but there is no evidence to suggest that such crackdowns succeed in scaling down protests. The current round of online censorship comes in the wake of what is described as ‘video wars’– a series of videos juxtaposing two realities of Kashmir: the local population’s opposition to the armed forces, and human rights violations by the security personnel. 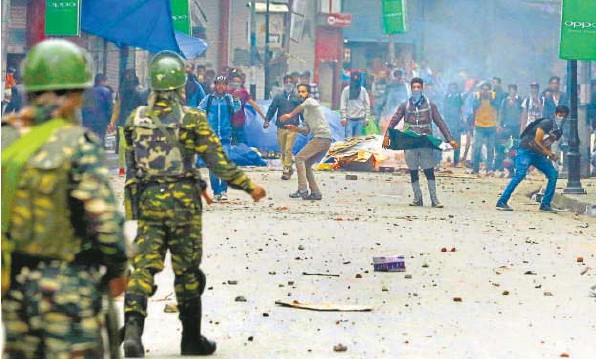 WASEEM ANDRABI/HT PHOTOSCRPF men and civilians during clashes in the vicinity of Lal Chowk in Srinagar on Monday.These videos stormed the internet after the by-election for the Srinagar parliamentary seat on April 9, which witnessed eight killings and seven per cent voter turnout.

In one of the videos, local men can be seen heckling a CRPF jawan returning from election duty. The video became viral and triggered primetime debates on news channels. Another video shows a Kashmiri man tied to the bonnet of a military jeep as a human shield. In a third video, security personnel can be seen firing from close range on a boy, part of a group of young protesters throwing stones.

Amateur videos shot from mobile phones first emerged in the Valley during the 2010 unrest. First among these videos was that of four naked Kashmiri men being escorted by security personnel. It triggered widespread outrage, particularly among the youth, who, by then, had formed online communities for political discourse and protests.

It was their way to vent their anger in the wake of curfew and strikes, which continued for more than four months. “These are children of conflict,” said Sheikh Mushtaq, senior journalist and former Srinagar bureau chief of Reuters. “Most of them were born in the 1990s when militancy broke out or after that. They have created their own ways of telling people what is happening here.”

In spite of frequent internet shutdowns, the number of youth who resort to social media to tell their stories of Kashmir has increased manifold since the 2010 uprising. At the time of writing, the ban was only partially implemented and many social media users could access these sites.

DOCUMENTING UNREST IN THE VALLEY

Within hours of the J&K government ordering a ban on 21 social networking sites and apps in the Valley, Muhammad Faysal, a political blogger in Srinagar, tweeted, “A screenshot of a mobile screen of a Kashmir activist after the social media ban.” The accompanying picture carried icons of VPN (virtual private networks), which would enable the use of apps despite the ban. “In the past such bans have not worked. This time also, people here will find alternatives,” he said. 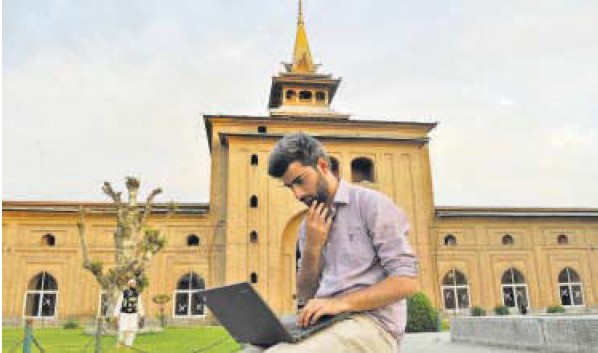 Faysal is one of the earliest proponents of recording unrest in Kashmir, online. He is founder member of the voluntary group that runs the site lostkashmirihistory.com. Apart from latest data on killings, disappearances, torture, and rape cases, the site is a repository of news articles, blogs and PDF copies of more than 100 books on Kashmir. In his free time, Faysal tweets on politics, the internet crackdown in Kashmir and films clashes.

“Kashmiris like me are fighting the news blackout through such videos. The amateur video is evidence with which we can make ourselves heard globally without approaching any media outlet,” said Faysal. “Secondly, it challenges the state’s narrative of Kashmir. This is the narrative of people, and not of any political party,” he added.

Faysal said while media reports say that young citizens of Kashmir have recently started capturing clashes and encounters on their phones, the trend goes back to 2008 when markets across Kashmir got flooded with cheap smartphones. The following year, the Shopian rapes and murders took place. People widely shared pictures through bluetooth. That was the phase when the mobile phone emerged as a source of images in Kashmir. “Pictures of mutilated corpses and bullet-ridden faces of civilians including minors started travelling to remote corners of the Valley. These pictures had shock value,” he said.

Between 2008 and 2010, Faysal filmed many protests and clashes across Kashmir. He remembers that people were apprehensive of getting clicked because of the fear of being persecuted by the authorities. “Once I saw kids playing in a street in Nawatta area and started taking their pictures. They stopped me saying that they would be arrested,” he said.

When, in the summer of 2010, 17-yearold student Tufail Mattoo was killed by a tear gas shell, Faysal became part of a loose online group, which campaigned for a fair investigation in the case. “The online space turned political after that tragedy and has remained so since then,” said Faysal.

THE BOY FROM CHADOORA

Moin Bilal’s eyes were wet. He appeared older for his age, 17 years. He looked away as he recounted the events of March 28. “Even if God himself had come down, I would have done what I did,” said the class 10 student of the Chadoora area in Srinagar’s Budgam district. 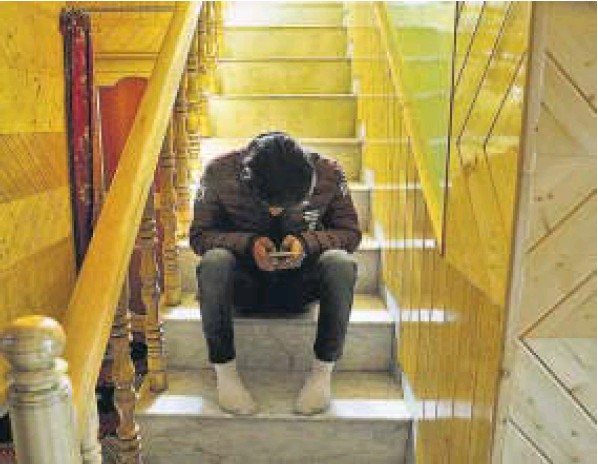 That evening, Bilal was one of four people in the ambulance carrying the dead body of his cousin Zahid Rashid. The 22-year-old who loved exploring the Valley on his KTM Duke bike and taking pictures on his Nikon DSLR, died of gunfire while witnessing the encounter between the armed forces and the Hizbul Mujahideen commander Tawsif Magray in Chadoora.

On the way back from SMHS hospital in Srinagar to Chadoora, the cops stopped the ambulance at Jahangir Chowk, a busy intersection in the heart of the city, saying that Rashid’s corpse reaching Chadoora might lead to disturbances. Bilal stepped out and started live streaming what was happening through Facebook. “Asalaamualaikum mera bhai shaheed ho gaya hai. Aap dekh rahe hain Kashmir mein kitna zulm chal raha hai. Hum azadi chahte hain. Ambulance kee chaabi lee inhone,” Bilal can be seen screaming in the video that went viral.

Bilal doesn’t log into his Facebook account frequently. He doesn’t have a page on the social networking site. Nor is he part of online communities and groups. One day, he came across Facebook live footage of his friends enjoying a snowfall in the Valley. He tested the feature himself.

The second time he pressed the live button was when he got out of the ambulance. “I wanted to expose the cops. I wanted the world to know what we face on a day-to-day basis. Had I not broadcast it live, would you have believed that the police actually stopped an ambulance?” asked Bilal, whose smartphone was with the police at the time of this interview.

He is upset with the discriminatory way the authorities deal with video footage uploaded by locals. “When cops shoot a video, it is considered alright. But when local boys post something, the police arrests them,” he said, adding that he would not be surprised to find that the police had registered a case against him. “They can do anything to curb our voice. I want to know what my crime is. I was not pelting stones. I was not protesting. I only filmed what I experienced,” he said.

Zahid’s sister who chose to remain anonymous said that the impact of social media was evident. “Having seen videos of torture and humiliation by the Indian Army and the J&K police, people here feel a sense of unity like never before.

THE POET WHO POSTS ABOUT PROTEST

Zabirah Fazili, a 21-year-old English graduate from Women’s College, Srinagar, protests online as much as she joins her friends on the streets in solidarity. “Some of us pelt stones to protest. I protest by sharing videos of atrocities on Kashmiris and by writing poems which I share online through my Facebook account,” she said.

Fazili belongs to the growing tribe of young citizens of Kashmir who find solace in writing and meeting likeminded people online and offline.

Her Facebook timeline chronicles the internet shutdowns in the Valley and her thoughts on the issue.

“While they ban the internet, I write articles, poems and essays to keep a record of all the brutalities. Let the world know,” read one of her posts.

She shared the thoughts of one of her friends ,which read, “Some people use Internet. Others are born Kashmiris.”

On the evening of April 26, Fazili posted, “Whenever I will have something on my mind, I will call my friends in India and ask them to post on my behalf.”

For her, the web is a medium to post her thoughts, mark her resistance to the prevailing situation in the Valley and project the complete picture, which, she said, is often missing in the narrative of the mainstream media. “Through newspapers and channels, you get to see one side of the story. We show the other side using social media. Let the world watch and decide,” she said.

Fazili believes that banning internet services and social networking sites in the Valley with the aim of checking mobilisation of protesters is a futile exercise. “Four days ago, the police entered the campus of Government Degree College, Pulwama, to reign in protesters. It is a co-ed college and many girls got injured. Consequently, college girls in Srinagar were out on the streets to protest. The internet ban was still in place. It could not stop the girls,” she said.

Recalling the internet shutdown that lasted for around four months after the killing of militant commander Burhan Wani in July last year, she said, “The movement sustained for six long months in spite of no internet. Curbing the internet is not a solution to this issue,” she said.

Fazili is aware of the government’s crackdown on social networking sites, particularly those running WhatsApp groups and avoids joining digital communities. “There is a constant fear of being watched over by the government agencies. There are people in communities to leak information to the government,” she said.http://paper.hindustantimes.com/epaper/viewer.aspx