Kashmir and Una Define a New Practice of Politics

Protests in Kashmir and Gujarat bring us a new turn in status quo politics – but the costs on the road to change have been far, far too high. 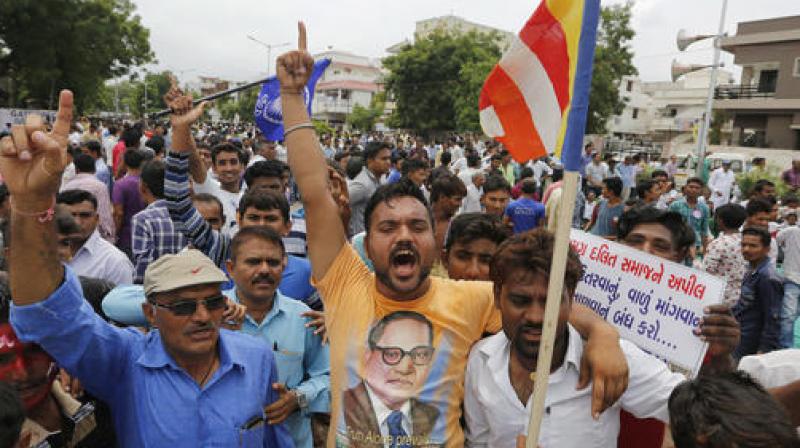 July 2016 has been a month of turmoil all over India. As we move into the month of azaadi, some thoughts on where we are today.

The hunting down of Burhan Wani and the unforgiveable killing and maiming of unarmed protestors in Kashmir that followed has been the tipping point in Kashmir’s tolerance and utter patience with a persistently violent Indian state. As I read report after painful report of the profound trauma unleashed on the Kashmiri people, I was reminded of the moving testimonies and stories of lives told by Iffat Fatima in her film Khoon Diy Baarav – too much bloodshed, too much pain and injustice beyond repair or even comprehension. What else does one say but that the government has committed a grave wrong against an entire people – and we wait and watch, and say in words and through silence, what simply makes so little meaning any more. The utter pointlessness of writing an article on Kashmir – and yet, we must write and respond in the best or the only way that we can and put our strengths behind the people and their indomitable courage.

I am reminded of an inane question a viewer asked Iffat when we screened her film in the Council for Social Development, Hyderabad, last December, “It is very good that you have travelled so far out to talk to so many people. But what is missing in your film is the voice of army personnel. Did you attempt to talk to any of them? You show the outposts from a distance.” She simply answered “no”. But I was angry that it was even possible to ask that question after seeing the film. It is this assumption of “neutrality” that has been the undoing of public discourse in the rest of the country on Kashmir. In a film about disappearances, arbitrary arrests, checkpoints and routine, habitual, everyday assault on ordinary Kashmiri men, women and children on the street by security personnel, the “voice” of the army is these actions. The signposts – the visual, the physical – of impunity are the voice and the speech of the army and indeed the Indian government in Kashmir. It is only when we shut this voice out that we begin to hear the voice of the people – those who spoke to Iffat, entire villages in mourning that cascaded to Wani’s funeral, those who brave lethal weapons of “crowd control”, suffer grievous hurt and yet pour onto the streets in protest asserting the right to mourn collectively and publicly – as also the very few outside who attempt to speak the language of solidarity (a language for the most part bereft of words by now).

In startling irony, I came across a farcical post on Facebook a week ago that talked of the BJP and its cow protection armies triggering a parliamentary debate on the banning of pellets because cows that strayed within firing range were blinded. The demand was also that callous Kashmiri owners of cows be prosecuted for wilfully sending their cows out to face the fire. And I broke down thinking it could well be a factual report. What is this country we live in, where even such an absurdity is well within the realms of the possible in our own imagination and in what we see around us? And where humour is no humour at all but cause for deep, deep sadness?

Speaking of cows and tipping points, the gruesome violence in Una has finally given birth to a resistance beyond measure. We have had the illustrious Bezwada Wilson in the news in the past week for receiving the Magsaysay award for his lifetime’s work to abolish manual scavenging and degrading labour performed by Dalits. While Kashmiris brave bullets on the streets, Dalits in Gujarat have called the largest, and most striking labour strike in recent memory – no Dalit will lift dead carcasses any more. “Since the cows are your mothers, fulfil your moral obligation and take care of your dead as you should,” they have said. In other words, take the merit and the dirt, both. This is no small strike. It is the caste system turned upside down.

So the gau rakshaks and their sarkari rakshaks can take full responsibility and ensure safe passage to their deceased mother-cows, lending their shoulders and bidding them a ceremonial-ritual farewell in their journeys to the afterworld.

And Dalits will finally hold their heads up in pride and march towards lives with dignity. But Dalits shall also now take pride in the fact that contrary to the pre-ordained order of learning in a caste society, it is they who have educated the upper castes (yet again, but this time in an unforgettable way) on the road to fulfil their moral-filial obligations and earn merit in this life and the hereafter. This should soon extend from carcasses of animals to the human dead (it has already spread to human waste) – cremation grounds, burial grounds, all places that depend on Dalits to handle “impurity” so that the upper castes can enjoy undiluted merit bolstered with unsullied purity. The scales have tilted and the upper castes shall bear the polluting burdens of their purity. If this is accomplished, we are a huge step closer to the annihilation of caste.

BJP MP Vinay Sahasrabuddhe’s interview in Times of India is telling: “Gau raksha is a popular theme and is a guiding principle of our constitution”. In another article in The Indian Express, union minister for social justice and empowerment T.C. Gehlot is quoted as saying that gau rakshak squads are social organisations, but the trouble in Una was that they rushed off on the basis of a rumour instead of stopping to “find out its veracity and then go”. So is it okay for squads to go after ascertaining the truth? And they take recourse to Article 48 of the constitution that enjoins the state to organise agriculture and “prohibit the slaughter of cows and calves and other milch and draught animals”.

But that is not all that Sahasrabuddhe says. He also hastens to assert that “Una is an isolated incident. There is no reason to draw sweeping conclusions and portray a frightening scenario…”

We must note that this comes after the declaration of a strike by Dalits. So what is frightening? Not the gruesome murder and flogging of Dalits and Muslims. That is routine and everyday – it evokes neither comment nor fleeting attention. What is frightening, especially to the ruling party and its fringe armies on the prowl, I suggest, is the consequences of the strike. Dalit mobilisation post Una is not an isolated incident. Nor will it just disappear. It is here to stay and indeed bears frightening consequences to the arrogance and impunity of caste domination. Article 17 of the constitution – the abolition of untouchability – is a fundamental right, our guiding principle and overrides completely the “guidelines” of Article 48: “Untouchability is abolished and its practice in any form is forbidden”.

Between Kashmir and Una, we have before us a new turn in the practice of politics. The deep regret is of course that it has cost us too much, we have lost way too much on the road to azaadi already.

Kalpana Kannabiran is a sociologist based in Hyderabad.