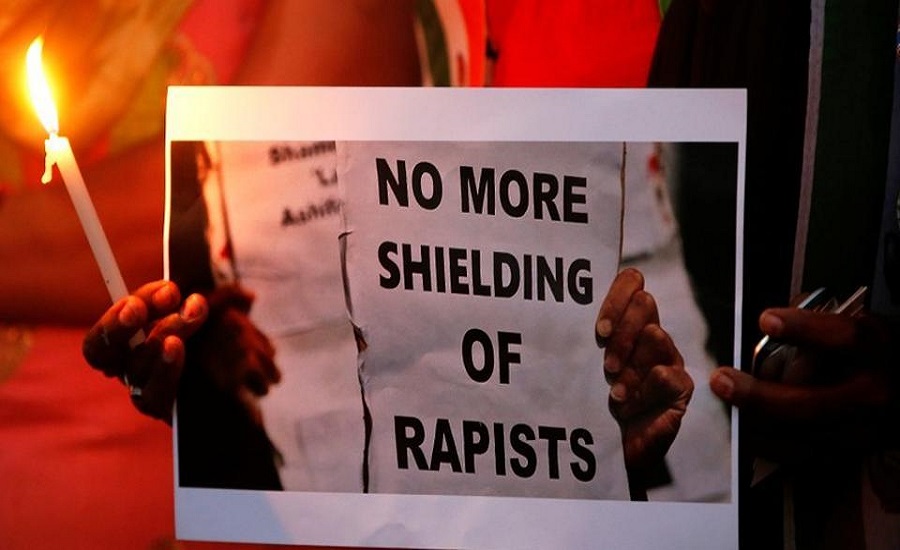 A candle light vigil in Ahmedabad against the rape of an eight-year-old girl in Kathua near Jammu, and a teenager in Unnao. — Reuters

JAMMU: Amidst the national and international outrage over the brutal gang-rape and murder of an eight-year-old girl in Kathua district, a 14-year-old girl, carrying a baby in her arms who she alleged was born a year ago out of rape, appeared at the gate of the Jammu Press Club here on Saturday, with hope she would also get justice for the assault on her two years ago. Accompanied by her father, she had come from her home district Kathua to draw attention of the media and the Mehbooba Mufti government.

“The minor girl alleged she was raped by a 28-year-old man, who is from ‘an affluent family and enjoys political patronage’, and said nobody is listening to the poor family,” says a PTI news agency report carried by several media outlets, including India Today and Business Standard .

“We knocked the door of the local police station and police’s higher-ups but justice eluded us so far,” the girl, holding the one-year-old child in her lap, said.

The incident took place in 2016 when the girl was just 12. When she was grazing her goats in the forests, the alleged accused identified as Bindu overpowered her. She cried for help but no one was there and he allegedly outraged her modesty.

The assaulter threatened her of dire consequences if she disclosed anything to the family members. She remained silent for next eight months till she had pain and was taken to the doctor.

The girl’s father told the media that he came to know about the alleged rape of her daughter eight months after the incident when she fell sick and was taken to a doctor for checkup.

“After being informed that she was pregnant, we lodged an FIR,” he said.

The family alleged that the local police tried to hush up the matter as they took money from the accused. The police denied the charge.

The police said the accused got bail from a court and later his DNA test did not match with the child.

However, the victim’s father alleged that the DNA test was conducted but it was fudged to save the accused.

He claimed that he was offered money to stay silent. “But I don’t need money but justice for my daughter and her child,” he said.

“The guilty was not arrested. Instead, then SHO told us to settle the case with Bindu by taking Rs 5 lakhs from the accused person. Then SHO suggested the victim not to identify Bindu as her rapist in future and shift allegations on someone else,” the girl was quoted as saying by The Rising Kashmir.

“The alleged accused is a Rajput and we belong to Bhagat community, no one listens to us. Uncle of the accused person is ex-sarpanch of BJP,” the local English daily quoted father of the victim girl as saying.

Interestingly, the police are now saying that her case was not closed and the investigation was on.

“We have not closed the case and in fact the father of the victim was asked to present the girl before woman cell only a few days back. However, he did not turn up,” PTI has quoted SHO of the local police station as saying.

In mid-January this year, an eight-year-old girl from Bakherwal community was brutally raped and murdered inside a temple in Kathua. Her body was recovered about seven days after she went missing from near her home. Soon after the arrest of accused persons, a local saffron outfit began holding protest demonstration in support of the accused. One such protest demonstration was addressed by two BJP ministers also. After the huge outrage following the submission of the charge-sheet in the Kathua court on 9th April, the two ministers had to resign.

The alleged rape of a teenage girl by a BJP MLA in Unnao of Uttar Pradesh hit national headlines earlier this month, about one year after the assault. After running from pillar to post for about one year seeking justice, she had tried to commit suicide outside the residence of Uttar Pradesh Chief Minister Yogi Adityanath on 8th April. She alleged she was raped by BJP MLA Kuldeep Singh Sengar in June 2017 but he was not booked.

On 3rd April, her father was brutally assaulted allegedly by MLA’s brother and his aides as he refused to withdraw his daughter’s complaint. Rather than booking those who assaulted him, the police booked the father in false cases and sent him to jail without proper medical care. He succumbed to injuries in judicial custody on 9th April. Only after the Allahabad High Court took up both cases suo motu, the Yogi government referred the case to CBI and both MLA and his brother were arrested last week.