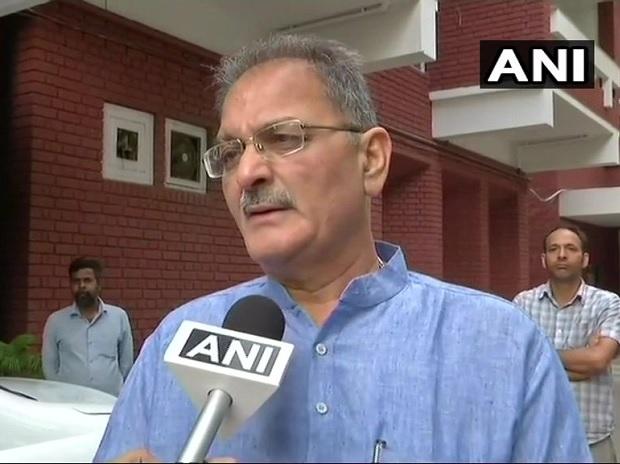 The Jammu and Kashmir Assembly speaker Kavinder Gupta, state BJP chief Sat Paul Sharma and six others were on Monday sworn in as ministers in the state’s PDP-BJP government led by Mehbooba Mufti. The major shake-up of the council of ministers, including six of the BJP and two of the PDP — follows BJP ministers Lal Singh and Chander Prakash Ganga resigning from the cabinet earlier this month after they were criticised for taking part in a rally in support of those accused in the rape and murder of an eight-year-old girl in Kathua.

Kavinder Gupta, described as an old RSS hand, will be the new deputy chief minister in place of Nirmal Singh, who submitted his resignation last night, officials said.Within hours of getting sworn in as the deputy chief minister of Jammu and Kashmir Kavinder Gupta today sparked a controversy after he called the incident of rape of an eight-year-old girl in Jammu’s Kathua a “small incident”. The minister later accused the media of misinterpreting his statement. Speaking to the media, Gupta said that the Kathua rape is a small incident and it should not be given too much importance. “It (Kathua rape and murder) was a small thing. We have to be careful in the future that such incidents are not repeated,” Gupta told reporters.

BJP national general secretary Ram Madhav, who attended the swearing-in ceremony, said today’s changes had no connection with the Kathua rape case. “Our government has completed three years in power so we decided to have a reshuffle in the cabinet and give an opportunity to new faces,” Madhav said, according to news agency PTI.

Chief Minister Mehbooba Mufti congratulated the newly inducted ministers, who were administered the oath of office and secrecy by Governor N N Vohra at the Convention Centre in Jammu today. The function was held at the convention centre instead of the Raj Bhavan because the J&K government had already shifted its base to the summer capital of Srinagar as part of its biannual ‘darbar move’, under which the government functions from the two capital cities of the state for six months each.

Besides Gupta and Sharma, the new BJP faces sworn in as ministers were the MLAs from Kathua and adjoining Sambha, Rajiv Jasrotia and Devinder Kumar Manyal, respectively. The BJP also upgraded Sunil Sharma, at present minister of state for transport, to the rank of a cabinet minister. BJP legislator Shakti Raj took oath as a minister of state.

Slogans of “Bharat Mata Ki Jai” were heard from the audience as Sat Paul Sharma and Shakti Raj took their oath of office.

The BJP has dropped Nirmal Singh, who is likely to be the new speaker, Health Minister Bali Bhagat and minister of state Priya Sethi, the lone woman who was removed, officials said.

Here are the top 10 developments around the Jammu and Kashmir PDP-BJP government Cabinet reshuffle:1) New Deputy CM Kavinder Gupta terms Kathua incident ‘minor incident’, clarifies later: Barely hours after he took oath as the Deputy Chief Minister of Jammu and Kashmir,Kavinder Gupta triggered a controversy today by terming the Kathua rape and murder case, which had led to nation-wide outrage, as a “small” happening that was hyped.It (Kathua rape and murder) was a small thing. We have to think over it so that such incidents are not repeated,” said, according to news agency ANI.

He was replying to questions on whether the ruling coalition was under pressure in the Kathua rape and murder case.

“Such challenges are faced by the government. It shouldn’t have been given all this hype,” Gupta said. He added that there was a need to ensure justice to the victim.

“We need to get the girl justice. These are some of the biggest challenges before the government today. We have given undue importance to this case, I feel, he added.

The matter was deliberately hyped, Gupta added. The case is in court, which will decide on it, he said.

An eight-year-old girl was alleged raped and brutally killed in a village in Kathua district. There was outrage and protests across the country over the crime. 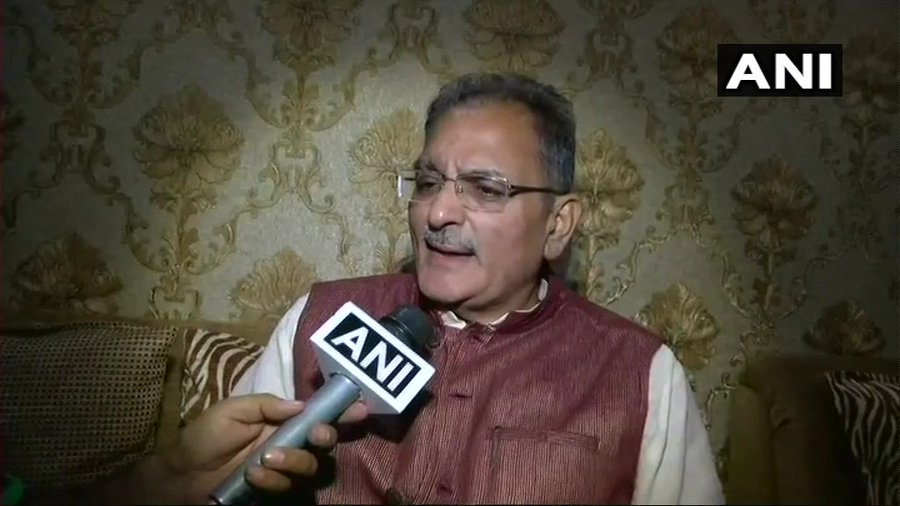 2) Omar Abdullah lashes out at BJP, Mehbooba Mufti: Omar Abdullah said that the BJP and Mehbooba Mufti need to clear their stand on the Kathua rape and murder case. His fresh attack came after an MLA, who had earlier attended a rally in support of the rape and murder of an eight-year-old girl, has now been promoted to a minister. He was referring to Rajiv Jasrotia, according to Times of India. However, Jasrotia denied having attended the rally.

2 BJP ministers removed in J&K for attending a pro-rapist rally & a MLA who is reported to have attended the same rally is promoted as a minister. Why are the BJP/ @MehboobaMufti confused about where they stand on the #Kathua rape?

The saffron party had been under pressure ever since two of its ministers – Lal Singh and Chander Prakash Ganga – took part in a rally in support of those accused in the case involving the rape and murder of an eight-year-old girl in Kathua. The two ministers eventually resigned. 3) Kavinder Gupta becomes J&K deputy chief minister: Fifty-eight-year-old Kavinder Gupta, who will take charge as deputy chief minister in Jammu and Kashmir’s Mehbooba Mufti government, first stepped into an RSS ‘shakha‘ when in his early teens and for decades has been an active political worker, who even spent 13 months in jail during the emergency.Dressed in kurta-pyjama and an ‘achkan‘ (a knee-length coat buttoned in front), Kavinder Gupta, who was the J&K Assembly Speaker earlier, was among eight sworn in as ministers in the state government today. RSS veteran Kavinder Gupta took the oath in Hindi.

Kavinder Gupta said his priority will be to ensure that the three regions of Kashmir, Jammu and Ladakh get justice and equal development.

Born December 2nd, 1959, Gupta is a graduate, who has three children including two daughters. He was secretary of the Punjab Vishav Hindu Parishad in 1978-79. He headed the J&K unit of the Bharatiya Janta Yuva Morcha, the youth wing of the BJP, for two consecutive terms from 1993 till 1998. Gupta has also served as the mayor of Jammu for three terms consecutively from 2005 to 2010, which is a record. He has also been a general secretary of the BJP’s state unit.

He was elected as an MLA for the first time in 2014 from the Gandhi Nagar seat where he defeated a sitting Congress minister Raman Bhalla.

He is known for his work for the upliftment of the poor and downtrodden sections of the society as well as efforts to eradicate social evils.

4) Speaker, BJP state chief among eight sworn in as JK ministers: Kavinder Gupta and seven others were on Monday sworn in as ministers in the state’s PDP-BJP government led by Mehbooba Mufti. “The new team has young and educated people and I hope they will work better,” said Mehbooba Mufti. 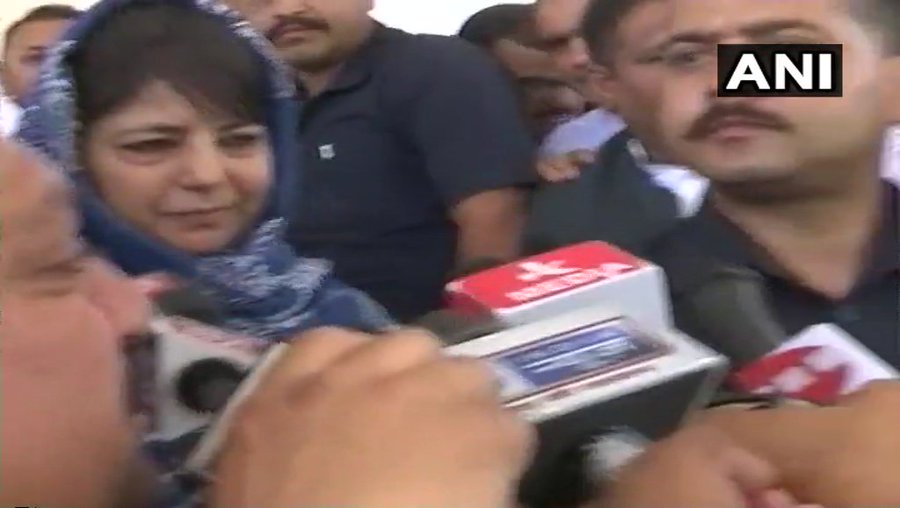 A new team has come. The old team had also done good work. The new team has young and educated people and I hope they will work better: #JammuAndKashmir CM Mehbooba Mufti on J&K Cabinet reshuffle

The new BJP faces sworn in as ministers were the party’s state unit chief Satpal Sharma and the MLAs from Kathua and adjoining Sambha, Rajiv Jasrotia and Devinder Kumar Manyal, respectively.

The PDP members included in the cabinet were Mohd Khalil Band, MLA from Pulwama, and Mohd Ashraf Mir, MLA from Sonwar.

“Cabinet reshuffle takes place depending on circumstances of the past and present and also taking cognizance of the challenges that lie ahead in the future. This is a very normal thing in any democratic setup,” Singh said, added ANI.

The reshuffle of Jammu and Kashmir’s PDP-BJP coalition government took place on Monday, after Governor Vohra the previous day extended a formal invitation for the event. The swearing-in ceremony was held at 12 noon.

Why doesn’t the AP police come clean about two missing tribal women? #Vaw #Disappearances
Scientists write to President of India against 'Political intervention' at ISRO
When Journalists Are Killed, Prosecutions Are Rare
Every second child in Gujarat under age of five years undernourished