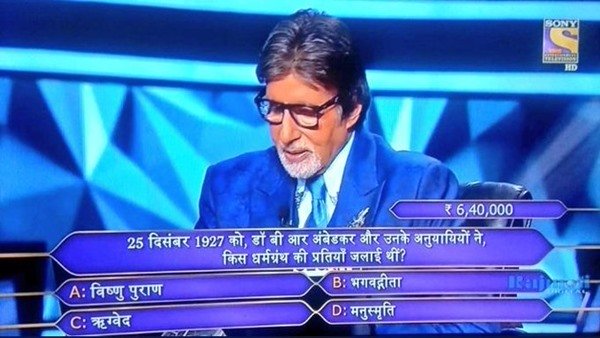 Amitabh Bachchan’s show Kaun Banega Crorepati season 12 recently landed in trouble as people filed an FIR against the show’s makers and the host in Lucknow, for hurting Hindu sentiments in the latest Karamveer episode. For the unversed, social activist Bezwada Wilson and actor Annup Sonii recently appeared on the show as guests.

During the game, host Amitabh Bachchan asked a question for Rs 6,40,000 which was related to Hindu-text Manusmriti. The question was, “On 25 December 1927, Dr BR Ambedkar and his followers burned copies of which scripture?” with the options A) Vishnu Purana, B) Bhagavad Gita, C) Rigved, D) Manusmriti. The correct answer to this question was D) Manusmriti.

While explaining about the incident, Amitabh Bachchan said, “In 1927, Dr BR Ambedkar condemned the ancient Hindu text Manusmriti to ideologically justify caste discrimination and untouchability and he also burned copies of it.” (sic)

Well, this question didn’t go down well with the netizens, as many of them started trolling the show for running the ‘leftist propaganda’ and hurting the sentiments of Hindus. Filmmaker Vivek Agnihotri too expressed his disappointment over the same and shared a clip from the show on Twitter. He wrote, “KBC has been hijacked by Commies. Innocent kids, learn this is how culture wars are win. It’s called coding.”

Apart from him, many netizens also expressed their anger on Twitter. Have a look at some of the comments:

“This is out of desperation to show BR Ambedkar as anti-Hindu which he was not. They want to divide Hindu community on the basis of caste. They are stripping themselves through these kind Propaganda. #BoycottKBC.”

Bachchan’s name trended after a section of netizens targeted him saying he has humiliated Hindus by asking a question about burning Manusmriti in the show.

“It a shame on Amitabh Bachchan who is only concern about his income, they can make lakhs of questions on KBC but prefer to be controvercial quiz questions which as a indian every time , some where this should be stopped,” tweeted a user.

“Amitabh Bachchan, who has reached this stage only because of Hindus, does not leave any chance to humiliate this Hindu religion. We do not blame him, but we Hindus who gave him everything. I strongly condemn Amitabh Bachchan’s question in kbc. Boycott kbc completely,” retorted another user.

“Mr Amitabh Bachchan can you dare to ask any questions like this on Quran? You will face the consequences. Hindus are peaceful doesn’t mean they can tolerate insult of our Ancient religious culture and heritage,” warned another user.

However, a section of netizens also came out in support of the veteran actor.

“I genuinely don’t understand why there’s an FIR against Amitabh Bachchan. It’s something that happened in the past and they just asked a question on it,” shared a user.

“Why Amitabh Bachchan ? If you wana do FIR then do on the person who gives AB questions. Reading a question from what has happened in history & explaining it can never be the issue,” explained another user.

Meanwhile, some netizens also alleged that this might be a publicity stunt for the sake of TV ratings.

“FIR filed against Amitabh Bachchan, KBC makers for asking a question on burning Manusmriti. This action will increase TRP of the show. #KBC2020,” tweeted a user.

The problem arose following a question that Bachchan asked in the Karamveer episode. Social activist Bezwada Wilson and actor Anoop Soni were guests on the episode.

The question for Rs 6,40,000 and was: “On 25 December 1927, Dr. BR Ambedkar and his followers burned copies of which scripture?” The options given were, a) Vishnu Purana, b) Bhagavad Gita, c) Rigdev, and d) Manusmriti.

The right answer was Manusmriti.

Explaining the answer, Amitabh Bachchan said in Hindi that in 1927, Ambedkar condemned the ancient Hindu text Manusmriti and also burned copies of it to prove a point against caste system.